2015 is the 50th anniversary of a statement that has gone on to shape the 20th century: Moore’s Law. It states: “The number of transistors that can be fitted onto an integrated circuit will double every 24 months.” What this translates to for the average consumer, is that computers double their processing ability every 24 months or so. This statement is not really a law, but rather, a bold prediction of the future that Gordon Moore, intel’s founder, made based on his observations of the then burgeoning electronics scene.

Many electronics companies in fact, have used Moore’s Law as a guiding principle in their Research and Development of integrated circuits and computers, aiming to follow the exponential increase in transistors that the “law” follows. Transistors are present in every electronic device, and they serve as building blocks of electronic components and machines. Like proteins are to cells, so are transistors to electronics.

What then, is a transistor? A transistor is essentially a switch. Computer processors in your smart phones and laptops today has millions of these small “switches” in them. Intel’s latest commercial 8-core i7 Haswell chip (the commercial flagship chip of choice if you were to buy a PC at the store today) has 2.8 billion of these transistors, all in an object with a physical footprint of a matchbox. They are laid up in a certain order like how a normal circuit would be laid up, in series or in parallel, except now there are billions of them in a circuit. These circuits execute commands by passing electric current through the labyrinth of transistors. When a voltage is applied, transistors simply yield a result of a ‘Yes’ or a ‘No’ (a 1 or a 0). The computer takes these electric signal codes and translates them into a string of texts on screen (101000001010101) that humans can then see and manipulate. It is this finite permutation of numbers and commands that allows computers to execute calculations and computational processes. The more switches and more permutations there are to switch combinations, the more a computer is able to process more commands. This makes a computer with more transistors inherently more powerful than a computer with less. 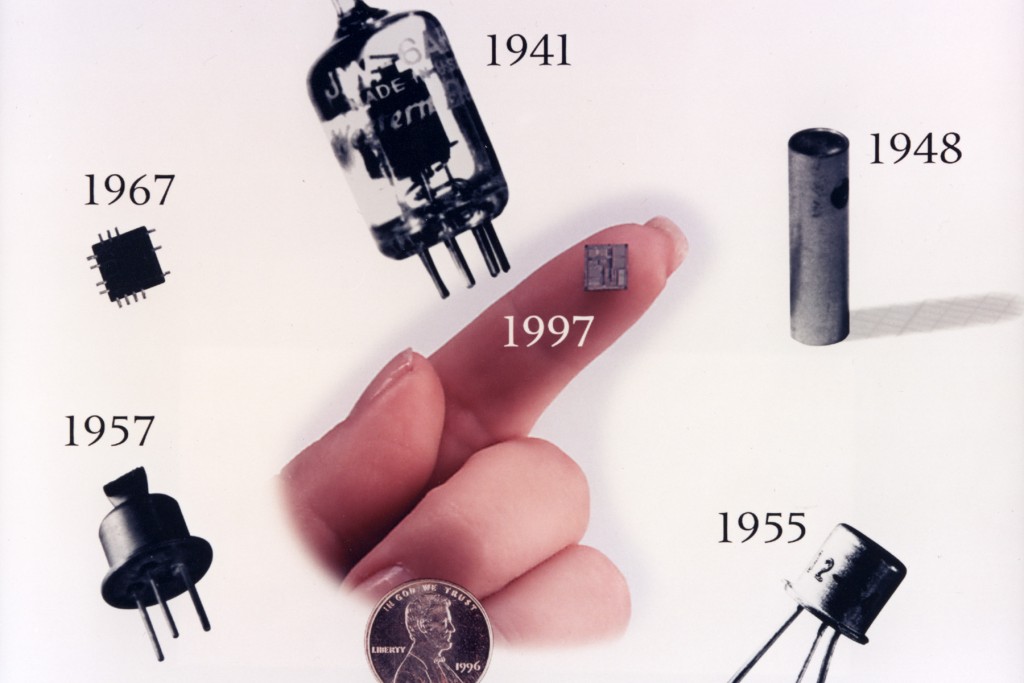 Evolution of transistor designs. All of them are single transistors except the one from 1997 which is a chip that consists of hundreds of thousands of transistors.

Transistors used to be built exclusively with electrodes in vacuum tubes. These were physically large and cumbersome to deal with – imagine having a computer with millions of beer bottle-sized transistors serving as switches! The discovery and invention of semiconductors made these big, bulky tubes obsolete as a means to control electric currents. The advancement in semiconductor designs was followed by the revolution in solid-state electronics which allowed transistors to shrink, since semi-conductors did not require the empty vacuum spaces to manipulate electric currents. Companies like Intel and Fairchild led the way in the 60s and 70s. And that is how we arrive at the Moore’s law. Transistors have effectively been shrinking at an exponential rate, and this has allowed circuit designers to fit ever more of these switches to create ever more powerful computers.

Alas, this ‘law’ will definitely have to come to an end when it does not become economically viable to physically shrink transistors anymore. Sometimes it does not make sense to continue making a device as powerful as possible for the sake of it. For now, computing needs continue to outstrip the supply and advancements in processor designs, but this may not always be the case. Other factors like reliability, power consumption and effectiveness are coming to the fore, and the number of transistors in a processor isn’t always everything. Apple’s new macbook for example uses Intel’s M chips which have less transistors than older chips but are optimised for power consumption and less computationally intensive applications – not everyone needs a super computer to surf the web or write essays on Word.

Despite this definite certainty of the law’s demise, the Moore’s Law continues to confound observers and academics, surviving long beyond what Gordon Moore himself thought was possible. Throughout the 20th century, many have predicted the demise of the Moore’s law and failed. Today, most experts believe 2020s will see this coming to pass. But as for today, the law is still law and we continue to enjoy the benefits of these technologies that is governed by Moore’s Law.

About the Author
Zhimin is a third year Mechanical Engineering student who finds reason to be curious about other disciplines. He is an amateur triathlete, divemaster and a paratrooper. An avid adventure-seeker, he never backs down from a challenge and enjoys pushing the boundaries of the human condition.