Nearing the end of the summer break, I had the pleasure to attend a five-day forum and workshop hosted by a fledgling organisation (Passage to ASEAN – P2A) at Mahasarakham University, in the Northeast of Thailand. The purpose of the forum was to further promote P2A’s overhanging aim of increasing student mobility amongst the ASEAN member nations, and to connect delegates from different universities across the region. In the presence of 44 other delegates, I attended as the only representative of NUS and Singapore. 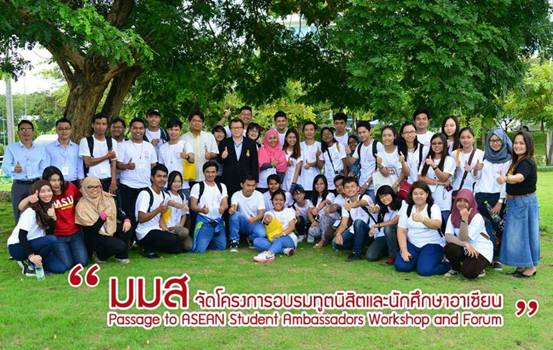 Participants of the P2A workshop and forum

My main motivation to go for this was my intrigue over how ASEAN and representations of it feature differently and unequally in the different nations within it. In Thailand, ASEAN is a recurring topic in public domains and discourses. Especially concerning its presence in the educational milieu, most students would be fairly acquainted with an idea of what ASEAN is, while some would further vouch for the organisation’s capabilities to drive both national and regional prosperity. Drawing from recent examples I have come across, the cover of Mahasarakham University’s handbook brandishes a cartoon portrayal of ASEAN’s regional cooperation. The institution’s campus also hosts a huge lawn message that celebrates the community’s onward march to the end of 2015 – the beginning of the ASEAN Economic Community (AEC) – a seemingly watershed period of the organisation’s recent history as the bloc strives for regional development through further economic integration. For many, AEC stands in the middle of their gazes.

The existence of this P2A organisation – an organisation animated by the ‘essences’ and potentialities of ASEAN, itself meant to engage in youths in the region – is testament how much ASEAN is at the centre of many socio-cultural worlds in Southeast Asia. But after her recent trip to Singapore, a Thai delegate asked me, “Do Singaporeans care about ASEAN? I didn’t see anything about it there!”

It was on the second day of the conference, where each delegate was invited to share what they hoped would be achieved after the five days – the objective of the sharing being to introduce the individuals’ initial expectations of P2A’s overhanging aim of student mobility within the ASEAN region. But as time went by, each little speech digressed into momentary articulations of what each individual student wanted out of ASEAN. In this, I listened to multiple passages of what challenges and issues the other ASEAN nations faced, but from the perspectives of university students. It became reflections of their individual challenges: the issues voiced out had or would, in some way, concern their own personal livelihood. Progressively, ASEAN became an endpoint in their stories – as each person gave different meanings to ASEAN – how at the end of 2015, things will begin to change for their countries and more importantly, for themselves.

So why then does ASEAN feature so little in our lives as Singaporeans? Or more coherently, should Singaporeans genuinely need to care about ASEAN in the first place? The blunt answer might be no. It seems, at least, most Singaporeans have gone fine without a more rigorous engagement with ASEAN (or knowledge of it) – so it seems that we need not face that direction. So when it came to my turn in the sharing session, I expressed what I thought was an existence of a general apathy in Singaporean society towards all of this. My minute-long moment was a delivery of intrigue, mixed feelings and essentially, a dialogue absent of any personal investment and aspiration. As I ended, I thought: was it just me that was not able to share in others’ excitement and hopes of ASEAN?

What ensued right after was an hour-long session – essentially a period of facilitated critique – focused just on Singapore. An outpouring of negative sentiment came my way as delegates shared what they thought of both Singapore and Singaporeans. The director of the organisation curated these little comments, piecing each and every one of it to create a mosaic – one that arcs somewhat perfectly to subsume every individual aspiration and story into the larger ASEAN march and goal. He explained and re-made the ‘facts’ of Singapore’s strength, position and apparent (or consequent) regional apathy to fit within an idea that appeased the sensibilities in the room. The idea being, despite whatever they know, think and perceive – ASEAN is still a coalition that binds 10 nations together, in aid and service. In essence, he presented again the idea of regional cooperation, ultimately cognizant with the thread of tales and aspirations – that was once affronted by my representation of Singapore and/in ASEAN. The room calmed down as ASEAN was restoratively justified.

It seems strange that at the end of 2015, ASEAN will enter this somewhat epochal moment, and yet most Singaporeans are completely oblivious to it. However, this is not me berating Singaporeans for not ‘caring’ about what’s going on around them but rather, it is me asking how much beyond the individual we can find to be the reasons behind why he or she isn’t engaged in a collective that they are supposedly affiliated to and affected by? How much are the current streams of regionalization (and regionalizing identities) under an obvious ASEAN aesthetic successful in equalizing and levelling peoples of – at any point – different conditions and contexts? This brings me to a final question: why ASEAN at all? These questions help me segway into saying that ASEAN is at the receiving end of multiple currents of meaning-making – ASEAN, or what is ASEAN, is different to many different people. With many individual desires, goals, meanings and stories – all diluted into a single representation (or an amorphous mass) – I wonder how much of those expectations will be met, especially when individual actions are so, so uneven.

About the Author
Alif  is a third year Southeast Asian Studies and History major. Everything beyond this is an exercise of creative appellation. He just proved his own point.