To call this a hair-raising experience would be an understatement.

Okay, puns aside, this truly was quite a terrifying experience for someone as shy as myself. I signed up because I wanted to push myself out of my comfort zone, and do something crazy. I mean how often do you get to be a part of a hairshow by Shunji Matsuo right?

Celebrity hair stylist Shunji Matsuo has more than 40 years of international hairstyling experience in countries like Japan, Europe and the United States. Shunji, or Shunji-san as he is known by his team, has had his stunning hair creations featured on top fashion runways like Donna Karan and Calvin Klein, as well as in magazines like American Vogue and New York Magazine. He has even styled Madonna’s hair before! Shunji Matsuo has also opened his own chain of hair salons in Singapore and has expanded the chain to 15 salons around the region in Malaysia, Vietnam, Philippines and Indonesia.

Shunji is no stranger to running hairshows, and prior to this year’s impressive display, he had held a similar hairshow in Tembusu three years ago with both student and professional models. 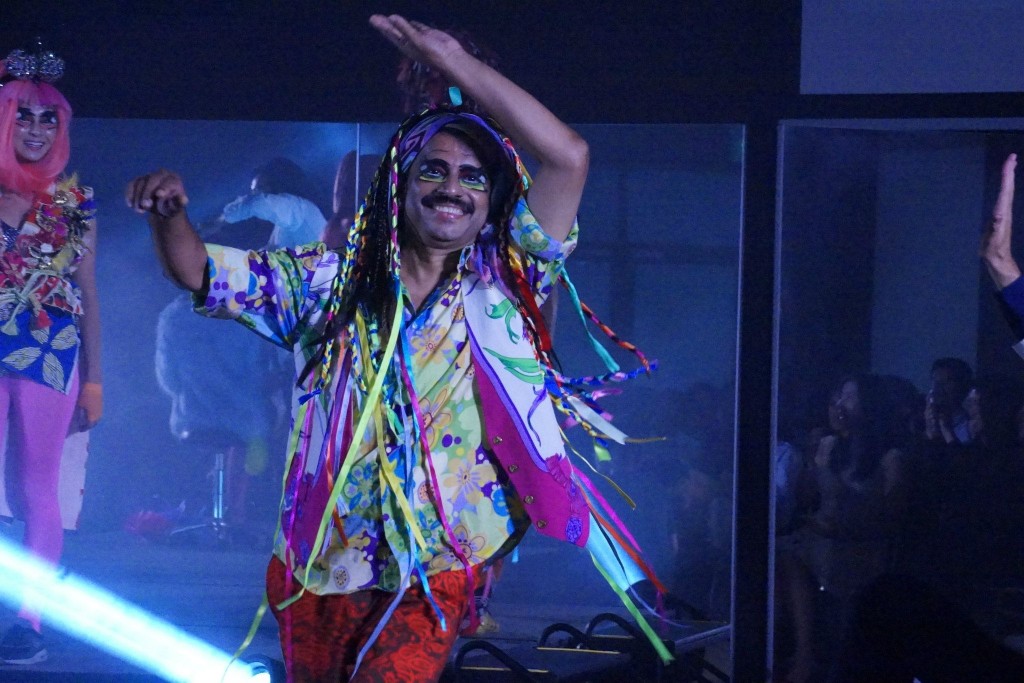 Associate Professor Prakash getting into the swing of things

On the day of the show, we assembled in the Reading Room at 11am, not quite sure what to expect. The team quickly sent us to our respective hair, makeup and rehearsal stations, and preparations began. It almost felt like a scene from America’s Next Top Model. If anything, I would say that the first few hours were the strangest. Casual wear paired with over-the-top hairstyles and funky makeup made us all walking fashion disasters. It was quite funny to watch.

The best part, obviously, was seeing everyone dressed up with their final hair and makeup. Seeing everything come together made me realize what novices we were in this highly creative industry.. We were focused on each of the separate components… our weird hair, our funky head pieces, our almost clown-like makeup. Yet, despite their solitary weirdness, when put together, everything seemed to work.

I was extremely impressed with the Shunji Matsuo team. As the saying goes, “the only limitation is your imagination.” As students, we tend to become focus on the facts and stick to the tried and tested, leaving little room for imagination. Unlike us, the team explored the wacky and wonderful, and showcased their creativity in imagining and designing each of our costumes and makeup, creating a work of art from absolutely nothing. 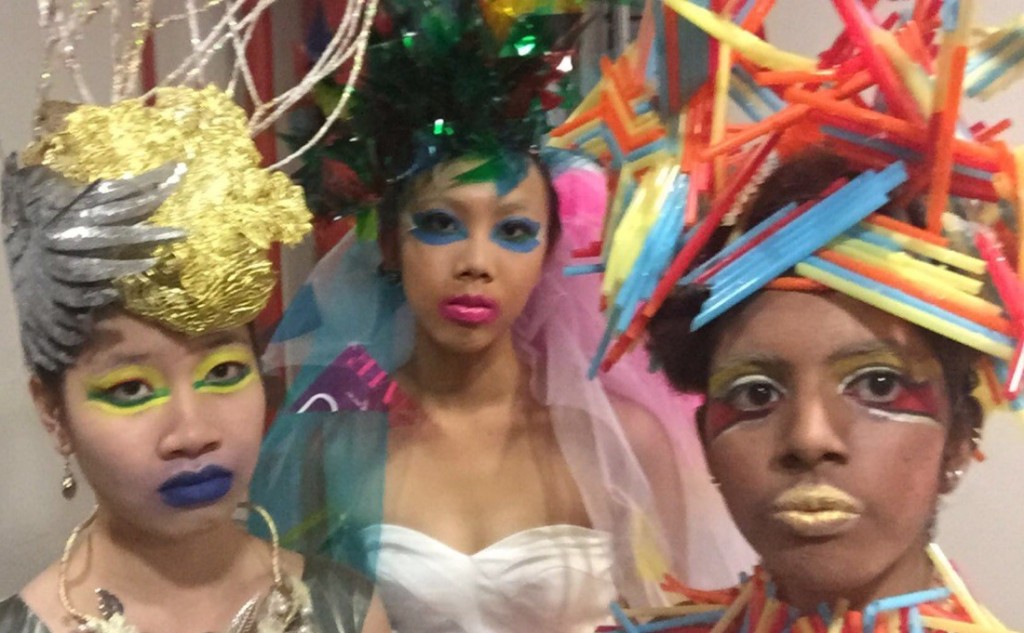 When we smiled, we looked like female versions of Chucky coming to haunt you

Six hours flew by, and soon it was show time. After a quick rehearsal right before the show, just to make sure we didn’t trip in our killer heels, we were ushered backstage to wait for the show to begin. We were quite a sight: thirty or so people, all clad in extravagant costumes and headpieces, squashed into the tiny backstage waiting area. 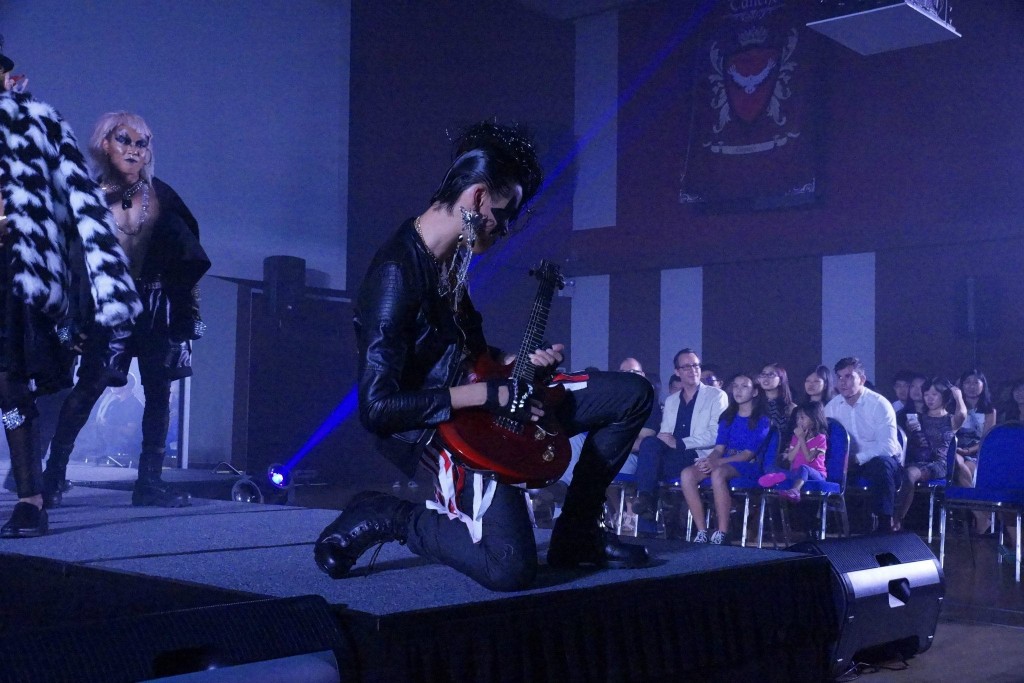 From backstage, the hair show was pretty much flashing lights and loud music. I wish I had been able to witness the show from the audience, but I guess I can do that through the video. That said, what may be of greater interest to you, would be to find out what the show was like from a model’s point of view! So that’s where I come in.

I was secretly quite nervous backstage. I have never liked being in the centre of attention, let alone being seen catwalking on stage. Dressed like this, all eyes would surely be on me as we took turns walking down the catwalk.

But I took comfort in the heavy makeup and my oversized headpiece. Chances were, my friends would not recognize me. For the moment, I could pretend to be someone I was not. After all, it was not too far off from how the unassuming Clark Kent transformed into Superman just by removing his glasses and changing into his super suit.

And so it began. 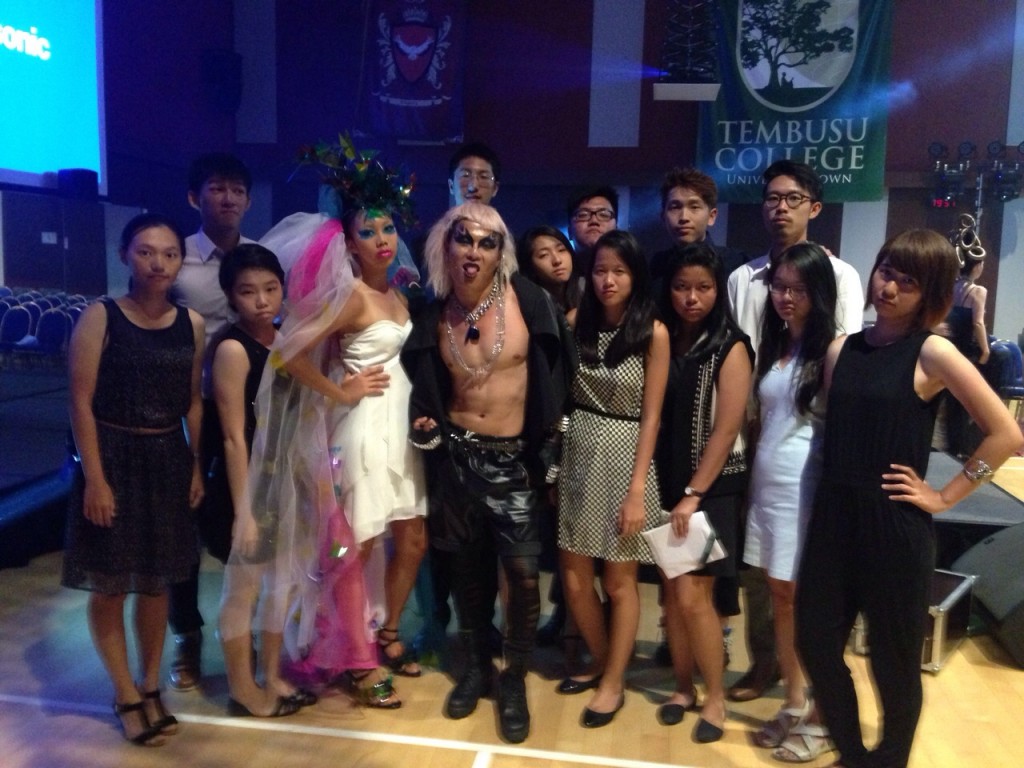 The moment I stepped up on stage, I no longer felt any fear or nervousness. I was just here to have fun. Initially, I thought I would just see an unrecognizable blur of faces, but instead, I was greeted with a clear view of each and every member of the audience. It was a wonderful sight to see the wonder on the audience’s faces. Even the adults had the same childlike wonder in their eyes as the children in the crowd.

My favourite part was seeing familiar faces in the crowd. My friends looked rather confused, and were engaging in hushed discussion about my identity. Only when I made eye contact and grinned at them, did they smile back in return, obviously pleased that they had identified me somewhere beneath all the showy makeup and clothes. 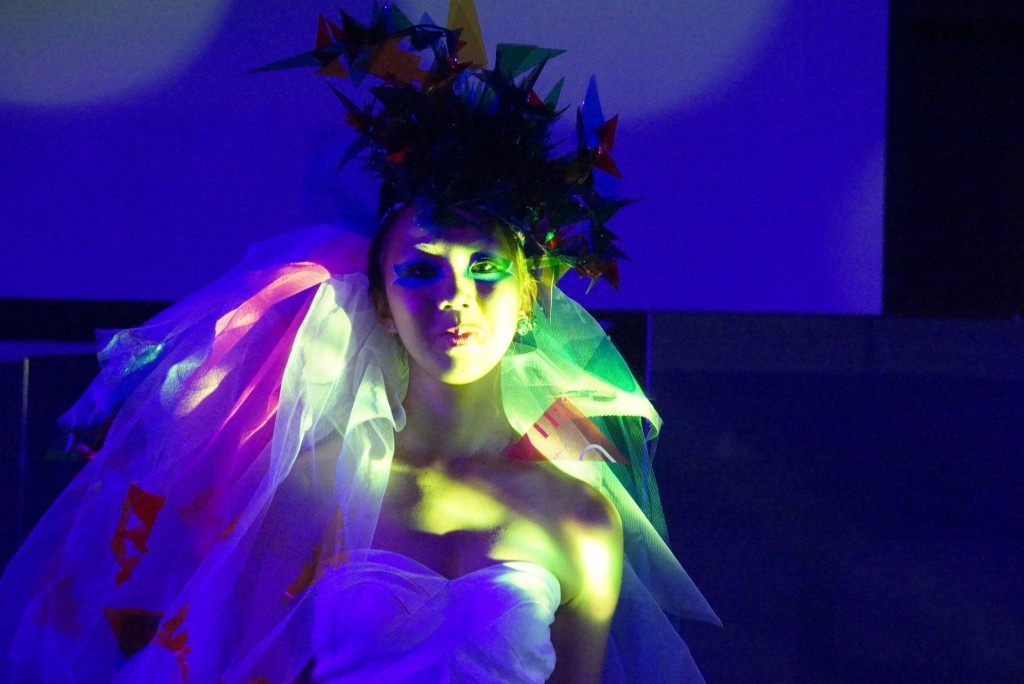 Walking down the runway

It was an honour to be able to model in a hair show by Shunji Matsuo and his team. I would also like to give a shout out to Dr. Margaret Tan and her organising team who had put in lots of effort to put this show together. Even though the attention was on the models, the people who were working behind the scenes were the true stars.

Upon reflection, I realised that I learnt an unexpected lesson from my hairshow experience with Shunji Matsuo, which is to be true to ourselves.

In 6 hours, the models were transformed from serious professors and fresh-faced students into the unrecognisable. To quote author Christopher Barzak, “nothing is more real than the masks we make to show each other who we are.” Imagine the masks that we have spent a lifetime creating to showcase to the world, the masks that we have carefully designed to reflect who we want to be, the masks that may not show who we really are.

This experience made me realise how easy it is to hide behind a representation of who you are designed to be, whether by yourself or another person. It was almost scary how quickly I adjusted to, and how comfortable I felt, hiding behind my mask on stage. It protected me from judgment and fear. After all, this wasn’t really me, this was merely a well-planned representation of what I should be. And that got me thinking… how comfortable have we become in hiding behind our intricately designed ‘masks’ in real life? And after all this time, have our ‘masks’ become a part of who we are? Can we even remove these ‘masks’ without removing a part of us?

About the Author
Grounded in the logic of numbers, lost in the beauty of words and on a mission to find her hakuna matata. Andrea is also a food and travel blogger, she documents her foodie finds and travel adventures as often as she can, in between attempts to balance work and play.