“In this bollixed-up world where everything
Old is new again. (Just like this toilet basin.)
In things we trust. How will this wash
with the top? Caught red-handed, this marginalia
Has tended to detract from the key issue:
What really happened here and where were you?”
(Extract from ‘National Grain [After a visit to Tun Tan Cheng Lock Baba House, 157 Neil Road]’, Yeow Kai Chai)

I think having gone to the National Gallery for the first time with my grandmother in the company made a lot of difference – for she would infuse the past with the present in what she said, noting, I used to walk here, that used to be a pier; there, that was where they surrendered.

I never thought I’d still be able to come in to see this place at this age.

She sits in a wheelchair in present day, when we head out, and that was how it was when we toured the Gallery. It reminded me that while my feet were tired in the now from plodding around on this little piece of the earth, one day it might very well be so that my feet are no longer able to carry me forwards on their own and other ways of function, of movement might find me.

This is perhaps a little like how certain spaces now, old but made new, no longer serve the same purpose. The former City Hall chamber echoes only when visitors to the Gallery speak now, when the shoes of the staff patrol click against the floor, only hears camera shutters through the days. Where the Chief Justice’s office used to be, now rests a carefully curated, cordoned off display set, his desk and chair standing as props on a stage. Where solemn holding cells might have been, now sit sites for photography, where visitors indulge in the novelty of an experience so far from their reality that their senses of pose and play turn on. These spaces of the past hold a certain history, but in their remaking, distance us from access to a certain collective past.

Art and architecture capture history by representation, and by restoration are helped along against the test of time. Yet because restoration reframes, reimagines the space that is made new, it engages in the idea of presenting itself again, perhaps in a different way or form to us. Inevitably, our means of access to the past can only be an indirect one, layered both by time, and by representation of space, even as we find ourselves in the very same place.

“What really happened here and where were you?” 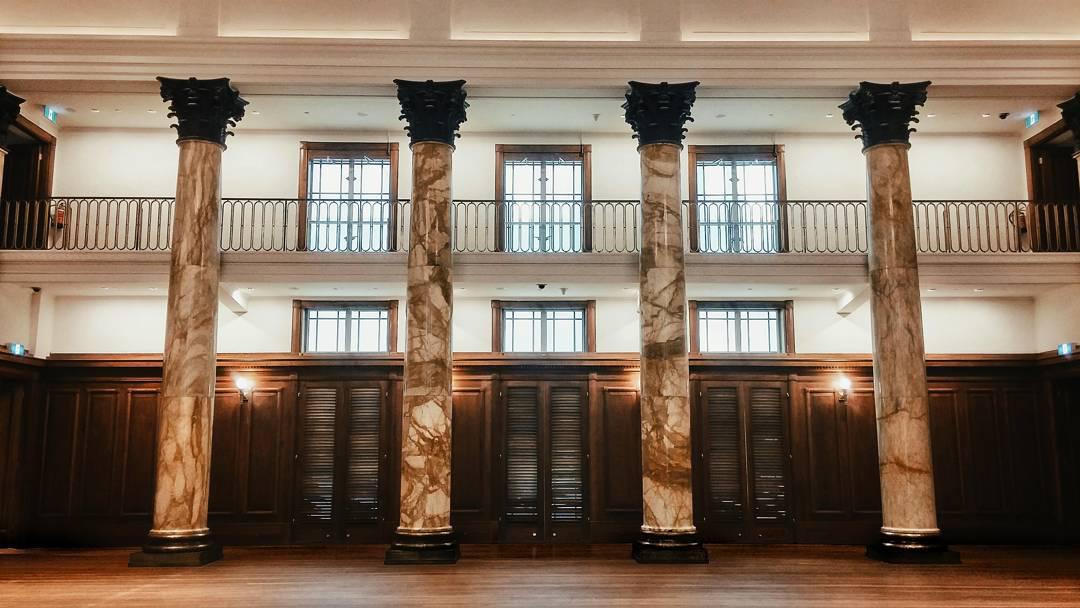 The City Hall Chamber, sometimes also referred to as the ‘Surrender Chamber,’ which witnessed the surrender of the Japanese forces in 1945, as well as other important events in Singaporean history and politics – the swearing-in of our first Prime Minister and Cabinet, and the inauguration of our first Head-of-State, both in 1959. (Image by Ong Kah Jing)

However, this is not to say that the National Gallery fails to be an effective restoration work; rather, it lives in a type of re-invention. Built upon the foundations of marble, stone and wood, upon an icon of colonial architecture, are steel and glass, and more crucially, oils, watercolours, prints, charcoal, bronze and every other medium employed by the various artists whose works make feature within the Gallery walls.

Recreating the colonial space of the Courts and City Hall speak then a message embodied in every canvas and sculpture it houses. It now establishes the monuments as a place of recognition and celebration for not simply local, but regional efforts, regional struggles, and regional reactions from all over the wider Southeast Asian region in the form of art. Significantly, there are works that categorise themselves as definitive, as reinventive, as proving points in a long struggle to name itself apart from and beyond colonial language and vision. These art pieces, as the Supreme Court wing’s exhibition is aptly named, attempt a gradual manoeuvre between declarations and dreams, and as a whole illustrate regional trends that evolve through both foreign and familiar mediums and genre, against the ever constant goal to imagine and reimagine itself as national. As we pace through the many galleries and many sections of each gallery, we walk through a multiplicity of histories: from different people and perspectives, of different people and perspectives, of nations, through larger schemes of struggle and strife, through varied artistic styles and movements, over centuries of art. 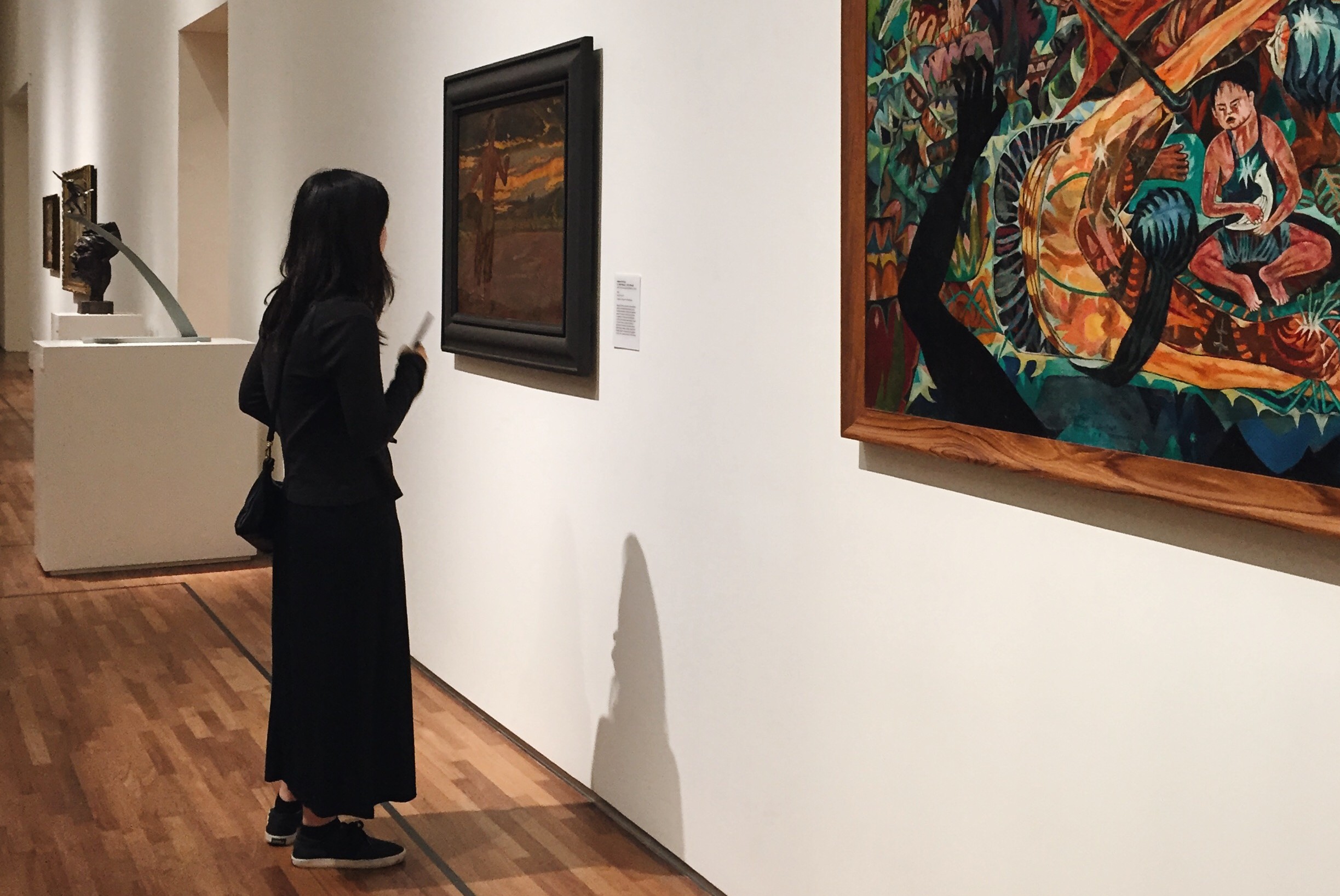 A friend of mine, Kim Tan, at the UOB Southeast Asia Gallery, ‘Between Declarations and Dreams: Art of Southeast Asia since the 19th Century’. (Image by Vanessa Teo)

When it comes down to it, the National Gallery exists as a monument, beyond any simple sense of a recollected past, combining a celebration of struggle and triumph and history in both form and content. Within the Gallery, the City Hall wing boasts the gallery of Singaporean art since the 19th century – titled Siapa Nama Kamu? It walks us, as we walk, back into familiar narratives, but through plural narratives and voices, through the reinvention of this space, perhaps even of this country and of this people.

I don’t think we’ll have an answer just yet to this question the exhibition poses, even now. But, what I do believe is that the National Gallery can be a stepping stone for us to look both back and forwards when we try, now and always again, to respond with who we are, who we will be.

Vanessa is a writer, but more than that, mostly a wonderer. Occasionally disappears from her battle with English Literature, into the sun, sand and sea.