The first instalment of this article dealt with the creation of elements through nuclear fusion in stars. In this latter part, we explore another type of nuclear reaction; fission.

In the wake of disasters like the Fukushima Daiichi incident, the words ‘nuclear’ and ‘radioactive’ are generally accompanied by nightmarish images of abandoned homes and men in contamination suits. But for all the superficial attention radioactivity has received the media, it remains very much an enigma in the eyes of the general public. 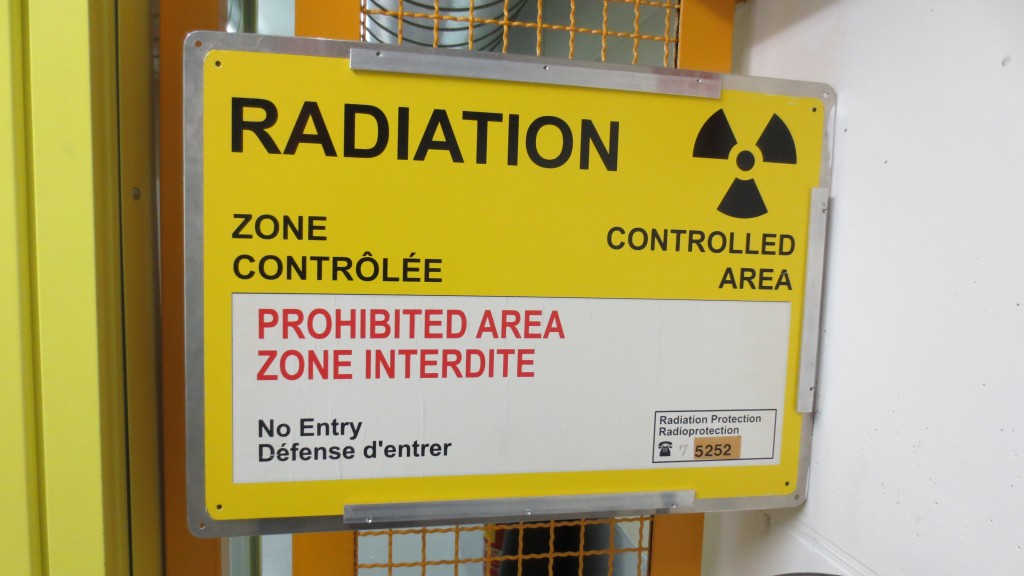 Radiation warning inside a research facility at CERN, a European-based organisation that runs the largest particle physics laboratory in the world.

Of all the elements in the periodic table, it is the heaviest ones (the actinides, briefly mentioned in part I) that are radioactive. Atoms with heavy nuclei are unstable, and mitigate this by decaying into more stable configurations, emitting subatomic particles or energy that we call radiation. Different elements decay at different rates, and this is measured by half-life; the average time taken for half of the atoms (in a given sample) to decay. The more unstable the element, the shorter its half-life, and the faster it decays.

The volatility of radioactive elements makes them prime candidates for nuclear fission, the reverse of fusion. In fission, a large and unstable atom splits into two smaller and more stable ones, liberating energy. Over time, mankind has learned to control this process in nuclear reactors. In a reactor containing fuel such as uranium, heavy atoms are bombarded with neutrons at high speed. This triggers fission, forming smaller atoms (like krypton and barium) along with more neutrons. These free neutrons proceed to collide with other uranium atoms, creating a chain reaction (somewhat analogous to billiard balls ricocheting on a table). The resulting heat is used to boil water into steam, driving a turbine to generate electrical energy.

Nuclear power produces lower carbon emissions than traditional fuels such as coal and oil, but concerns persist over issues of safety and disposal of radioactive wastes. The large amounts of energy created means that fission must be supervised very carefully; in reactors, control rods are inserted between uranium fuel rods in order to moderate the rate of reaction, and ensure that temperatures do not run too high. Uncontrolled fission reactions are highly destructive; as an example, the atomic bomb dropped over Hiroshima utilised a fission reaction which consumed less than a single kilogram of uranium, but generated an explosion equivalent to 15 thousand tonnes of TNT.

At this juncture, readers may wonder; since fusion and fission are opposite processes, why do they both produce energy? In fact, why do nuclear reactions produce energy at all? The solution lies in the famous equation E = mc2, as derived by Albert Einstein. In this equation, E is the symbol for energy, with m representing mass and c representing the speed of light. Simply put, energy and mass are interchangeable, with respect to the speed of light squared.

When fusion or fission occurs, the atom/s produced are actually slightly lower in mass than the atom/s present before. So where does this lost mass go? Empirical measurements have shown that the energy emitted corresponds exactly to the mass lost in the process of reaction, as predicted by Einstein’s formula. Elements lighter than iron tend to undergo fusion, while heavier ones tend to undergo fission, in order to increase their nuclear stability and release energy. Although the energy liberated per atom is extremely small, one must remember that a given sample of fuel contains billions upon billions of such atoms, multiplying the effect prodigiously.

Whether fusion or fission, nuclear reactions have played an immense role in shaping the world as we know it. If not for fusion in stars, there would be no elements heavier than hydrogen and helium throughout the cosmos, and certainly no complex forms of life. Looking ahead to the future, nuclear fission may yet provide us with a sustainable energy source for decades or even centuries to come. The pioneering work of greats such as Einstein has allowed us to gain a better understanding of the inner workings of these two processes, and push the frontiers of scientific knowledge. With mastery of nuclear reactions, humanity is better equipped to face the challenges that tomorrow may bring.

About the Author
Wei Xiang’s two favourite things are books and music. His idea of a good night is one spent reading a thought-provoking novel, with an album playing softly in the background. Of course he has many other interests as well, but those tend to involve, you know, going outside.