If Professor Tommy Koh were a genie in a bottle, calling upon him might not quite grant a person three wishes—but he might oblige with his signature three points. And as the winner of the Program on Negotiation’s 2014 Great Negotiator Award and the Ambassador-at-Large at Singapore’s Ministry of Foreign Affairs, one could reasonably expect his points to be well-balanced and compelling.

Placed in the hot seat, Prof Koh responded to the questions with ease. He was candid and personable, tempering his frankness with humour. At times, he felt compelled to defend a point of view that he did not share, simply for the sake of providing a balanced viewpoint. Yet this never made him seem unclear of his own stance. 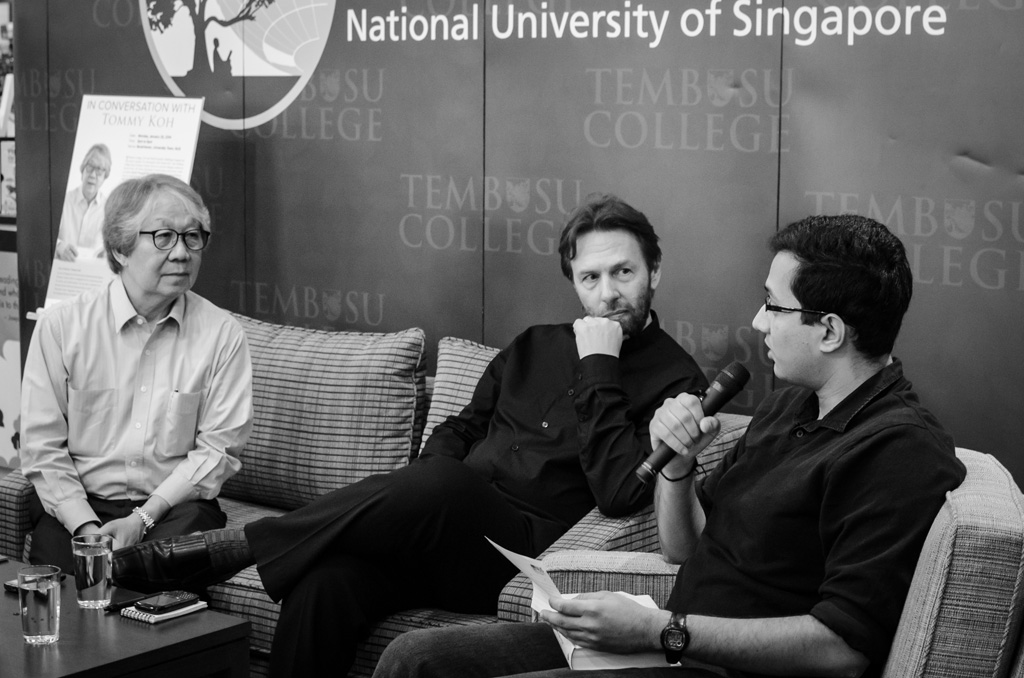 On the topic of freedom of expression in Singapore, he acknowledged the virtually complete freedom offered by the Internet, but noted that Singapore would not want the total freedom enjoyed by some societies in the contemporary West. He said that for one, Singaporeans are “culturally sensitive to the need to respect each other’s faith”, and they also do not indulge in hate speech. In response to another question on the lack of a minimum wage in Singapore, he raised the examples of Denmark and Switzerland, both of which do not have a minimum wage; yet they are egalitarian societies, and their cleaners, gardeners, security guards and bus drivers earn much more than their counterparts in Singapore.

He said that the low wages in Singapore were due to Singapore’s employment policies, rather than the lack of a minimum wage per se. By importing many low-skilled and semi-skilled workers from the region, we have kept the wages low in many sectors of our economy. Though Prof Koh emphasised that he did not agree with the government’s view on the minimum wage, he said that the government recognised that we live in an increasingly unequal society, where people at the bottom third of our social pyramid have a very hard time living in dignity. Unlike the olive that former Minister Mentor Lee Kuan Yew once said was his vision of Singapore’s society, he noted that the society currently looks more like a pear, with a very large number of people in the bottom half.

His own stance on the matter, though, was this: “Every Singaporean worker, no matter what his or her job, has a right to earn a living wage, so as to be able to live in dignity and material sufficiency.” He noted that Singapore had decided not to join the Organisation for Economic Cooperation and Development (OECD) group of countries, and did not wish to follow the OECD practice of recognising households which earn below the median income of households as poor. He acknowledged that the local government heavily subsidised education, housing, healthcare and transport, which benefit the majority of Singaporeans. “The government is allergic to the term minimum wage … which is fine, we should respect people’s allergies,” he quipped. “As long as we get the job done,” he added – that is, help low-income workers earn a living wage. 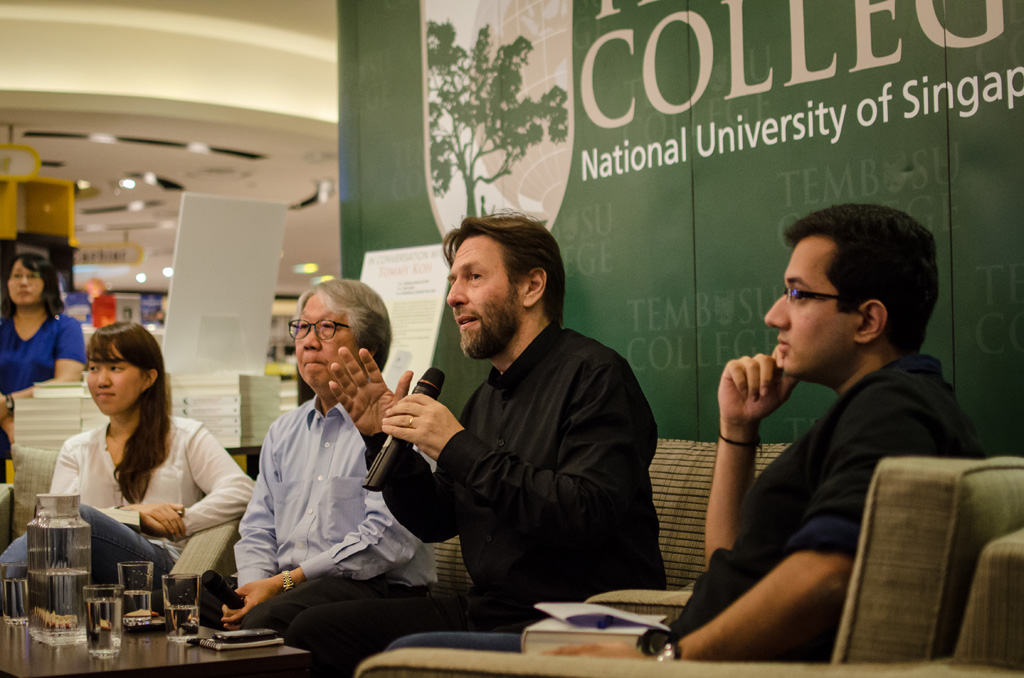 Drawing from his wealth of experience negotiating with various trade partners and government officials, Prof Koh chose one lesson to share: Negotiation is easiest when there is trust between the parties. The Free Trade Agreement (FTA) negotiation with the US took two years, and as the leader of the Singapore team, he had emphasised to his colleagues the need to create goodwill, as well as to understand the American way of thinking, their worldview, and how their government works. Personality was also a large factor, he said, citing two examples dealing with the Malaysian government where one Malaysian counterpart was friendly and the other hostile.

He strongly encouraged young people to stay in Singapore. Responding to the first question posed to him by Ms Wong—regarding how globally-mobile Singaporeans can maintain their rootedness in Singapore—he noted that Singapore’s challenges today are less economical and more political and sociological. For example, he raised the question of whether we can remain a united and harmonious society, given the growing inequality in Singapore. He praised young Singaporeans who travel overseas to study or work, but urged them to always come back to Singapore, assuring them that Singapore does have a bright future, and encouraging them to be optimistic that Singapore will always remain competitive and prosperous, as long as it continually reinvents itself. Even during the book signing session at the end of the event, he was encouraging young people to come back to Singapore. As for the economy, however, he mentioned that part of “the ASEAN dream” was for all 10 countries of Southeast Asia to become one economy, like the European Union, by 31 December 2015 – a dream which he says is very much within reach.

It was fitting that as a negotiator himself, Prof Koh wrapped up the session with a tribute to Nelson Mandela, at the request of Mr Ravi. He recalled the question he posed to Nelson Mandela at the end of his Singapore lecture in 1997, namely why he chose forgiveness after 27 years of imprisonment. President Mandela had humbly replied that he had no choice. His forgiveness was a gesture to the white community that they had a place in post-apartheid South Africa. He cited an incident from the recent movie Invictus, which showed Nelson Mandela supporting the mostly-white rugby team as a politically brilliant move to show the whites they could trust him. His only lament was that Nelson Mandela only served one term as president – too brief a period for someone who was, in Prof Koh’s words, “a miracle”. 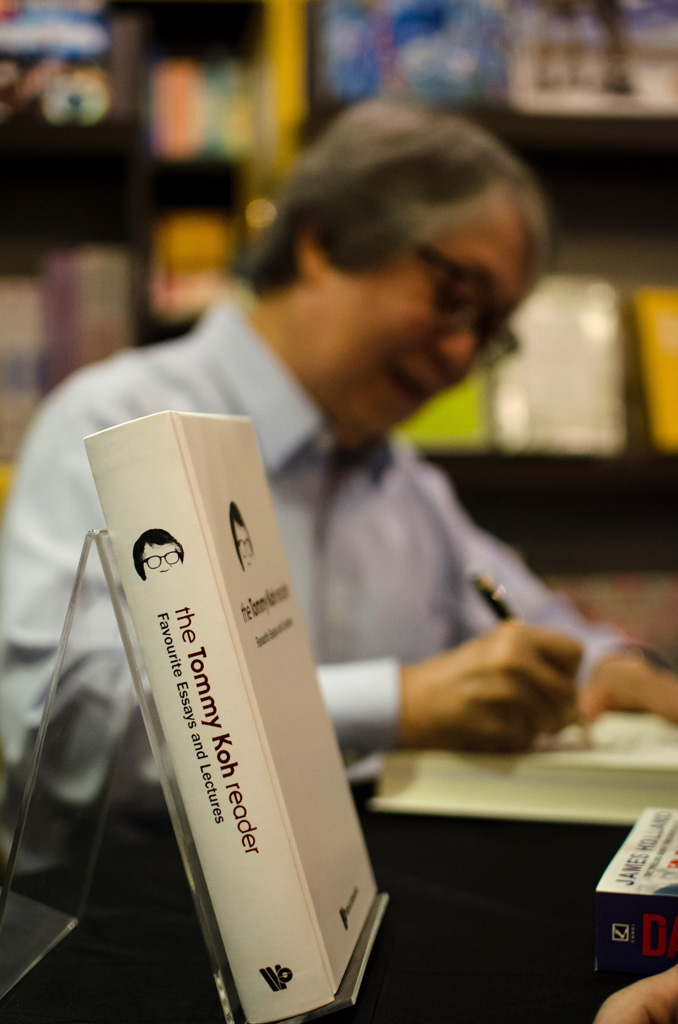 Prof Koh is usually found playing the role of negotiator, moderator, or director, but while he is comfortable presiding over large conferences and leading sizeable delegations, he becomes less enthusiastic when the spotlight is turned on him. In fact, he had to be persuaded by his publisher to allow his articles to be published in the anthology that is now on sale. Yet his bashfulness was outshone by his enthusiasm and conviction reflected in the responses he gave at the dialogue session, which is also strongly evident in the essays in his book.