Yet another soppy senior goodbye reflection piece on Treehouse? Could Treehouse have gotten staler and full of itself? Well, this might be the article for you.

To Geography or not to Geography; that was my question coming into University.

I was a pretty horrible student during my years in school uniforms. I absolutely hated studying; I knew better, but most subjects bored the hell out of me; I tried and tried to understand how logarithms work, but never quite got the hang of it. And it reflected on my scorecards: flipping through my report books, there was only once or twice when I failed less than two subjects.

The sole exception, however, was Geography. Geography was my bae; the one subject I genuinely loved studying for. There’s something unique about being able to observe what you are studying in the world around you, in person. If you don’t quite understand wave mechanics and coastal landforms, spend your next holiday at a beach daydreaming and staring at waves. If you did not quite understand the dynamics of migration, just look into your own teenage desire to emigrate and leave everything behind. No need to abstract things into mathematical equations or graphs. Equations can be understood by understanding how they manifest in the real world. I found the subject – both human and physical – beautiful in much the same way the Greeks thought Geometry was beautiful.

But nevertheless – I was still paralysed about having to choose one subject when I came into University. I do love geography – but I was not sure I wanted to dedicate my life to that one field yet.

As this sort of stories goes, there is usually an “aha” moment, followed by a resolution. That moment in this story, however, was less an epiphany and more a gradual process. Think of it like the formation of limestone. Sediments deposit themselves on the seabed over thousands and millions of years; each calcium carbonate shell of a once-alive sea creature carries with it to the sea floor the environmental and ecological conditions it lived in; the depth of each seasonal foliation or bedding plane tells us the length and intensity of that season, while the concentration of different carbon isotopes tell us whether the shell’s inhabitant photosynthesised and the age of the rock. Each new layer compresses the layers below into solid rock; if near magma or faults, the limestone may subsequently be made even stronger and denser as it turns into metamorphic rocks.

That first layer was laid during my admission interview to this college when I tried to impress by some fluffy talking about the beauty of multi-disciplinary approaches to stuff. Dr Connor cut me off and said: “I think you’ll find the alchemy of mixing subjects to be what we do here.”

The first few months after National Service was spent recovering from a particularly bad bout of anxiety. I found an internship, then went overseas alone, read, wrote, meditated, tried to make new friends, and was generally out of touch with anything about University. One of the new friends was something I vaguely knew since secondary school as someone on my Facebook, but who shared many of the same interests as I did. One of our Facebook chats, he asked me if I was planning on staying in any residential colleges: 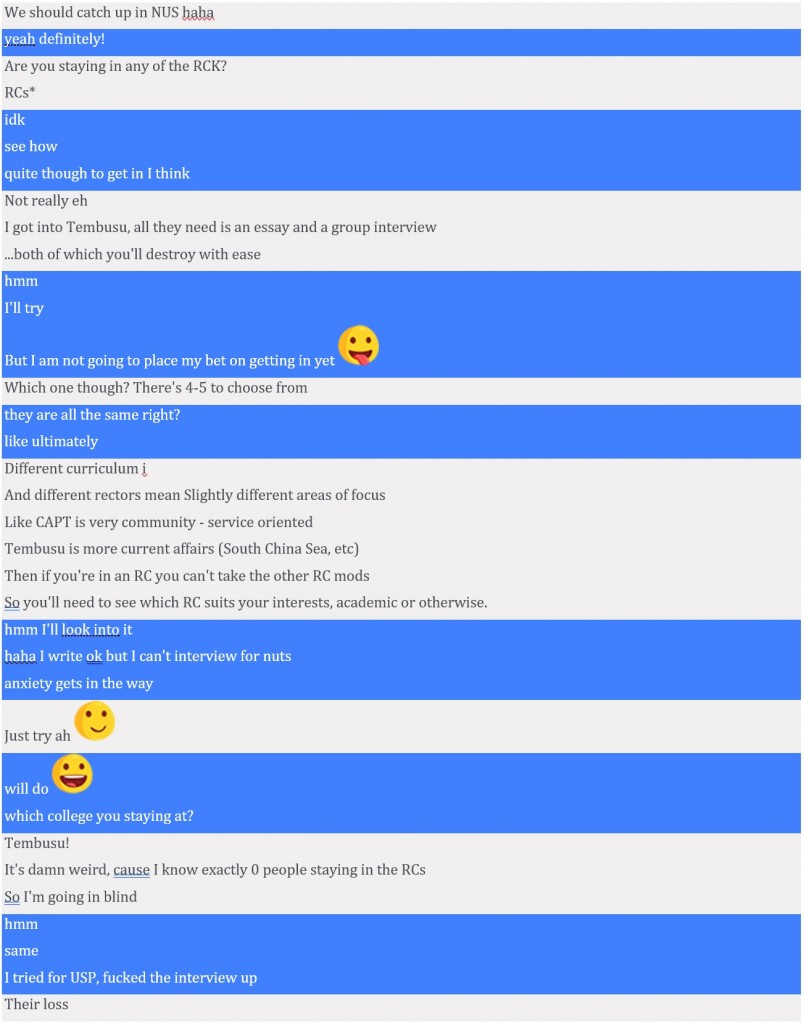 So, I applied to the Utown Residential Programme. The deadline for application was the precisely a week after I first found out about it.

I made the decision to double major in semester two of my first year in University. I was really worried about the workload, but it seemed the right thing to do.

And it felt like the right thing to do because it is so much more intellectually stimulating to undertake alchemy than to focus on one single field of study. I did choose Geography to be my primary major, but the decision was made this time on slightly different grounds: I have begun to view Geography as an intrinsically alchemistic subject. The exposure module, GE1101E, emphasised that the subject was not an empirical field but an epistemological field bound not by a subject but by a mode of thinking – that of through space and time.

I cognitively weeded what the prof said to my academic experience in this college; for all the frustration it had caused students over the years, Prof Connor’s mod “Living and Dying in the Internet Age” is Tembusu College’s most quintessentially Tembusu module. It’s an attempt to look at technology through the lenses of the sub-disciplines of the Humanities. This module has a curious distinction, I observed, whereby humanities students detest it for being too sciency, and STEM students detest it for being too artsy. But that was to be its greatest asset. It made neurons in my brain connect in ways I never knew was possible before.

Our university likes to talk big about “holistic education”, or “future ready graduates”, or “critical thinking”, or whatever new buzzwords our school’s marketing consultants have come up with. But Singaporean conceptions of University are fundamentally inseparable from technical schools; this is not a place for universal education. Not really; we are either mechanical engineers or business majors or political scientists. The overlap is nearly non-existent.

But in this college, at least, we are not categorised into the basket of our majors. We are not divided that way. There is no value in groupthink and deriding others for simply not choosing to study what we study. There is, however, endless value in learning from others, and in the bodging of concepts from different fields to solve familiar and new problems in unorthodox ways.

That is, to me, what critical meaning really means – if that overused buzzword is to have any meaning at all.

And at any rate, this is what I tell people when they ask me “So what exactly does Tembusu College teach?”

When I was younger, all I wanted to be is a computer engineer. It seemed like an engineering vocation; everyone who had descended from my paternal grandfather was vocational engineers. What I later learnt to be the computer engineering major was for a few years in my early teens, my ambition.

My academic inaptitude in Secondary Two, however, denied me the much sought after the privilege of entering a class offering “triple science” – pure Chemistry, Biology, and Physics. I was perhaps lucky; my bad grades forced me to take up Geography as a subject.

Between Einstein and Planck, I am more inclined to believe we live in a world of probabilities. Perhaps it is because my vocation is the social sciences, where the unpredictability of humans means that the thresholds for certainty and scientific significance are much lower than in the physical sciences.

And if any of the dice had rolled differently, I would not be studying Geography but a wholly different subject. If my friend had told me about Tembusu College just a week too late, my conceptions of “interdisciplinary” would be that much different.

Just think what different lessons – both the classroom and philosophical kind – we might have learnt if the dice in our lives had rolled differently.

But we are stuck with the decisions we made, and the fates allocated to us.

There are, however, ways we can alleviate that flaw in the human condition of the singular perspective. We can, for instance, do what Socrates recommended and live an examined life. But I think this dictum applies to communities as well. Looking back at the articles I wrote for Treehouse over the past two years, one common strand seems to stand out: many of them are think pieces meditating on the invisible forces which affect and shape our college.

Over the past few weeks, many retrospective farewell pieces on Treehouse also strike the same theme. Some are more prescriptive than others. I do think there is an important place for them in the landscape of thought in our college on two grounds.

First, a community which fails to reflect upon itself is always at the perils of stagnating; we clearly do love an intellectually vibrant college, and the easiest way we can do that is if we build on each other’s reflections and theories. All communities require a level of engineering; but before we can conduct interventions, we first need to have a working understanding of the problem. What I am suggesting, perhaps, is neither an art nor a science, and not just about creativity or inter-disciplinaries, but a philosophy to our college life.

It’s perhaps understandable that you think what I have just said was artsy-fartsy. And this essay was, to be fair, written after I read some trippy-as-hell stream-of-consciousness literature. I don’t have any concrete prescriptions; Yang Long’s proposal for a radically different Tembusu could be a place to start.

I would just like to say – it has been a pleasure thinking together with you guys both in and outside class over the last few years. I hope to have the opportunity to do so again; I have become so habituated to it that I am not entirely sure what University is without a residential college.

Be kind to one another,

While not buried under books, you will find Reuben digging the depths of Wikipedia and Reddit for the most obscure of trivia facts. He would like for you to know that his major, Geography, is not only about rocks.