“How are you today?”

And so, there begins the first of the English lessons we would be teaching in the 2 precious weeks we had in Siem Reap at the Journey of Grace Academy (JOGA). The tiny classroom felt hot and crammed with the addition of our team of 13 Tembusu students. But that didn’t seem to matter to the kids who eyed us with curiosity, some feeling shy by the presence of strangers while others simply excited by the new company.

~ The Journey of Grace Academy ~

Started by our Tembusu College Alumni, Winson Lim, JOGA’s mission is to boost English Language proficiency among the children in Cambodia, who would then be better able to secure higher-paying jobs later on, particularly in Siem Reap’s burgeoning hospitality and tourism sector. Since 2014, JOGA has been providing free English classes for children everyday, except Saturdays. Currently, there are 3 levels of courses for students to complete. Twice a year, a formal English assessment is conducted to consolidate their learning and determine their readiness to progress to a more advanced class.

Prior to our trip, the tCambodia team organised a variety of fund-raising activities. This included the Tembusu Vertical Marathon in January and a Supper Night, for which we cooked and sold finger food to Tembusu College residents. We met weekly to discuss lesson plans, and to prepare materials and the test papers. We also researched on potential NGOs we could try to partner with in Siem Reap and exercised our creativity coming up with fun, meaningful activities that we could conduct for the students.

Aside from a few in the team, the majority of us had never been to Cambodia. With no prior Overseas Community Involvement Project (OCIP) experience to base my expectations on, I had many questions. Were our preparations sufficient? Would I be able to build rapport with the students although I could barely speak Khmer? Would we be able to make any real difference to the childrens’ lives in just 2 weeks? Nonetheless, with open-minds and willing hearts, we embarked for Cambodia.

~ The Classroom and the Children of JOGA~ 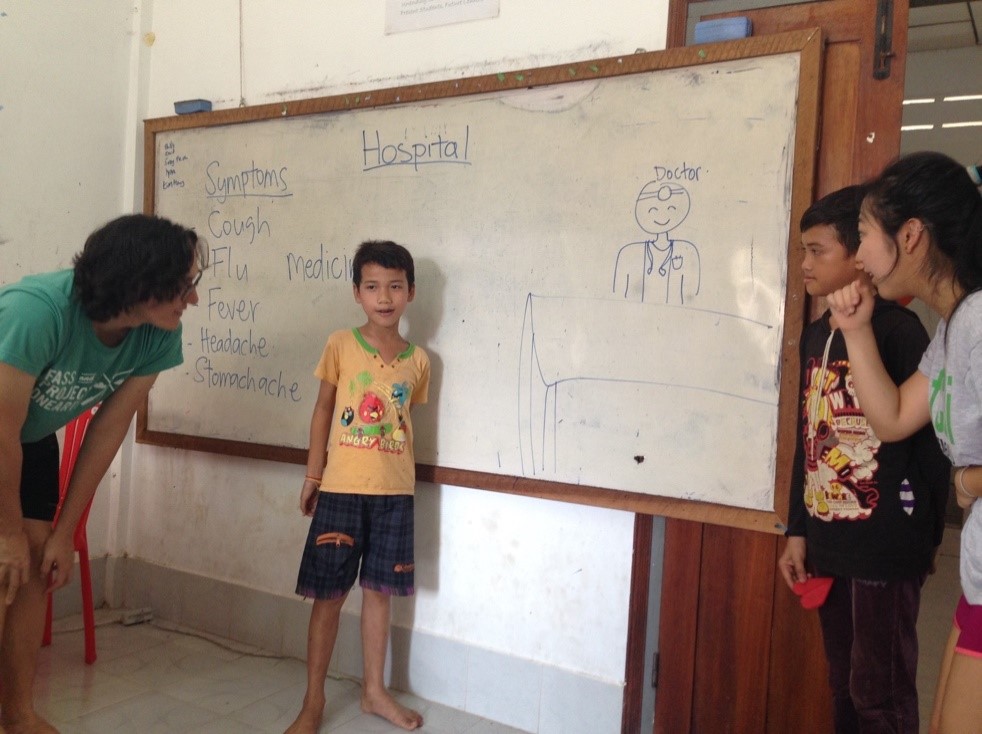 The children of JOGA are very young. Some are more playful, some are quieter, but they are all bright and eager to learn. Our youngest student, Vishna, is only 3 years old and has yet to speak any English words. When another tCambodia member, Zen, was teaching him to write the Alphabet on the whiteboard, little Vishna would take the marker, squealing in delight whenever he completed writing ‘A’, ‘B’ and so on. There’s also Sasa, an adorable 5-year-old girl who barely reaches half my height. She has to sit on a stack of 2 chairs to write comfortably on the table, but this doesn’t stop her from earnestly copying down notes from the whiteboard. Satkana, also 5 years old, recently joined JOGA and English is still very new to her. Shy and soft-spoken, she prefers not to join her classmates playing outside. So, during one break, I tried to read to her a short story to teach her to count to 10. She would listen, then habitually repeat after every sentence spoken to her. When we completed the book, to my surprise, she grabbed another one from the class library and brought it back to her seat. As for the older students, it was heartening to learn that many continued to attend JOGA regularly since 2014 and have achieved a good grasp of basic English. As the days passed, we also learnt more about each student. For example, David, who attends both Level 1(to help his younger friends) and Level 3 classes, loves drawing. 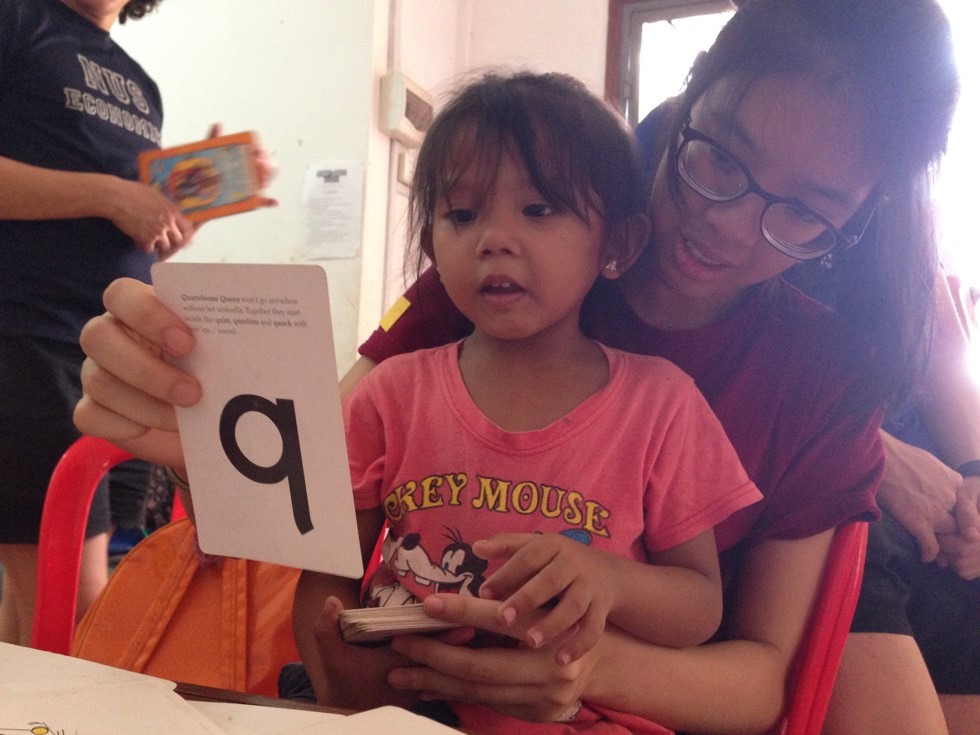 5-year old Sasa revises the alphabets with one of our volunteers.

Before long, we had our last lessons with the children. We conducted the mid-year assessments for Level 1 and Level 2 students, comprising of Reading, Speaking, Listening and Writing components. After the assessments were done, we were happy to take a break from studying; we played games and the children also sang and danced along to the MVs of their favorite Cambodian pop songs.

Instead of a traditional paper assessment, we planned an interactive simulation game for the Level 3 students which would put their English conversational skills into practice. Thus, that Sunday afternoon, tCambodia members acted as doctors, butchers, fruits and vegetable sellers, shopkeepers etc. while each student was given a list of items they had to get from respective ‘shops’.  They had fun collecting star stickers for completing each station and were treated with a bunch of stationery to take home.

Besides JOGA, we also volunteered at Touch-A-Life, a soup kitchen situated just beside our school. The dedication of the local volunteers I met there were admirable. At least thrice a week and starting as early as 6am, they tirelessly prepare free and nutritious lunches not only for the school-going children in the vicinity but also distribute them to many poor families living in the rural villages of Siem Reap.

During the trip, one of the weekdays coincided with a Public Holiday. As JOGA would be closed, we decided to spend the day at Eli International School nearby which had requested our help to organize some enrichment activities. We conducted a dancing class, origami class, Captains Ball game, and even painted a colourful wall mural together to brighten up the entrance to the school.

To explore more avenues of community service, some of us also ventured out to visit other NGO schools. This included Journeys Within Our Community (JWOC) and a village preschool started by a Christian charity that teaches English for free to the village children who are unable to afford pre-school education. 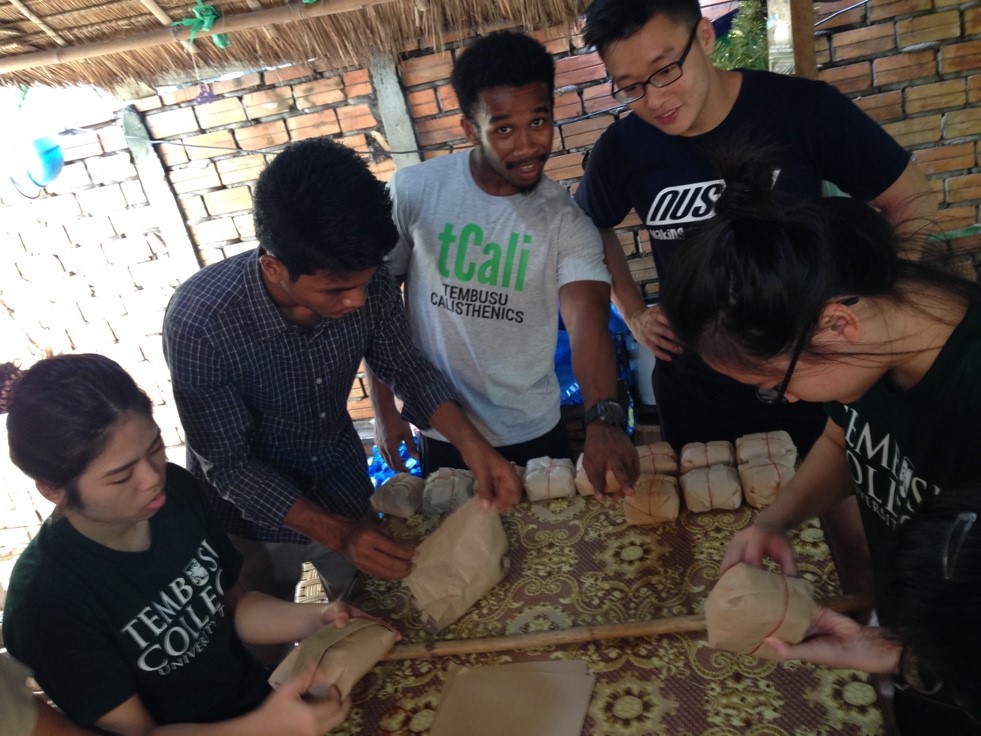 The tCambodia team spent a busy Saturday at Touch-A-Life, preparing ingredients and packing more than 600 packets of rice and soup.

Cambodia is still very much a developing country. While dealing with the remnants of decades of war, famine, and flooding, the public sector still struggles with challenges of providing adequate jobs, healthcare, safety, housing and access to quality education, especially for its burgeoning school age population. Thus, a wave of international and home-grown NGOs have come in to provide key services and development programs. As a result, there has emerged a thriving voluntourism industry in Cambodia. Amidst much debate about whether ‘voluntouring’ does more good than harm on the local community, I have also pondered on the real impact of tCambodia’s charitable efforts. I believe the influx of ‘voluntourists’ to Cambodia can be beneficial as volunteers have indeed contributed to much-needed manpower, finances and expertise. However, efforts should never be just ‘for show’. Crucially, it should be sustainable and empower locals to learn valuable skills. The best NGOs I visited are highly-organized and actively involve the local community not just as beneficiaries, but also grant them certain ownership over the projects.  On this note, what I like about JOGA is its commitment to sustainability. While more time and resources are needed to develop JOGA further, I am confident its educational programme will benefit the kids in the long-term.

The 15 days flew past quickly. On our last day at JOGA, we threw a Children’s Day party. There were ball games, laughter, dancing, piggybacking, a goody-bag for every student to take home.

I have also learnt a lot from them – these kids who do not cry when they fall, who can have genuine fun without mobile phones or expensive toys, who will walk through ankle-deep muddy roads to come for class on rainy days. When my limited Khmer vocabulary or their basic command of English posed a language barrier, we communicated through affectionate universal languages – smiles, hugs, high-fives and laughter. 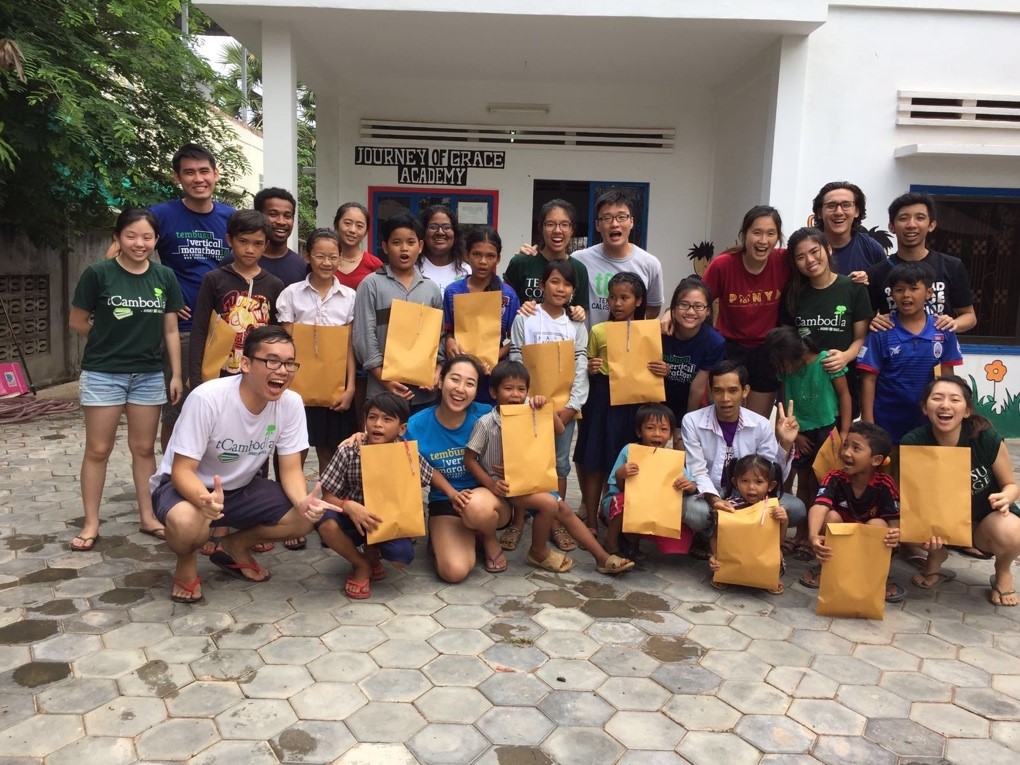 Finally, it was time to leave. As usual, we stood behind our desks to say goodbye.

“Thank you children and see you tomorrow!”, cried Teacher Liat.

We watched them as they mounted their bikes and cycled away into a tiny speck in the distance.