Earlier in the semester, a Fellow’s Tea with film director Tan Pin Pin, hosted by Dr. Margaret Tan, was held. Following the screening of Tan Pin Pin’s film, To Singapore, with Love, Mary Ann Lim attempts to deconstruct the concept of national identity posited by the film. By drawing out the language of love used to articulate a longing for Singapore, the film goes beyond its veneer of political agendas (accentuated by its censorship by the MDA) and expresses what it really means to be Singaporean. 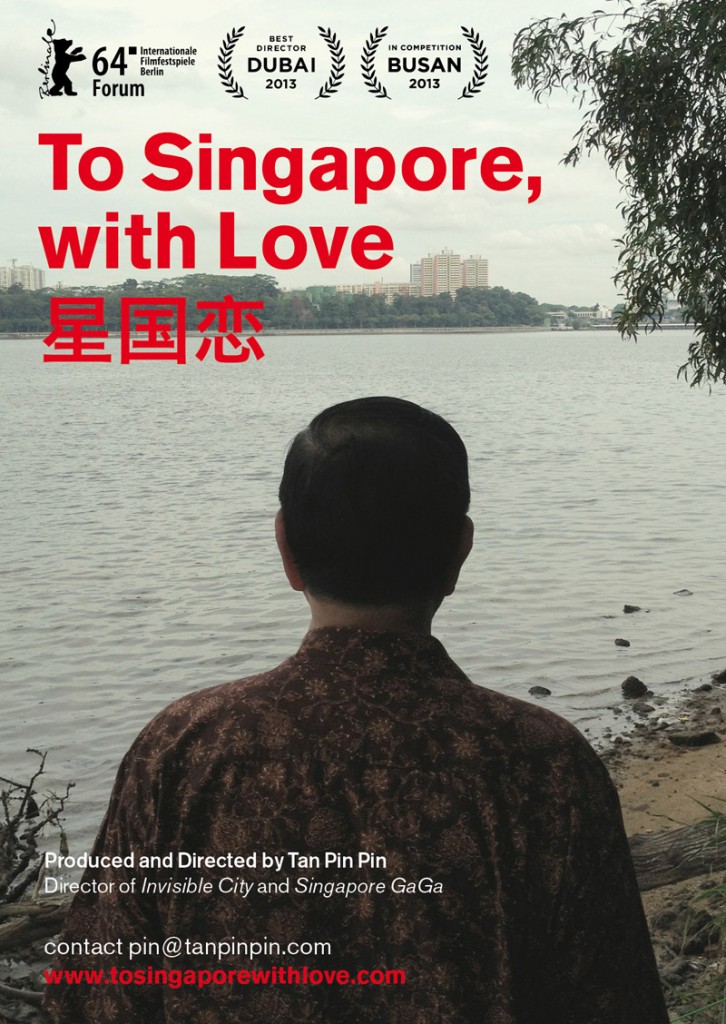 “Fifteenth of February” by the late Francis Khoo. (Audio source)

A scene of a distinguishably London house opens To Singapore With Love, before revealing its inhabitants; consisting of a woman and two young children engaged in play-time and to a man frying kway teow with prawns. Not immediately recognizable and a little gaunt, the man is Ho Juan Thai who is a former member of the Worker’s Party. He was accused of playing up racially sensitive issues concerning the Chinese language in order to incite social unrest during the 1977 elections. Currently, he resides in London as a political exile, evading possible detention without trial under the Internal Security Act. As he chirps, the point is “not to feel defeated…(so)…cook your own food”.

Ho Juan Thai is only one of the many political exiles interviewed in Tan Pin Pin’s documentary film, which includes the likes of Dr Ang Swee Chai who is the late wife of Francis Khoo, Tan Wah Piow, and Chan Sun Wing, alongside other Malaysian Communist Party members and many other prominent figures that emerged during this episode of post-independence history that was a time for both economic development and socio-political chaos. These issues remain highly sensitive to this day. Tan Pin Pin, however, offers a courageous and refreshing point of view that finds itself not rooted in internal political dialectic but in an examination of the human condition within the Singaporean context.

“O my people, my homeland”

To “be in exile” denotes a state in which one is being barred from one’s native country. Taken a bit further, it describes an implicit forceful, physical absence that goes against one’s own will. Typically, what one would associate with the term “political dissident” would be the image of a dissatisfied, slightly manic rebel, projecting an image of anti-establishment that accentuates the rebel’s political defiance expressed further in a slew of obscenities and outraged passion. In other words, the face of Amos Yee.

The scandal surrounding the contemporary dissident finds roots in the provocative presentations of the exiles within media:

The film, however, goes beyond the controversy to understand something more fundamental to political constructs and more specifically, national identity constructs. In an age where dissidents herald criticisms that rely on crude words, cacophony that masks its emptiness and a disposition that tends towards resentment, Tan Pin Pin successfully illuminates the calmness of the subjects within a film that was never meant to promulgate any hidden political agenda. Two luggage bags taken on the journey from Singapore to London in exile, as symbols of sentimentality and in the hopes that one day they will be taken back, the image of Wah Piow is instantly shifted from Marxist rebel to an ordinary man with beliefs, continuously dreaming for Singapore. Herein lies the crux: it seems as though the love for one’s nation is independent of political agendas and physical distance. And it is within the setting of the home that Tan Pin Pin successfully strips the dissident of any socio-political context they were once engaged in, to reveal the underlying substance: a human being with beliefs that he or she fights for, and a fundamentally normal life sprinkled with fried kway teow, old trinkets, and familial love that goes beyond the boundaries of the forced, physical absence that begets exile. This coerced distance from home intertwined with a new contrived home built in foreign land, articulates the tension that comes with clinging on to the last means of remaining Singaporean, but also attempts to leave open the doorway that holds the promises of returning someday.

“the ones that I love / I will never see you again”

How does one find comfort in displacement and loss? As Dr Ang Swee Chai shares, “making a stand is expensive”. Reunions are often met with geographical divisions, the mortal need to seek human comfort and intimacy circumvented until further notice, when the circumstances are less precarious and the longing for home dismissed on grounds of “self-exile”. The life of a failed revolutionary itself dwells in liminality, a trajectory of what never happened. The official narratives within the Singapore history are many that have been expounded upon time and again in educational readings, state propaganda and biographical accounts sanctioned by the state.  The linearity of such narratives that concludes with our present day circumstances of a “clean, green city” sanitized from words to landscape and the envy of many is one that rejects all other possibilities, simply because it is and was necessarily so in both past and present contexts to move forward as those in power thought it best. But we are left then, in this new phase after 50 years of learning, growing, evolving, to work with what we have and proceed accordingly as a nation. Those that have been displaced do so likewise, but simultaneously merely gaze from afar at a country’s present that has progressed without them.

Perhaps it is the pain of separation and rejection that also propels the exiles forward: “it is a love that prevails…but humans are all the same wherever you go.” Dr Ang, who followed her husband into exile to London, recounts her first experiences in London, faced with uncertainty and strangeness. For her, she found common ground in her liminality and expulsion with the other refugees. The other exiles have also settled comfortably in their foreign lands, some still immersing themselves in their initial work, political or otherwise, and others, carving out new paths for themselves, for instance, setting up a noodle-making factory in Thailand. By living in relation with others beyond the boundaries of one’s own understanding and experiences, our contingency manages to probe into our sense of individuality and identity and exposes its common global singularity often ignored in national identity discourse.

“till the storm clouds gather / at break of the dawn”

In all fairness, Singapore tries its best to forge a strong national identity that is crucial for its progress and social cohesion. The Ministry of Culture, Community and Youth (MCCY) statement addresses this succinctly:

“A strong national identity builds a sense of belonging among Singaporeans. We strive to nurture a gracious and resilient nation, whose people remain rooted and loyal to Singapore in the face of globalisation and in times of crises.” [3]

Arguably, government initiatives to nurture patriotism and a sense of belonging amongst its people appear ineffective in the face of its being rooted in individual responses towards the nation, rather than something which can be solved through a blanket approach. The recent SG50 celebrations themselves hint towards a contrived culture built from the foundations of consumerist motivations (50% off for selected items to SG50 inspired sushi) and prevailing symbols (Singapore Girl, Marina Bay Sands, Ah Boys to Men). National identity is thus construed through a multi-faceted means that exists only insofar that the symbols remain constant and reflect the current predicament of the country. The love for one’s country seems to take on entirely new implications however, that are not reflected merely in the moving equilibrium of hegemony that adopts various symbols or icons over time. [4] While symbols are important to the memories that fuel the sentiments that one has towards home, this love delves deeper into such sentimental values and is borne from the individual’s struggles of enduring passion. It is rooted in the individual’s strong sense of commitment to the endeavours arising from his or her beliefs that go beyond ugly political polemics. If this is home truly, then its people are the family one would go great lengths to protect and stand up for. It is with this understanding that the exiles remain so deeply fixated on Singapore and its future.

“and bunga raya shall bloom in the rain” [5]

The film is thus not a call to raise arms against a system that is still filtered by courtesy campaigns, film censorships and the Internal Security Act, but that nevertheless has achieved its goals to nurture a gracious and resilient nation rather successfully. It is not a call either to oppose all government policies or propagate the stances taken by the exiles in a context that was so much more dysfunctional and susceptible than what we know now. It is a love letter addressed to us as Singaporeans from those who have known the pains undergone in nation-building and in attempting to claim a portion of Singapore’s future for themselves. As such, the film allows us to acknowledge the gaps within Singapore history that begets a further exploration of how we have arrived to our current state. In retrospect, how would life have changed for us if the political exiles had succeeded in their various causes 30-50 years ago? We might have learnt a bit more of what it means to really fight for a cause and for a country, and in doing so, understand the pains of love and sacrifice that finds its own unique place within the complexities of the world.

Moving forward, how should we then, as Singaporeans, attach love to a country that has been so far removed from its formative years but, at the same time, is in a state of constant flux through its current progression? Perhaps the answer is simply learning to have the courage to claim for ourselves Singapore, with love.

About the Author
Mary Ann shares an unrequited passionate relationship with classical music, art and philosophy, the three things that give her reason to live as well as reason against it. Her parents don’t really understand her and think she’s too artsy-fartsy for her own good. To their relief, she occasionally takes a break from all that jazz to spend time doing her work.