Formula 1 is notorious for being the most expensive sport on the face of this planet. In 2014 alone, the Ferrari team had an operating budget of $410 million. For a sport that many see as the pinnacle of engineering technology, one would expect a mad scramble for the finish line, with teams doing whatever it takes to win races. Despite this, F1 has a surprising number of arcane rules that prevent such a no-holds-barred technological arms race.

Formula in F1 refers to a set of rules that dictates performance characteristics and parameters in the race cars. The International Automobile Federation (FIA) serves as arbiters for F1 standards, but also has other racing series, such as Formula 2, Formula 3 and down – all classes having their own set of governing formulas to dictate performance parameters. Every component of a competing race car must conform to a strict set of specifications. This includes guidelines for wheel dimensions, brake and suspension systems, chassis height, onboard electronics, and so on. The rules are revised on a yearly basis to keep all competitors on their toes, and prevent a single team from gaining dominance for too long. Changes are also made from time to time to reduce the cost of racing in F1, as escalating expenses have led to teams quitting the sport in the past. 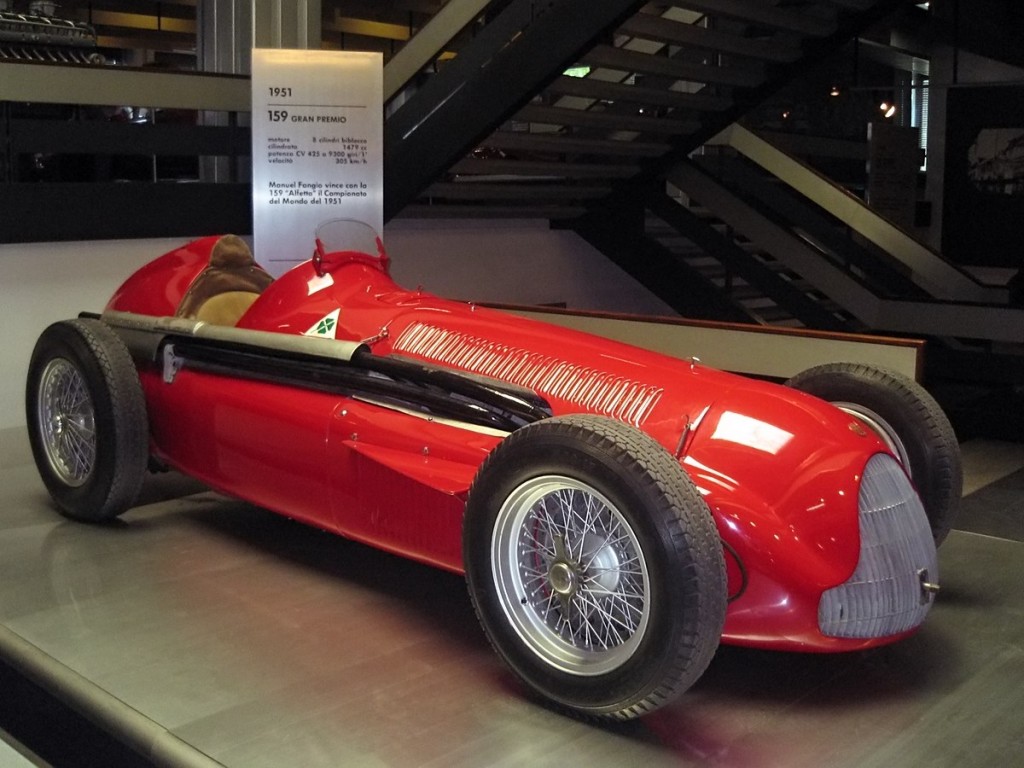 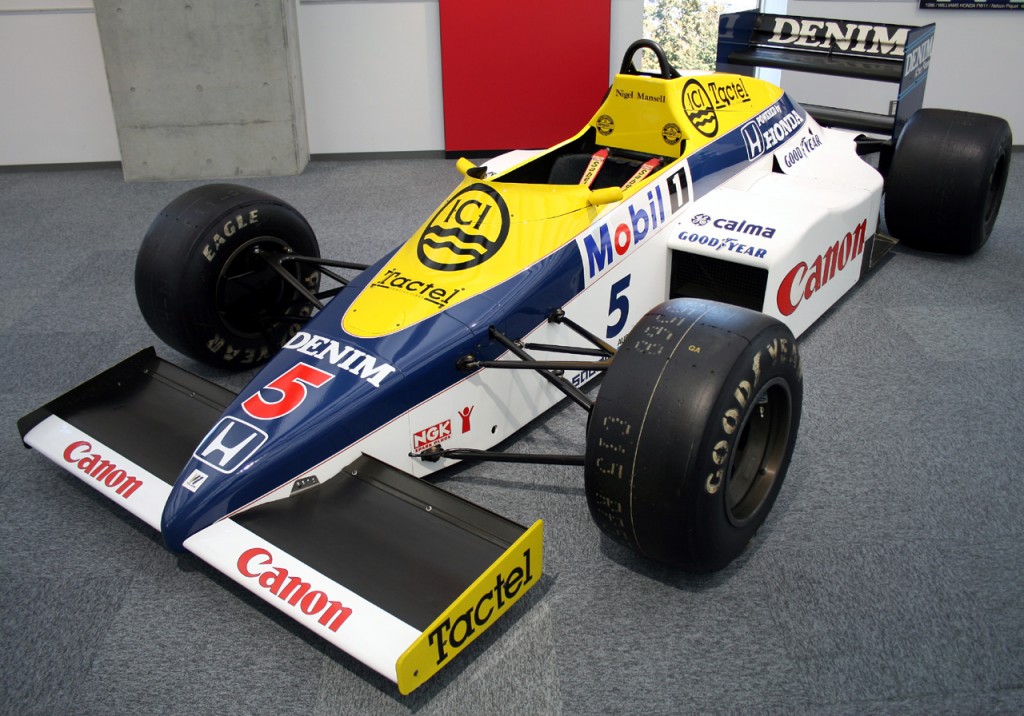 F1 car from 1985. The advancements in the understanding of fluid mechanics and aerodynamics are clearly seen in the leap in F1 car designs from the preceding era. (Image source)

One example where the fastidious nature of F1 shows through is in the area of aerodynamics. F1 cars are designed to create downforce while minimising drag, and these considerations give them their distinctive shape. In essence, the cars work like upside-down aeroplanes. Instead of pushing air downwards to lift themselves up, they direct air upwards to push themselves against the ground. This allows them to better grip the racetrack, and thus achieve higher speeds. In the 1990s, F1 cars sported many winglets and extensions sticking out of their fuselages, to help them slice through the air better as well as to channel moving air through the massive wing at the back to keep downforce high. Today, there are very precise rules for winglets and extensions that prohibit car designers from coming up with such outrageous designs. Nevertheless, designers continue to devise new ways to obtain the same drag force while within the boundaries of the rules. To circumnavigate restrictions on winglets, the designers came up with radically curved bodies to shape and channel air flow and ‘cheat the wind’ (in industry speak). 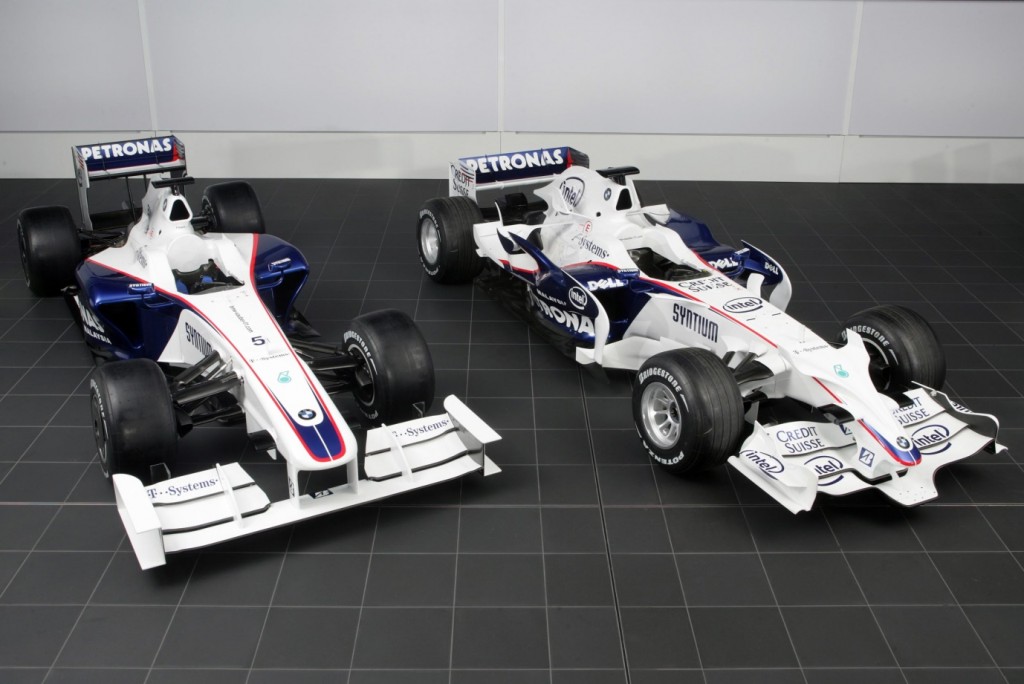 The cars used by BMW Sauber in 2009 (left) and 2008 (right). Note that despite being designed only a year apart, there are many differences that reflect the changes in FIA regulations. (Image source)

The evolution of car designs can be attributed to these formulas and rules that shape the way designers approach the problem of speed. Though car designs from different manufacturers often bear similarities over any given season, crucial differences between set ups and designs do exist, and thus make all the difference between victory and defeat.

Engine development is also heavily regulated by the governing body. Engine performance is generally correlated to engine displacement, which is the total volume of all pistons within a given engine; the larger the displacement, the more powerful an engine can be.

Cross section of an engine cylinder. The engine displacement is the sum of the volumes of the cylinders in the engine. (Image source)

Currently, the engine displacement of all F1 cars is capped at 1.6L, similar to the Toyota Vios and Honda Civics that ply our roads. How, then, are manufacturers able to come up with so much power from such a small engine? The answer lies in a combination of engineering genius and innovation — unique manufacturing techniques, tweaking engine revolution speeds and optimising fuel injection controls. Considering that F1 engines were once 6L monstrosities, the move to smaller displacement engines is a sign of a sport keeping with the times, reducing engine emissions and having more fuel efficient vehicles while still delivering on the need for speed. Limiting engine size forces manufacturers to work and innovate within boundaries rather than taking a ‘bigger is always better’ approach. Many of the design advancements in smaller engine designs are thought to trickle down to consumer cars as well, as evident from the widespread use of electronic fuel injection and consequently the excellent fuel economy in modern cars compared to those of a generation ago.

In reality, F1 does not actually push the boundaries of technology. Instead, it takes existing technologies and pushes them to limits never before seen in commercial applications. The Kinetic Energy Recovery System (KERS) was introduced to F1 in 2009, allowing a driver to store energy when braking and release it through the use of a special gearbox and drive shaft. The mandatory introduction of KERS for a few seasons drove the meteoric improvement to such energy saving systems and today we see variants of KERS deployed on our luxury vehicles, further boosting fuel economy. 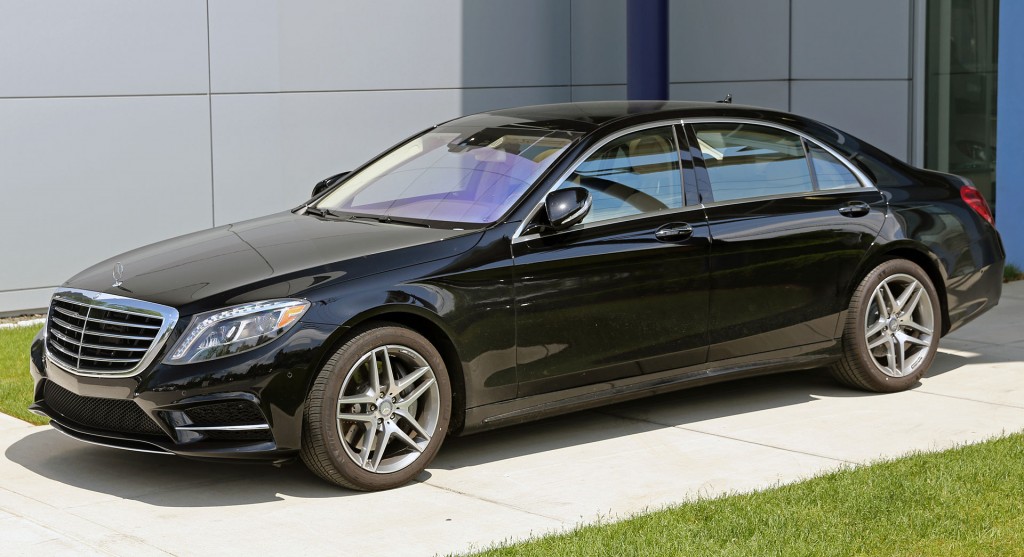 The Mercedes S-class, flagship of the Mercedes-Benz line up. The S-class boast many advancements in technologies like automatic computer gear shifting, traction control, a variant of KERS, and even disc brakes among many others, that were first introduced into Formula 1. (Image source)

To a casual spectator, the sleek machinery and breakneck speeds of F1 may seem like a world away from the unremarkable image of the wider automobile industry, but rules within the sport mean that the two are not as dissimilar as they initially appear. F1’s self-imposed limitations and restrictions serve to encourage innovation and creativity in meeting design challenges, and improving performance. Many of the advancements first pioneered by the sport have since found their way the cars that we drive, and these tangible applications of technology ensure that F1 continues to remain relevant today.

About the Author
Zhimin is a third year Mechanical Engineering student who finds reason to be curious about other disciplines. He is an amateur triathlete, divemaster and a paratrooper. An avid adventure-seeker, he never backs down from a challenge and enjoys pushing the boundaries of the human condition.