The University Town Intercollegiate Provost’s Challenge Shield Debate Tournament, UTIPCSDT for short will be happening next Tuesday on 27th January, with the subsequent round being held every Tuesday over the next few weeks, Tembusu will be looking to reclaim the Shield that Yale-NUS won the previous year. I sat in during one of the practice sessions to witness the strength of our teams this year.

Taking the center stage, Samuel Lim delivered his case in his unique rapid fire style, establishing the context of the debate, elucidating reasoning and rationale. The topic of debate was ‘This house will rescind the nobel peace prize for Malala Yousafzai’, and Samuel showed no mercy as he painted her as a picture of the bane of feminism, being a false symbol lauded by the west but contested and controversial in her homelands, causing more war than peace.

The nature of the topic was one geo-political in nature (one of the hardest to debate) with splashes of feminism as the areas of contention. Representing Tembusu team A was Samuel Lim as the opening speaker, Clara Lim as Deputy and Stephanie Wong as the Whip speaker. Being a practice session for the upcoming UTIPCSDT, their opponents were Tembusu team B, with previous president of the Tembusu debate society Tan Yan Wei as the opening speaker, Lee Juin Bin as Deputy and Benjamin “Jerome” Ng on Whip.

‘POI sir!’ offered Benjamin as he stood up, seeking to challenge some of the assumptions and clarify certain terms in a manner that would be advantageous to his team’s case. A wave of the hand from Samuel motioned him to sit down, identifying that it would be poor timing to interrupt his own substantive now to take Benjamin’s point. After rounding up the opening portions of his speech, Samuel offered his opposition a chance for POIs, which Yan Wei quickly took up and asked for a clarification on his portrayal of Western values. 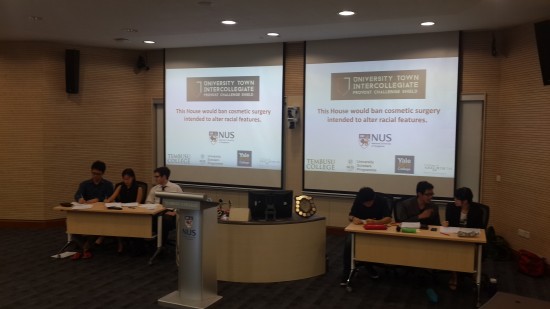 Unlike a free flowing argument where interruptions are common and unorganized, debate follows a structure in which each speaker is given seven minutes to deliver their case and supporting reasoning, known as substantives. However, like any good exchange of ideas should, there is room for interaction between teams through the form of POIs, short for Point of Information, to raise questions and engage with contentious ideas or terms that their opponents have brought up.

Quick on his feet to respond and even faster with his words, Samuel tapped upon his encyclopedia-esque library of knowledge to address the point brought up, moving on to develop his second substantive before rounding off nicely at the seven minute mark. The case for the motion had been made and it was opposition’s turn to make theirs. Yan Wei opened up strong, what he lacked in raw speaking speed he made up with structure, clearly identifying what was going to be addressed and explained upon in the opening of his speech, moving on to refute the assertions and claims of Samuel which questioning his assumptions in an attempt to undermine the strength of his opponent’s arguments and making a few of them look silly in the light he had shed on the arguments. He then moved on to develop his own case, painting a different picture of Malala that seemed more compelling as a parallel with Martin Luther King.

While debate might not have the physical aspect or the embodiment that sports do, the excitement and atmosphere in the room is electric. The swings in momentum as the debaters argued their cases and contested ideas and values can be perceived and sitting in the room as a spectator, it was exhilarating to watch.

The next two speakers delivered their speeches in similar fashion, bringing up rebuttals to their opponents claims and then developing their own case through their substantives. However, when Stephanie took her turn, the debate took a huge swing in her teams favor. Examining the overall context of the argument and then comparing it with the claims of her opponents, she quickly asserted that they had made weak arguments as they were simply perceived notions without tangible results that could be measurable. The specifics of their arguments were further broken down by her as she dissected through the cores of certain assumptions that were made and reinforced her team’s arguments with the now weak looking claims that were made by the other team.

Critical analysis, good general knowledge and sharp wit are some traits that good debaters have. While the lead and deputy speakers usually prepare their speeches during the preparation time, the whip speaker often goes in to a debate with a blank sheet of paper, spending time to analyze and deconstruct the arguments that were made. Often, the whip decides the outcome of the debate and it is a role that takes great skill and practice to achieve; the results of a good speech from the Whip position are very apparent.

By the time Benjamin moved forward to deliver his speech, his claims and arguments came across as empty rhetoric due to the fantastic job Stephanie had done, completely blowing the opposition team out of the water.
While Tembusu team A managed to secure victory in this practice round, the prospects of both teams are definitely looking promising as they head into the tournament proper itself. With an all Tembusu finals being the desired outcome, our debaters will be wanting your support as they do verbal battle with the other colleges.