Johandy Tantra was born and raised in the second-largest city in the archipelago of Indonesia: Surabaya. Of Chinese descent, he schooled at the typical (unofficial) segregated schooling system in Indonesia, while most of the Chinese enrolled in private schools.

It was only when he was 16 did he settle in Singapore. Anglo-Chinese School (ACS) went to his school in Indonesia to give a talk and open applications for full scholarships, which he qualified for after taking multiple tests and an interview. Admitted into the program, he spent 4 years in ACS from Year 3 through to Year 6, lived in the boarding school and eventually went on to score the full 45 points for the International Baccalaureate. He attributes the relationships forged in boarding school and the lessons learnt from his time with the Scouts as key to helping him over the years. 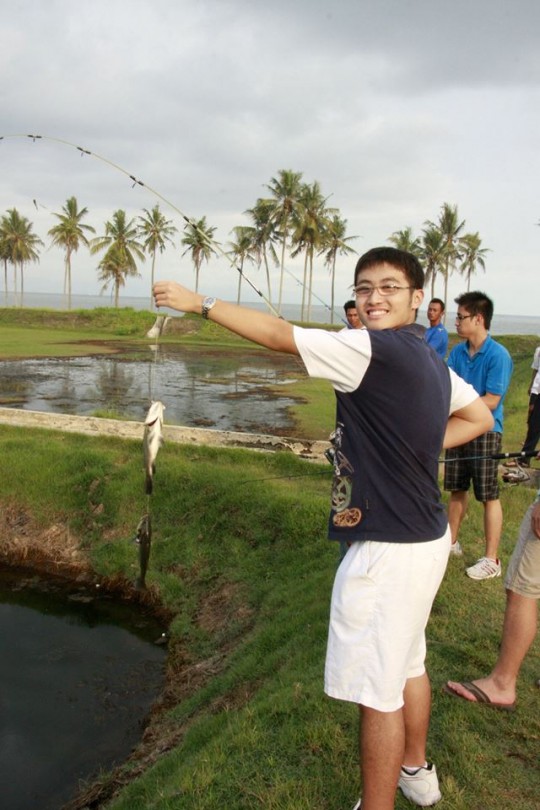 Here, we see Johandy being exceptionally pleased with himself upon catching a fish…

Over lunch at TechnoEdge, Johandy recounts some of his amusing, memorable (and perhaps embarassing) life events to Alison.

In the boarding school, supper was a daily activity. On a particular day, which also happened to be Johandy’s birthday, the boys decided to talk a walk after supper. Contentedly walking along the tracks, Johandy’s peaceful reverie was broken by the assault of a raw egg.

Then, more eggs. And chilli sauce. And soy sauce.

By the time Johandy realised it was an I-love-you-that’s-why-I’m-throwing-eggs-at-you birthday celebration, he had the whole gang throwing seasoning at him. It was, quite literally, the dirtiest birthday he could remember.

We are certainly not doubting the strength of the boys’ friendship, as Johandy recounts a similar birthday prank just earlier this year. His friends dragged him to what is commonly known as the ‘smokers’ corner’ behind the Tembusu building, stripped off his shirt, lathered (lovingly, we would assume) him with all kinds of over-the-counter balms and creams, and poured a bucketful of iced water over his head.

What a way to celebrate one’s 21st birthday.

“I think I like Princess Anna from Frozen, because her struggles are meaningful. Unlike the other princesses who are concerned with kingdoms and boys, Anna mainly fights for her sister- her family.”

“The first Disney villain that comes to mind is Pete from Mickey Mouse, I like him because he makes me laugh. Just like the sidekicks Timon and Pumbaa from The Lion King. I appreciate comical characters.”

“I like the red Powerpuff Girl,” (unmistakably Blossom, for those who follow the series), “because she’s always the rational one who mediates all arguments.” I wouldn’t expect less from an engineering student, really. 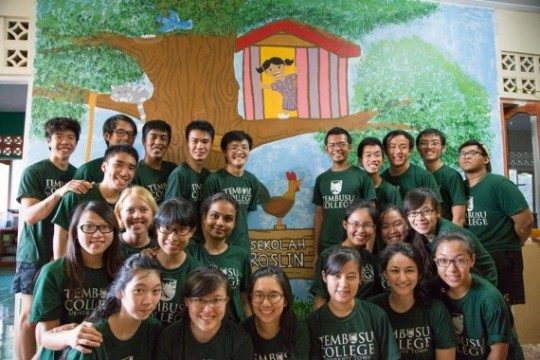 Now a student reading Mechanical Engineering,  Johandy tells Zhi Min that he finds much interest in finding out about how things work. The two things he is keen to dabble in during his time here in NUS are technology and applied processes in the food industry . In fact, last year’s Innoventure competition saw Johandy working with his team from Tembusu to tackle Nestle’s problem statement on finding alternative nutrition sources in easy-to-consume forms.

Johandy is very keen on entrepreneurship, envisioning himself returning back to Indonesia at the completion of his scholarship bond to start social enterprises.

“There are still a lot of things about Indonesia that needs to be fixed, the education system in particular.”

Unfortunately, the Tantra Foundation is already something in existence, so perhaps the Johandy Foundation might be a more realistic name to look out for in the future!