Hands were clasped together, and bodies rocked back and forth in their seats. The sense of anticipation and excitement in the air was palpable. Hopeful after hopeful would take to the symbolic pulpit, and preach to their flock of a better future. Every moving speech would be met with triumphant applause, leaving the packed stands refreshed and hungry for the next speaker’s rabble rouser. And not a one would disappoint.

One would hardly think the above a description of the college common lounge last week, when candidates aspiring to the 5th College Students Committee (CSC) spoke of what they hoped to achieve. And one would hardly be wrong.

There was little fanfare accompanying the presentation of candidates. The entire affair was low key, perhaps to the point of being laid back. The venue was generously spacious, and seating occupied no more than half the common lounge, with pockets of empty places sporadic. Platitudes were exchanged within a crowd from whom half were those clamouring for elected office. And of the other half? The odd supporters here and there, and a handful of curious souls. And of course, such persons as myself, who came hoping (perhaps against all hope?) to see something different.

One should read this piece prefaced with the knowledge that in the fourth year of Tembusu, the fifth version of student government will come to power. It is then a worthy exercise in my opinion to reflect on the curious case of the Tembusu CSC. The Constitution reads:

To act for and represent the College, and in all matters of interest no less! Surely this cannot speak any more plainly on just how much power is – or rather, should be – vested in our CSC. Surely this allows for a worthy group of individuals to be given the mandate to lead us in all things big and small. Alas, would that it were so… but for a few points of contention.

First: there is the matter of interpreting the Constitution. It is worth noting that the “College” in that text is not the College. The term refers rather explicitly to an imaginary group of people, namely the “Tembusu College Student Association” (Section 1 of Article I), a group consisting of every student resident in the building. It is in this explicitness that the “College” as per the Constitution patently excludes every one and thing else. The fellows are not a part of this “College”. And neither are any of the administrative staff working in their homely dungeon below the MPH. In much the same way that the university union NUSSU does not represent the University in its entirety, the Tembusu CSC does not in any way completely represent Tembusu.

Second: Though the CSC should act for and represent us (student residents), and rightly so, delineating which are the matters “of interest” and which are irrelevant to our lives (as student residents) is something that has yet to happen. Who has the say in determining the jurisdiction of the CSC? And before one berates the author for unfairly implying that such a delineation is possible and more importantly doable at all, let it be said that the CSC not knowing what it can or cannot do is not the problem. The problem, as with most problems, is with the people.

What it means to govern me, and quis custodiet ipsos custodes?

Government is never a one-way street. Our CSC can only be the government for which they were intended, if we (student residents) function as intended: the governed. This relationship is by no means unique: it forms the foundation of all the social contracts invariably signed all over the world when governments come to power. Those who lord over us do so with our express permission, because in exchange we the people are able to live comfortable and safe lives. Where then is the disconnection between this paradigm, and our reality?

Each CSC has trumpeted having been given a mandate by the people (us student residents). And what should follow such mandates is the authority to enact and enforce policy. It should therefore strike anyone as rather strange, that our CSC has no authority whatsoever when it comes to their enacting and enforcing policy. This bold claim is not made lightly, and is substantiated (rather strangely, I must admit) with a hypothetical question: should a student resident (i.e. a member of the “College”) refuse to follow a particular directive from the CSC, say like mandatory attendance of a General Meeting, what recourse is there for the CSC? The answer is that there is absolutely nothing that the CSC can do about it. The reason for this is simply that there can be no compulsion between students to do anything: the CSC, by virtue of consisting completely of students, has no authority over me, another student, even though they were elected into office with a mandate that came from me.

The power of the CSC is thus meaningless unless the people agree fully to be subjected to their will; the compulsion must be voluntary. Barring that…

The only reasonable way to get around this quandary is for the CSC, in times of crisis or controversy, to appeal to authority, that is to say, the fellowship of the College or the administrative staff of the College office. And that, of course, entirely subverts the authority of the CSC themselves, because this places them beneath a hierarchy, not atop one. Back to the previous example, and this time with some specifics: the only way for the CSC to remove a drunk and stubborn resident from the MPH in the middle of the night is for them to request the assistance of OCS, the Office of Campus Security. And the OCS does not serve the CSC. Indeed, the drunk resident in this case has every right to appeal to OCS to have the CSC removed from the MPH as well!

In other words, while their mandate (requiring our subservience to them) to the CSC gives them authority over us, that we are all student residents evaporates that very same authority into meaninglessness. And the only way out is to acknowledge the subservience of the CSC to the fellowship of the college, and therefore allow them some executive privilege over other students; the reality, is that we shall remain in service to our fellows.

Which is not to imply that the fellowship is lording over all student residents a la Machiavelli. Indeed, I admit to an unprecedented level of autonomy in living his life in the college, in no small part due to the concerted will of the fellows in creating such a free environment. The question here is where this leaves our dear CSC.

Where it leaves them is the dregs of authority: the civil service. Events still need to be planned and run. Mechanisms for the flow of resources to student groups must still be operated. The printer must still be filled with paper, and the welfare pack must still be packed and distributed. There must still exist several layers of administration that will perpetuate how comfortably student residents can go through their Tembusu experience. Tembusu still requires a civil service.

And so the CSC shall remain relevant as our leadership, in so far as we think of leaders as our servants. And we do. Whenever there is a disruption to the wonderful tedium of our lives in the college, we turn to the CSC to “fix” things. Just recount how many times the welfare secretary has been sounded out for an empty printer tray. There is nothing executive in the nature of printer tray filling. It, like the many, many things the CSCs have been doing, is purely administrative. And from this comes my final claim.

If the CSC stops doing what it has been doing, what would change? Probably nothing would. For example: If the printer stops working permanently, we would be forced to print from the commons around. If there is no supper service (which has been the case for some time now), we would simply order supper in by ourselves (which has also been the case for just as long). If there was no orientation planned by students, there would be an orientation planned and run by others (case in point, this year’s camp followed by an independent orientation by the fellows). If there is no Open Day planned by students, prospective students will still get to know about Tembusu through the various other outreach initiatives by the College that pointedly require no CSC involvement. 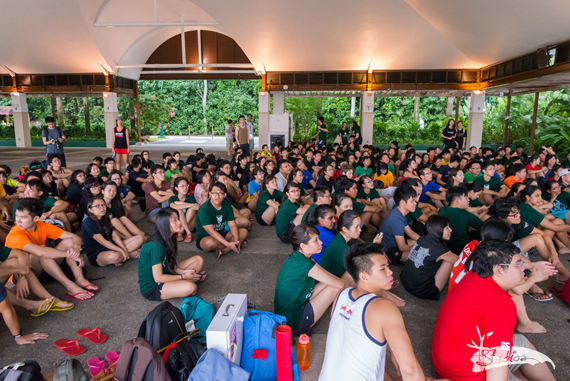 So the question asked now is this: what is the relevance of the CSC? The answer in this piece is, that the CSC shall ever be relevant in what they choose to be, and therein lies their tragedy too. Because however they decide to contribute to the College, they will never be thought of as anything more than a bureaucracy that can be lived without, by an electorate that shall remain ever blind to the sacrifices each CSC member makes just to keep us happy.

I only hope that such thankless sacrifice is reward enough for the fellow residents imminently taking office.