In recent times, Singaporeans are faced with the pressing notion of living in material sufficiency while retaining cherished values. The country is now an affluent state which is accompanied by increasing inequality and widening income gap. Central to this is the worrying idea that Singapore might be persisting on developing along economic lines of thought, potentially becoming a market society, in which the mechanisms of the market override social norms or values. Such lines of thought are referred to in this essay as ‘rationality’, which is opposed to ‘values’.

Such was the topic of discussion at the last Tembusu Forum on Mar 20, “Has Singapore become a Market Society?” It was moderated by Prof Tommy Koh who had invited two speakers: Prof Ng Yew-Kwang, Albert Winsemius Professor in the division of economics at Nanyang Technological University, and Mr Donald Low, Associate Dean at the Lee Kuan Yew school of Public Policy, National University of Singapore.

Singapore, thankfully, had not yet reached the extremes of the market – as was pointedly observed by an anecdote that in America, foreheads were being sold as advertisement spaces, and students were paid $2 for every book they read.

Both speakers favoured the market for its efficiency, effectiveness and the freedom of choice it offered. However, each speaker had different perspectives on the kind of mindsets people had in how the market can increase well-being.

One speaker raised a study of people arriving late even after a fine was imposed on late-coming. His point was that market forces overrode social obligations to arrive punctually, and bypasses intrinsic motivations for one’s actions. The fine was perceived to be a price on latecoming, which had the adverse effect of making latecomers feel entitled to their tardiness since they were paying for it. Rationality, here, has the effect of increasing well-being for the individual, albeit inconveniencing the community.

In Singapore, intrinsic motivations for certain things can be bypassed when parents receive procreation incentives (baby bonuses); people develop a tendency to judge others in terms of their “market value”, thereby producing a harsh and unforgiving society; or even the cases of high ministerial salaries can create undue expectations of ministers who are expected to “do no wrong” in government. Therefore, the intrusions of market mechanisms in society should be questioned and checked.

Yet, a different perspective was also argued: that there was a cost to punctuality as well, in the form of potential accidents and mishaps arising from situations such as speeding on the road, or jaywalking. By “paying to be late”, anxious drivers might therefore curb their speeding; therefore, the market forces do add to well-being for the community.

Another study raised in the forum shed a different light on the issue. In a scenario where an individual can either be paid some money but a rat would be killed, or be paid nothing to let the rat live, most would choose the latter. However, when more people are included in the experiment, the tendency is to choose for the rat to die. It can be interpreted that moral responsibility is reduced for the individual when the decision to kill the rat is a collective one; however, the incentive (namely, money) also factors in the decision.

The differences in the way of thinking lead to the central question: Is rationality the means for well-being? Relevant here is the philosophical notion of utilitarianism. The utilitarian paradigm moves beyond the scope of one’s own interests and takes into account the interests of others. This paradigm has deep roots in philosophical discourses espousing that the individual and/or society should reduce suffering in as many people as possible and aim for the greatest “net happiness”, and this comes with a quantitative dimension in which one literally counts for the best outcome. It is an impersonal and rational vision and seeks the highest good in its own way. Social concerns can fit within the paradigm except when net well-being is at stake. The interpretation that a community can benefit from “lateness” services is the result of such paradigms of thought.

At the crux of the matter is the different ways by which human motivation may be characterised. Are we what Mill calls homo economicus, or the “econonomic man”, who uses rational judgments to attain the wealth he so desires? Or, like Hume, can we problematise rationality and discover reason to be intertwined with passion? Could we even go so far as Kierkegaard, who noted that “the instant of decision is madness”?

Plenty of food for thought from the last Tembusu Forum. 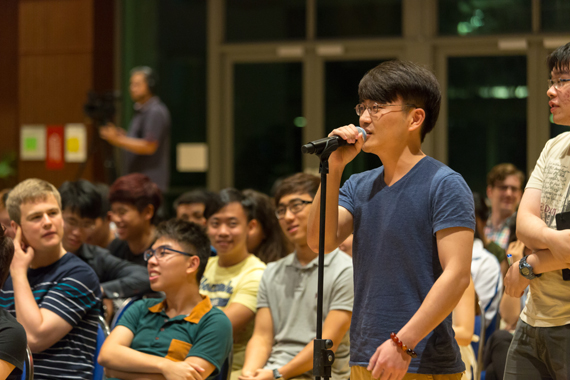