The article aims to shed some light on this hermit nation – the DPRK (“North Korea”). Instead of a day-to-day account of my 8-day trip to North Korea that will probably bore everyone, with the benefit of hindsight, I believe that the key takeaways can be distilled into 4 significant and interesting observations.

On a typical dull afternoon in November 2012, I received an email from my school, Hong Kong’s Chinese International School, offering us a chance to visit Korea… North Korea! I pounced at this chance and fast forward a few months to March 2013, I found my schoolmates and I standing in Hong Kong International Airport about to board Air Koryo, North Korea’s national carrier. Even when we were already at the airport, there was still a substantial risk of our trip getting cancelled given the particularly high tensions in the Korean peninsula between the two Koreas. Earlier that year, Kim Jong-un threatened to turn South Korea into a “sea of fire” and the US sent nuclear-capable bombers over South Korea in exercises a month before our trip. Soon after our trip, North Korea barred South Korean managers from entering Kaesong’s joint industrial park, a symbolic gesture undermining the decade-old inter-Korean co-operation. 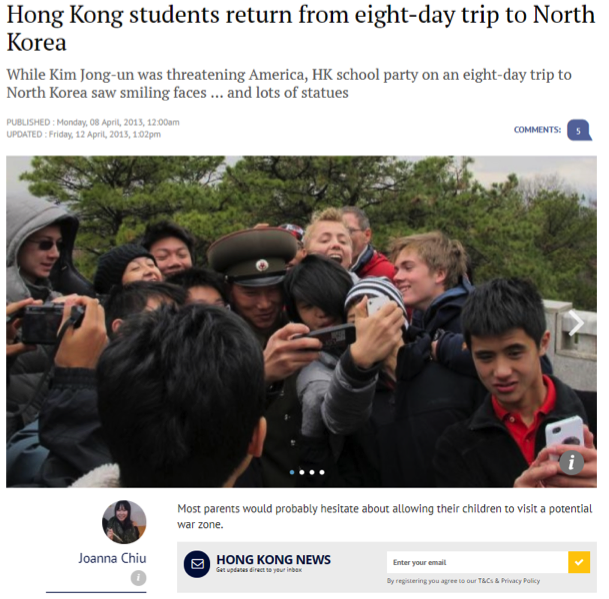 Screenshot of a news report on South China Morning Post

With our trip coincidentally falling on Easter, there were news reporters buzzing around the airport vying for the latest scoop on interesting travel destinations. A reporter approached me, and in my best, albeit desperate, attempt at Cantonese, I managed to string a few key words – “school trip”, “Easter”, “North Korea”. Until today, I am unsure if it was my futile attempt at conversing in Cantonese or the uniqueness of the destination that prompted the reporter to clarify. I’d like to think it was the latter. This was evidenced by the reporter subsequently following up with us to publish an article of our trip in Hong Kong’s South China Morning Post. I promise this seemingly irrelevant incident is not digressing, and that there is a link to the image above, so do read on to find out why!

Instead of an uninteresting day-to-day account of the trip, I believe that with the benefit of hindsight, the key takeaways from my 8-day trip can be distilled into 4 significant observations.

Observation 1: North Korea’s Juche ideology of self-reliance in light of their fondness for foreign culture 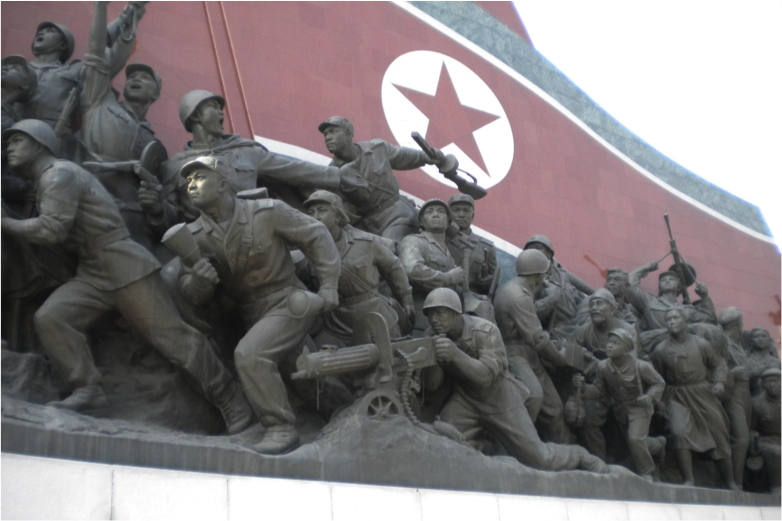 Upon arrival, we were constantly exposed to North Korea’s Juche ideology. We frequently saw statues of the Kims (i.e. Kim Il-Sung, Kim Jong-il, and Kim Jong-un) and heard motivational slogans blasted out of loudspeakers along pathways. The cornerstone of the Juche ideology was one of self-sustainability and self-reliance mainly via agricultural independence. Put simply, it was premised on the common people being the masters and driving force of revolution. 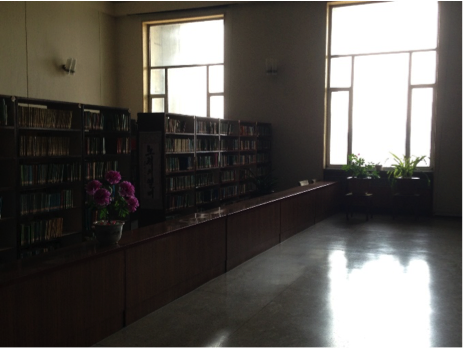 Perhaps it was due to this ideology of self-sustainability that afforded North Korea the flexibility of accusing the United States of partitioning the Korean peninsula, even though it was South Korea against whom they are still technically at war. Interestingly, they often referred to the United States as “US Imperialists” and the Koreans as “our brothers”. Fret not, the locals were acutely aware of the separation between the American people and the government. When my American friends on this trip conversed with the locals, the conversation usually revolved around culture or sports. However, the culture or sports that the locals brought up were often relatively outdated. This was no surprise, given that the locals’ main form of exposure to foreign materials was via libraries. Even when we visited the Grand People’s Study House in Pyongyang (i.e. North Korea’s central library), our guide stressed that they constantly updated their music collection with ‘modern hits’ such as Taylor Swift’s American Girl (which was released in 2009), but they fortunately realised that there were some songs which were, under any circumstances, too old to be categorised as ‘modern hits’ such as The Beatles’ “Greatest Hits”. Thus, while North Korea relied on its Juche ideology to maintain its independence, they also possessed a fondness for and fascination with foreign culture.

Observation 2: Our tour guides were keenly aware of the potential for us to use anything as propaganda when we return home.

While we were on the trip, we were under the guide’s watchful eye. They noticed our movements, our interactions with the locals, and especially where we pointed our cameras. There was a specific incident that remained etched in my memory. When one of us was about to offer some candy to a young local boy, our guide immediately stopped him. We later realised that the guides were trained to spot opportunities that could possibly be used as propaganda against North Korea. The guide apparently believed that had such a photo of us giving the boy candy been taken, that photo could be used as a symbol to show that even the young North Koreans were willing to accept the simplest forms of foreign aid that was candy.

Another example of our guide’s alertness was when our hut’s shower broke late at night and we went around with our torches in search of our guide. The hotel comprised many small huts and so we had to wander around looking for our guide’s hut. However, soon after leaving the hut, someone shone a torchlight at us from our rear. Instead of us looking for our guide, our guide had found us. It seemed like he was on patrol even after a whole day of bringing us around. That was a reminder to us that North Korean guides took their jobs very seriously. However, that was understandable as we were told that the guides were responsible for our actions.

Observation 3: The areas we visited were clean and everyone was well-dressed 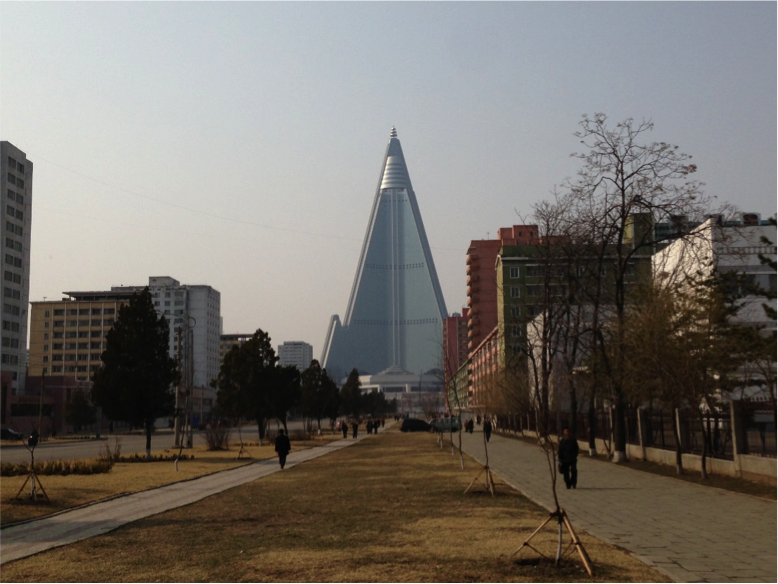 Over the eight days, some notable places we visited were Pyongyang, the demilitarised zone, a village and hill along the China-North Korean border, Myohyang-san, the Concrete Wall (overlooking South Korea), Pyongyang film studios, and the Pyongyang Metro. The cleanliness of all these places struck me. They were amazingly well maintained. It was also easy to navigate around the city centre as each part of the city centre had a theme. For example, there was a sports zone where all the stadiums and training centres were located. 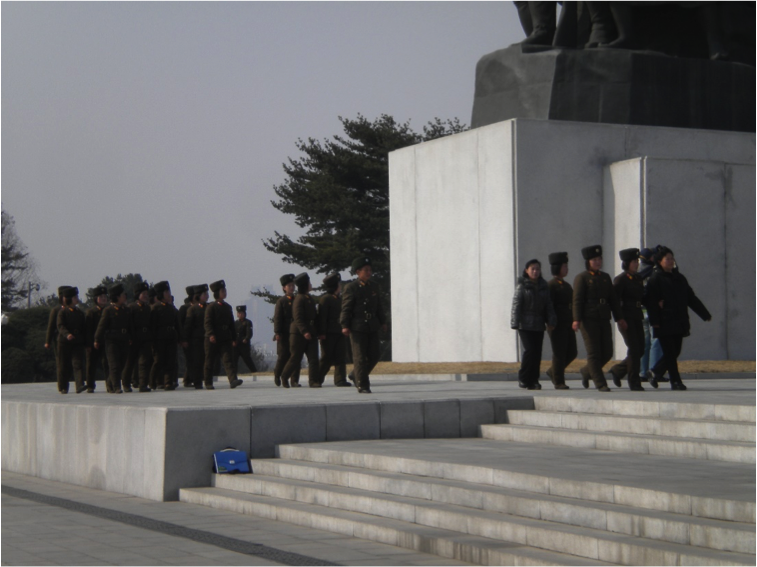 In the city and the countryside, the locals were well-dressed. We never encountered a local dressed sloppily, and the construction labourers we saw marched between places in synchronisation. We learnt from our guide that North Koreans always presented themselves well as it was seen as a way of showing respect to other people.

Observation 4: The locals were all warm and relaxed despite the constant threat of war.

While our tour was understandably tightly controlled, we did manage to interact with the locals. We visited communal farms, farmers’ residences and a school that was usually closed to foreigners (or so we’re told). Visiting the school was definitely my highlight of the trip. At the school, besides watching the students perform traditional dances, we also sat in on one of their classes and even played a game of football against the local school team (which resulted in a very diplomatic draw)! Earlier at the airport before our flight to North Korea, we bumped into North Korea’s U-21 football team and they had just played against China (yes, that resulted in another diplomatic 1-1 draw as well). 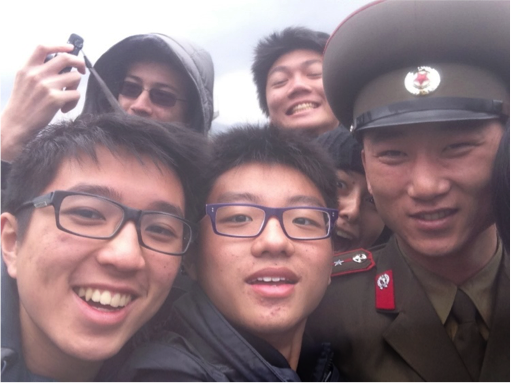 Referring back to the start of the article this ‘wefie’ was taken by me at the DMZ. In the picture featured in the newspaper article, you can see me taking that wefie if you examine closely enough! That is my hand and phone (in the black case)!

And so, these are my 4 key observations from my time in North Korea. If anyone is keen on visiting North Korea, do seriously consider it. You will likely have to fly to Pyongyang via Beijing, and you will receive a North Korean visa as a separate document at Beijing (i.e. there will be no record in your passport of your visit to North Korea). While it may be pricey, there is only a limited window to visit as the atmosphere will change if the Korean peninsula reunites and a new united Korean identity emerges.

All images used were taken by Tan Wee Liang

Having lived abroad in Germany and Hong Kong but still a Singaporean at heart, Wee Liang now calls Tembusu home. His interests include diving and skiing, and he loves Japanese cuisine and discovering new food. As he is new to writing articles, any feedback is welcome (tele- tweel96)!