Social media has been recognised as extremely polarising. The University of Oxford Internet Institute published a study showing how Facebook and other social media sites can be, and have been, used to manipulate public opinion. There have been mentions of echo chambers and how they affect what you see on Facebook. Now, if you thought that this is not a problem here in Singapore, you’d have thought wrong.

Even if you didn’t see the news, there’s no doubt you’ve seen it because it’s on social media, and it’s almost ubiquitous. However, amongst the multitude of posts on it, have you noticed that some of these posts on the topic are actually ‘Sponsored’? Have you seen which Facebook Page they come from?

Some may be relatively politically neutral. Or, some are trying to advertise something else along with it, for instance, an event:

Some may be from politicians or prominent figures in public discourse:

However, there are some that are from pro-government leaning webpages, who pretty much have (you would think) absolutely nothing to gain from advertising their posts: 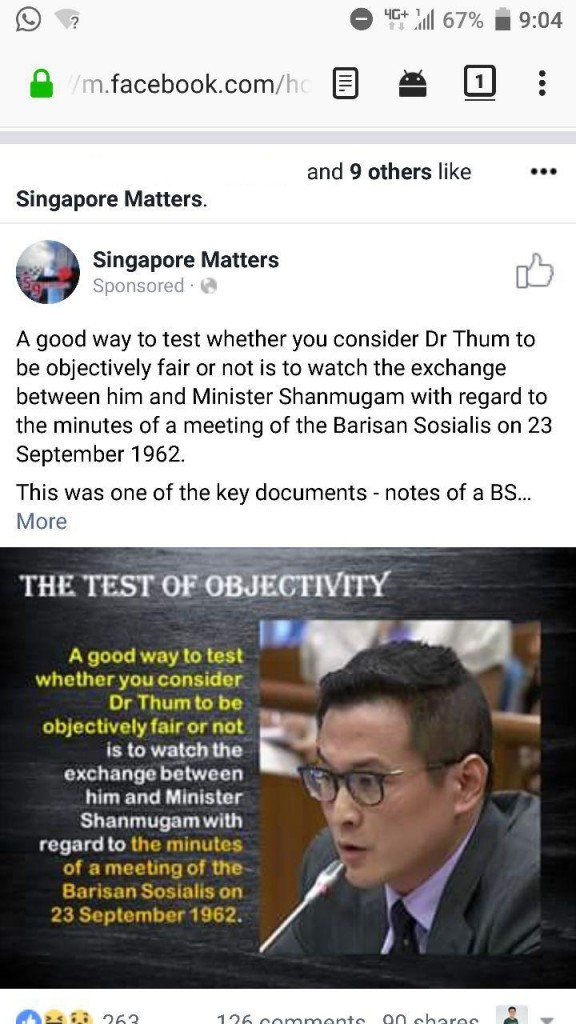 Some members of the Treehouse Team noted that they had seen an uptick in sponsored posts from politically partisan pages, like those seen above. On a personal level I did not expect to see sponsored posts about the Dr Thum vs Min Shanmugam saga, and when I first saw some of the posts, I thought that my friends were sharing posts, until I noticed the ‘sponsored’ tag on those posts.

Taking one of the above pages as an example, Fabrications About the PAP does not have an actual online website, which begs the question, why advertise to get more views and likes? They are not promoting any products that gain revenue, they do not stand to gain anything from these adverts apart from the increased profile of the page (and they do not have products to sell like social media influencers). The other screengrab here, from Singapore Matters, does link to a blog, however, there were no adverts shown – this even after my browser ad-blocker was disabled. So it’s safe to conclude they don’t stand to gain revenue either. In turn, the question then turns to why the need to have an increased profile of the page. There is only one feasible answer in my head, and it’s to turn the political discourse in one direction, be it pro-government or anti-government.

It’s worth pointing out at this juncture that I could not find any sponsored ads that originated from the anti-government leaning Facebook Pages. There can be a multitude of reasons for this, and I cannot rule out that I just didn’t see them by pure coincidence. In other words, my arguments can apply to both sides of the political divide. In addition, the Facebook administrators of the various pages do not seem to have official party affiliations. For instance, the administrator of Fabrications About the PAP Jason Chua has come out to clarify that he is not a PAP member. I am in no way saying that the government or opposition parties are paying people to do such things, and there is no credible evidence to prove that such things are happening.

Why is there an issue with this type of advertising then, you ask? The issue is straightforward to me. Not everyone can discern what they read online properly – many believe what they read, and this is an attempt to put forward one camp’s point of view over another. It’s pretty much paying to get an attempt to shape your thoughts. The emphasis is on getting an attempt – it ultimately does depend on the reader.

This is disturbing on a personal level as I personally feel that this is hindering proper political discourse, and in fact, further polarizing an already fractious political discourse scene on social media. This also means that there could be potential for people to use money to influence discourse in a way that favours them, even if they have no links to any particular political party. This is pretty much no different from how Russia-linked Facebook accounts had purportedly paid for sponsored posts on Facebook targeting segments of the US population. One would certainly not want that to happen in Singapore.

Given this uptick of politically sponsored advertisements, it is worth reiterating on the importance of Media and Information Literacy. The Media Literacy Council in Singapore has guides for parents on how to teach their children how to have Information Literacy. They bring about a few pointers that I feel are more important than ever for people to know, even as adults.

The first one is credibility – who owns the site and who is speaking? The guide encourages people to question the provenance (origin) of the website, to see if it’s a commercial site trying to sell goods, or a personal site containing opinions instead of facts. It then encourages the user to find out the points of view on the website, whether they are backed up, and to check for bias of the source. The guide also encourages corroboration, to check with other sources about what the website may claim. One should also check whether the time of publication of the information is recent, given that things change over time and the information you are reading may be outdated.

These pieces of advice are very applicable to social media as well. When you see a post, try to see if you can find out what its motive might be. Some might be easy to spot (eg. Fast Food restaurant posts), some might be harder to detect. After that, try and figure out whether that social media page has an agenda. It does not need to be political – it could be a Page sharing posts encouraging one to purchase bitcoin because it’s a page that is pushing for the adoption of cryptocurrencies. After that, find out whether the page is peddling a one-sided view of affairs. It’s extremely easy to fall into this trap of an echo chamber, where you fail to see the opposing camp’s point of view.

All in all, the key takeaway is to have discernment. I cannot emphasise this enough. Think for yourself, and do not be swayed easily by what you see on Facebook and social media. It could just be someone paying to have a go at shaping your opinion. And I’m pretty sure that you would not want that to happen to you. And ask yourself when you see a post from a page that talks politics – are they paying to shape your worldview?

One of many Ryans in Treehouse, Ryan Quek is a Year 2 Business and Economics Double Degree (Still Surviving!) Student. He loves photography and food, and likes to delve into socio-political issues, tech and sport. Also has a passion for trivia quizzes.