“My parents do not believe that just because I was born different, I should be treated differently.”

Born with spinal bifida, Paralympian Theresa Goh, 30, uses a wheelchair to get around. At 17 years old, Theresa was the first female Singaporean swimmer to qualify for the Paralympics. More recently, she was one of the three medal winners from Singapore in the Rio Paralympics, winning bronze in the 100m breaststroke SB4 category.

On the evening of 5th September 2017, Tembusu’s own tFreedom community invited Theresa down to Tembusu College to share an evening with Tembusians on the challenges of being a double minority – a person with disability and a sexual minority – in Singapore’s public spotlight, and her experiences as an ambassador for this year’s Pink Dot. Pink Dot is an annual rally held at Hong Lim Park for the acceptance of Lesbian, Gay, Bisexual, and Transgender (LGBT) persons. Theresa self-identifies as “queer”.

Describing her parents as “practical” and “realistic”, Theresa shared that her parents encouraged her to be independent since she was a toddler. Growing up, her parents installed switches at a height she could reach so she could access it by herself.

Despite her physical disability, Theresa’s parents wanted her to be active and healthy from an early age. The choice for what physical activity to enrol Theresa in seemed obvious to her family.

Theresa loved swimming, saying, “I particularly enjoy the water because it’s the place where I feel the freest. I can go wherever I want; there’s nothing that’s stopping me. And that’s very rare in this world for me, for people in wheelchairs or for people with mobility issues.”

Her family would spend every weekend at the swimming pool. When Theresa was twelve, a volunteer from the Singapore Disability Sports Council suggested she took part in local competitions. Theresa took up the volunteer’s suggestion – and the rest is history.

Theresa recalled a time when she was asked to identify an Asian athlete whom had come out of the closet. She couldn’t. “Representation is so important,” she affirmed.

She contended that when more people voice that it is ok to be gay, it will set off a chain reaction toward societal acceptance. “10 years ago, it is acceptable to use ‘gay’ as an insult. But now it is not acceptable. And this happened because someone started speaking out.”

Nothing negative has resulted from her public coming out, although she “had a shield up” for about a month after coming out. While Theresa is now “pretty comfortable” with her sexuality, it had taken many years.

When she was in secondary three, she recalled that her mother told her not to listen to Russian faux-lesbian band t.A.T.u as it was a “bad influence”. Incidents like this made her feel she should not come out when she was very young.

She did confide that she liked a girl from school with her sister. Her sister, however, divulged the secret to their mother. Theresa sidestepped the issue by saying that she liked that girl “as a sister”.

Theresa wrestled with the inability to live authentically by “telling little lies” to herself, and to “coast by” day-by-day. In 2005, when a friend asked her if she had a boyfriend or girlfriend, she started to realise that it was ok to be queer. She was 18.

Her parents’ views have since evolved. When she was in secondary five, her mother told her out of the blue when they were at a petrol kiosk that as parents, their ultimate desire is for her to be happy – regardless of the gender of her significant other.

After winning a bronze medal at Rio Paralympics, Theresa realised how much the Singaporean public looked up to our athletes.

Taking the opportunity, she began speaking up about LGBT issues in the unlikely world of corporate seminars. It seemed a good first place to test the waters on LGBT activism in Singapore. Besides, Theresa noted, corporations were willing to let her speak her mind. “You don’t get to pick and choose which part of me you want to see.”, she added.

It was not an easy step to make. She is saddened that she knew of at least five closeted LGBT athletes in Singapore who were afraid they would lose sponsorship if they came out. Some of them are not even out to their parents, she added.

While Theresa acknowledged that it is not an obligation for LGBT public figures to come out, she noted that they have the power to shape public opinion.

Wanting to use the publicity she gained from the Paralympics to make a difference, she became an Ambassador for Pink Dot 2017.

“I didn’t have a reason to say no (to becoming a Pink Dot Ambassador). The only reason could only be that I was selfish,” she said.

She added, “My family was cool with it. My friends were cool with it. I’m cool with it.” Being comfortable with friends and family is not a privilege accorded to LGBT persons in some countries where they risk being killed. She cannot fathom herself in that situation. Singapore, for all its faults, is somewhere where she feels safe. She went to mainstream schools all her life and was “so lucky” that she never got bullied.

Theresa shared that she “opened her eyes” after witnessing violence against the LGBT community both in Singapore and abroad. She talked about the videos she saw on Facebook of transgender individuals being murdered overseas, and hearing about the unfortunate plight of trans-sex workers via word-of-mouth.

“I hope I can make a difference,” she said. For her, it is quite “frustrating” that there is even a need to campaign for societal acceptance of the LGBT community. 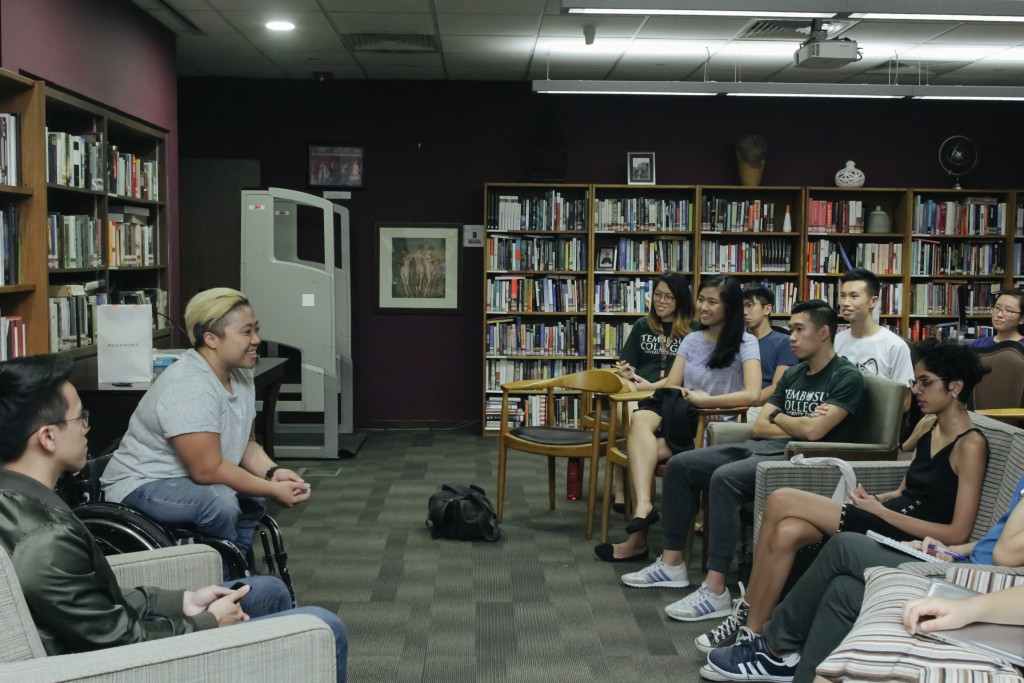 The elusive quest for LGBT representation in Singapore’s media

Theresa shared, “Growing up, I didn’t see people with disabilities in the media or on TV or on movies. And what more like LGBTQ?”

The free-to-air radio programme code states that, “information, themes or subplots on lifestyles such as homosexuality, lesbianism, bisexualism, transsexualism, transvestism, paedophilia and incest should be treated with utmost caution” and that “their treatment should not in any way promote, justify or glamourise such lifestyles. Explicit dialogue or information concerning the above topics should not be broadcast.”

The free-to-air television programme code pronounces, “music associated with drugs, alternative lifestyles (e.g. homosexuality) or the worship of the occult or the devil should not be broadcast.”

“There was like a double erasure … I felt invisible… So I had a lot of confusion growing up – knowing my identity and figuring out who I was – because I did not see any representation anywhere,” she added.

It was only when Theresa was 15 or 16 years old that she, at her uncle’s house, chanced upon “Strangers in Paradise”, a graphic novel with queer characters and themes. She was surprised as it was “not the heteronormative thing you would usually see”. She quipped that her mother even bought her copies of the graphic novel, and that this was her first foray into queer literature.

She emphasised the importance of media representation to the LGBT movement: “what you see is what you think”.

“Speak up against discrimination in all forms”

The unprecedented regulations Pink Dot 2017 faced inevitably became a topic during the dialogue. In 2017, in order to comply with new regulations prohibiting foreign participation, Pink Dot had barricades set up and participants had to pass ID checks in order to gain access to Hong Lim Park.

Theresa has mixed emotions on what happened. On one hand, the barricades made her feel “caged in”. On the other, the barricades provided a “sense of protection”.  Nevertheless, she said it was a “positive sign” that people still turned up for Pink Dot despite it being harder to get in.

Theresa said her role as an LGBT ally was to “lift people up”. Homophobes “boggle” her mind: “How does homophobia make (homophobes) happy? What’s the point (of homophobia)?”

Religion, for her, is not a reason for homophobia. She pointed out that she had religious friends who are also “very loving” towards her. The golden rule for all parties should be “don’t harm people”, she opined.

Theresa said everyone, regardless of whether one is marginalised, should “speak up against discrimination in all forms” – be it racism, sexism or ableism. She cited the example of her best friend, fellow Paralympian Yip Pin Xiu, who is straight and has no qualms of calling out people who insult others as “faggots”.

She said that while the physical environment has become more accessible to persons with disability, Theresa believes mass culture still views disability as an afterthought. “If it doesn’t directly affect them, they don’t think about it,” she remarked.

While being LGBT is not illegal per se in Singapore, it “just doesn’t make sense” for section 377A of the penal code to remain in our law books. Section 377A criminalizes “gross indecency” between two men – regardless whether the act is consensual or done in private.

Having said that, she is hopeful for what the future holds. “Slow progress is better than no progress.”

She observed that social media “plays a big part” in bringing about progress. With the younger generation being more liberal, open-minded and educated, she has cause to be optimistic.

Bryan Kwa has a keen interest in current affairs and is a FASS student intending to major in Political Science. He mulls over the relationship between political institutions and the negative liberties of humans. The ‘invisible hand’ of the market fascinates him and he also ponders about the nexus between industry and political power. He dreams of upholding the fourth estate: posing hard-hitting questions to the powers that be and holding them to account.