Oxford graduate with double First Class Honours. Former civil servant. CEO of an international business consultancy. You’d think someone with such credentials would be a prime target to be poached by the ruling party, to be groomed for high political office. Yet, you can currently find him on the opposition bench, which has been branded by the ruling party as a “mouse in the House” associated with “fallacies”, “insincerities” and “untruths”. (Source: TODAY)

He is Non-Constituency Member of Parliament (NCMP) Leon Perera, whom Tembusu’s public policy interest group Polity invited for a dialogue on the evening of 22 August 2017.

Far from the caricature of opposition politicians opposing for the sake of opposing and not offering constructive criticism, I found Mr Perera of the opposition Workers’ Party (WP) to be a man of reason. Despite facing intense questioning from the students, he maintained his composure throughout and answered every question in a cool, calm and collected manner. His answers were coherent and eloquent.

Let me be upfront: I am no fan of WP. In fact, I am somewhat wary of WP given that they adopt a hammer (reminiscent of communist symbolism) as their logo and that socialism is enshrined as a guiding principle in their Constitution.

However, I found Mr Perera to be quite a pragmatist instead of an ideologue – similar to how those in the ruling party would describe themselves. He offered real world examples to back up his arguments. I got the sense that he joined an opposition party only because he believes in political pluralism.

The main dialogue session lasted around two hours and Mr Perera stayed back for about an hour and a half to answer follow-up questions one-on-one, leaving Tembusu College around 11 pm on a Tuesday night.

The discussions were free flowing and wide-ranging, but one central theme stood out: How to build a resilient Singapore that would stand the test of time?

Mr Perera posited that political openness is a necessary condition for a dynamic and resilient society. He cited Thailand and France as examples of countries with such openness. For example, in Thailand, it is popular to ridicule the political system. While Thai politics has fallen to dysfunctionality with a gridlock between the red and yellow shirts, and Thailand facing an uncertain transition to a democratic government, its economic growth has exceeded market expectations. (Source: World Bank) Bangkok is a very liveable city and its cost of living is cheaper than Singapore’s. Despite the failure of the political class, the underlying social institutions kept the country going, he said. Meanwhile, in France, while there is stasis between established political parties, the openness and contestability of the political system has enabled an outsider (or, the relatively less established) Emmanuel Macron to enter and win the presidency. Political openness allows the country to stand the test of time, he claims.

Contrary to conventional wisdom in Singapore, Mr Perera posited that long-term policy making is not incompatible with a competitive political system. He reasoned that if the weight of public opinion were behind a certain policy, that policy would be in place regardless of which political party is in power. As such, he believes that a healthy civil society and political education are important to a country’s stability.

“Do we have the institutional ecosystem to get rid of a bad government in the future?” he questioned. 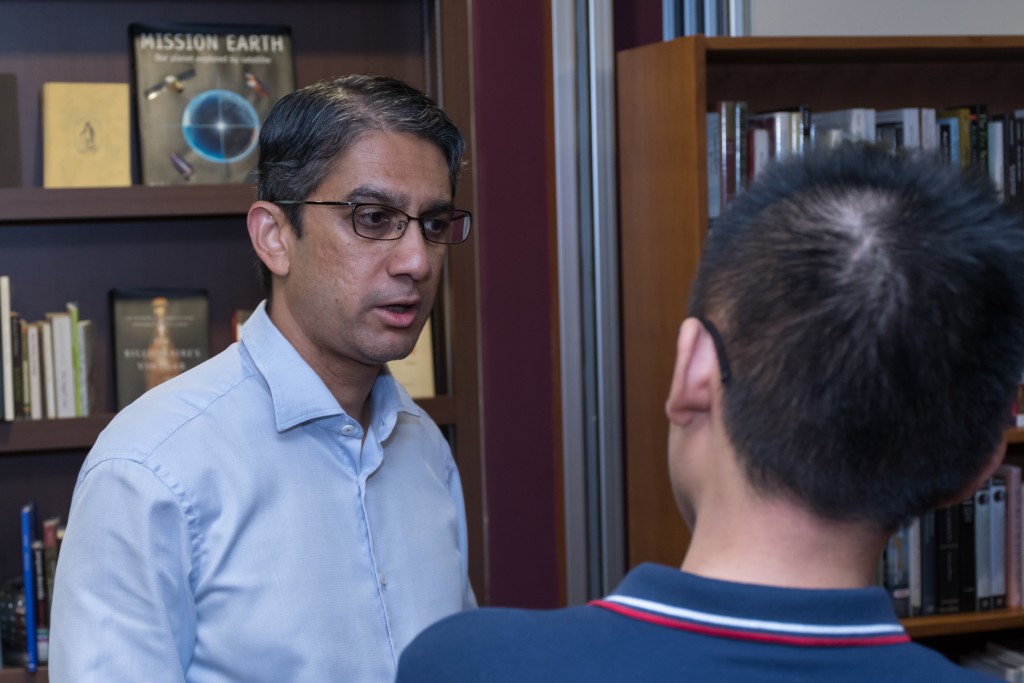 Mr. Perera stayed around after the interview to chat with the participants.

Mr Perera, who entered Parliament in September 2015, shared that he was shocked at the speed of business in Parliament. He recounted an instance where Parliament passed six bills after lunch in one day.

Describing the Committee Stage as a “ritual” that lasts for around five minutes, Mr Perera said that a bill rarely changes as a result of parliamentary debate. This peculiarly occurs as one party has a “hyper majority” – 93% of fully elected seats.

I could relate to Mr Perera’s assessment. I can recall the time I sat in on a parliamentary sitting and saw the Republic’s Constitution amended swiftly. It was July 2015 and the Government was seeking parliamentary approval to include Temasek Holdings as a contributor to its Net Investment Returns framework, allowing the Government to spend based on Temasek’s realised and unrealised capital gains and not just the investment company’s actual dividends. This Constitutional amendment enabled the Government to spend not just the money we actually have, but also money that we expect to have in the future. I was taken aback that an amendment to the most basic law of our land and one that has a major and direct impact on our country’s fiscal health was passed without any heated debate in Parliament or in the wider civil society. I was also appalled that the wider society was more interested in Government handouts rather than the amount of centralised power that exists.

Mr Perera expounded that the function of parliament is to raise issues publicly and influence how laws are implemented. “For example, contempt of court and defamation laws – How [are we] to breathe life into them? How [can] the AGC choose to interpret and implement the law?” Parliament plays a role in marshalling public opinion to influence the government and in public education, he said.

Mr Perera, who grew up on a diet of politics by watching political debates, wished today’s politicians would openly debate and defend their views instead of moving into the realm of public relations. “To disagree is not to disrespect,” he said. Nevertheless, he acknowledged that voters have to express their will in order for such a change to happen.

On Singapore’s international standing after the Oxley Road saga, Mr Perera opined, “I don’t think it’s a bad thing to be seen as having robust debate. As a businessman, you want a system with checks and balances.” He believes too authoritarian a system might lead to instability. “Debate, disagreement, [and] democracy can help with Singapore’s standing and attract foreign direct investment.”

He also called for an independent ombudsman. Professor Tommy Koh, Rector of Tembusu College and Ambassador-at-large at the Ministry of Foreign Affairs, has proposed something similar.

Stepping up of opposition parties

Mr Perera shared that it is untrue that the WP has no ambition of forming the government. Instead, it is a question of the approach of getting there. He said the WP would move towards that goal gradually and in a step-wise manner. WP would first need to grow their presence in Parliament and form a shadow cabinet. Growing familiarity and acceptance of the party is important to ensure sufficient support for the government, he said.

In response to queries, Mr Perera said that the WP would evaluate whether to accept the NCMP position after each GE. While there is the benefit of having more voices in Parliament, the NCMP – and NMP – scheme risks developing a token opposition, which is not a real opposition that can bring about real change, he expounded. If NCMPs and NMPs are “not electable”, their role is only “ventilation” and “cosmetic”.

While NCMPs and NMPs were recently given equal voting rights as their fully elected counterparts, their numbers are still limited and so is their ability to impact the outcome of any vote in Parliament.

Mr Perera opined that the government heavily influences the mainstream media in Singapore. For better or for worse, there is some grain of truth in that statement, given the Newspaper and Printing Presses Act and the Broadcasting Act.

He acknowledged that the media landscape is changing due to competition from online media. He believes this to be healthy, for it limits the extent of bias and lopsided coverage. However, he pointed out that online outlets face regulatory constraints such as take down rules. He thinks these rules may be tightened, for the government has announced that Parliament will debate how to fight fake news.

Still, he suggested that the ability of online media to influence public opinion is very limited, as only a minority read online news and an even smaller minority trust online news to make decisions. He pointed out that most people still read the broadsheet newspapers, and that TV is the most emotive medium of all. 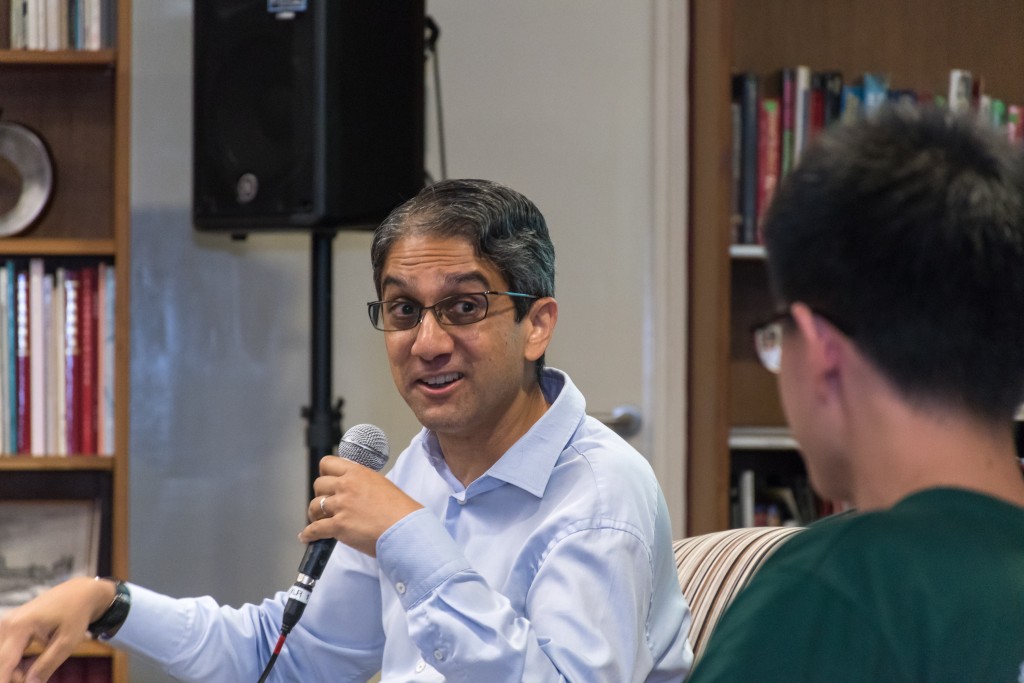 Mr. Perera during the discussion.

Mr Perera also spoke on the future readiness of Singapore’s economy. Based on his perspective as a former civil servant at the Economic Development Board and as an entrepreneur, he said that a Whole-of-Government approach is needed to attract foreign direct investments. He shared the need for value-creators to create the basis of prosperity and for the government to place more confidence in our Small and Medium Enterprises (SMEs) and start-ups.

While Mr Perera may have differing views on the nitty-gritty details of economic strategies with the ruling party, it appears to me that he is on the same page with the government with regard to the macroeconomic direction Singapore needs to take – he is, after all, using the same economic buzzwords as our Cabinet Ministers.

I wonder: Considering that most major innovations were from the private sector, would a more laissez-faire approach, instead of the state steering the direction of the economy, reap greater rewards?

In order for value creation to occur, Mr Perera said there must first be confident citizens with clear and ambitious visions. “You must have a vision for the country. You must have ideals. Believe in something.”

He called on youths to get involved and engaged, asking them to further their views by talking to people and persuading or influencing other people. This includes petitioning their MP and writing for the media.

Describing himself as an “optimist of the will”, he said, “The worst thing we can do is [to] lose hope. There must be hope.”

I echo Mr Perera’s call. We get the democracy we deserve. The resilience of a country depends on the resolve of its citizens. We have to stand for something and speak up for it. That will ensure we remain the masters of our fate.

Bryan Kwa has a keen interest in current affairs and is a FASS student intending to major in Political Science. He mulls over the relationship between political institutions and the negative liberties of humans. The ‘invisible hand’ of the market fascinates him and he also ponders about the nexus between industry and political power. He dreams of upholding the fourth estate: posing hard-hitting questions to the powers that be and holding them to account.