In addition to what Marshall wrote about blonde hair, a formerly blue-haired person now brings you another tale about the power of coloured hair. 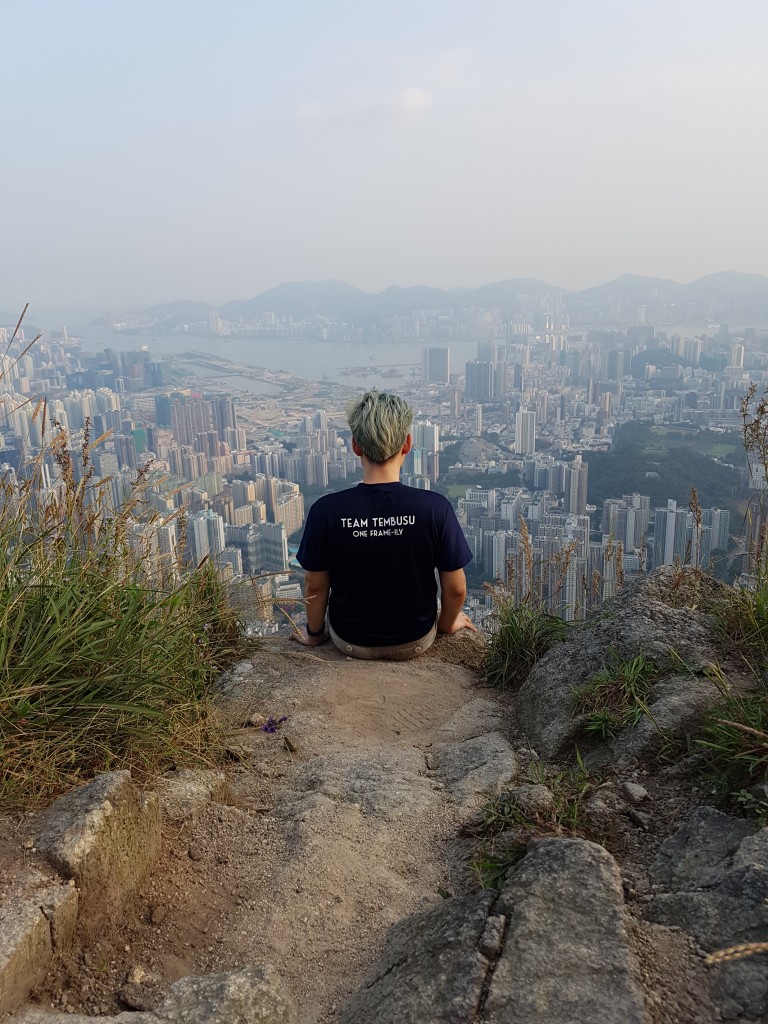 For $150 and 3 hours of my time, my hair was bleached off its black pigment and smothered in blue. As per protocol, I shall answer the questions “Why did you dye your hair?” and “Why blue?” First of all, it was not an impulsive search-for-identity-sort-of-thing. Nor was it blue because, as some Lit teachers would say, the author was trying to express the intense sadness in his life. My friend’s midnight blue hair colour inspired me and gave me the desire to try it out. After all, it was a new experience and one that I could only enjoy while I am young. Then why now? The answer is far less dramatic. It is because from the 3rd year of medical school until as long as I would like to keep my career as a doctor, I can only have ‘natural coloured hair’ or so says the dress code guidelines.

Because here’s the thing about dyes: the hair on the colour chart appears to be darker than the actual product because on the chart the hair is densely packed, so light doesn’t penetrate, whereas on your head, the hair is less densely packed and light travels through, resulting in a lighter shade.

Having blue hair meant that I stood out from the crowd, a blue dot in a sea of black and brown. My friends did use my hair as a marker to spot me at the army half-marathon. Standing out made me feel more self-conscious and exposed than I already was. I think it’s human to admit that we all are self-conscious. Having blue hair intensifies that feeling by so much more. You feel that people are looking at you; I mean, they have a reason to, you have blue hair. 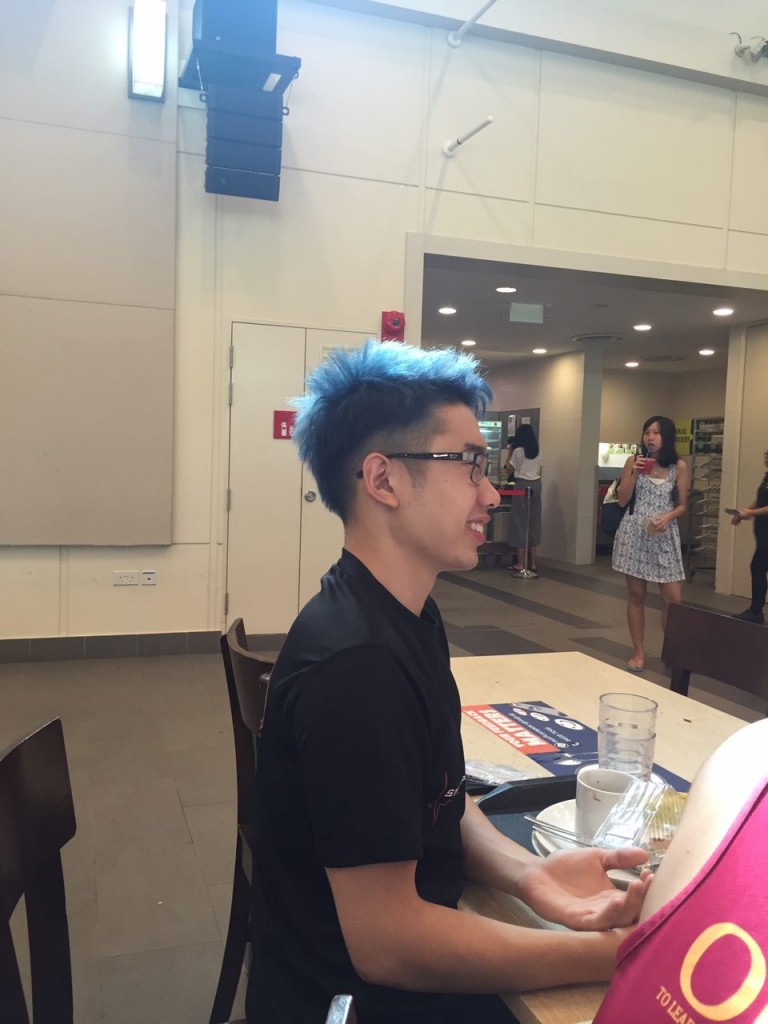 Soon, however, I outgrew those emotions. The stares, the faces, the double takes, I took them into my stride. They had no effect on me. I began to ignore the feeling of self-consciousness.  I learnt that there are two parts to feeling self-conscious. One consists of actual judgements you get from people, the other consists of judgements that your mind makes up. And to deal with it, first, you ignore the world, and then, you ignore your mind. No one really cares, and if they do, it doesn’t really matter.  Knowing that made me feel at ease being an outstanding blue thumb. I felt fine. In fact, I felt great standing out.

Aside from being empowering, my blue hair cushioned the awkwardness that came with strangers and the start of a new academic year. Uncles and aunties at the shops complimented my hair and started chatting up with me. It was easier for me to start a conversation with anyone. I think going blue really signalled to people that I am a fun person, and people were more open to me and felt comfortable around me.

Lastly, my blue hair gave me the gift of excuses. I got away with saying and doing a lot of stuff just because my hair was blue. Blue showed that I was not limited to how people perceived me; I was not bound by limits or rules. I could say shit and no one would bat an eye. I was freed to do and yperlink to what Marshall wrote about blond hairsay many things that were normally not considered right for me. I pushed the boundaries and found new limits and new perspectives.  I did many things that, without blue, I wouldn’t have done. 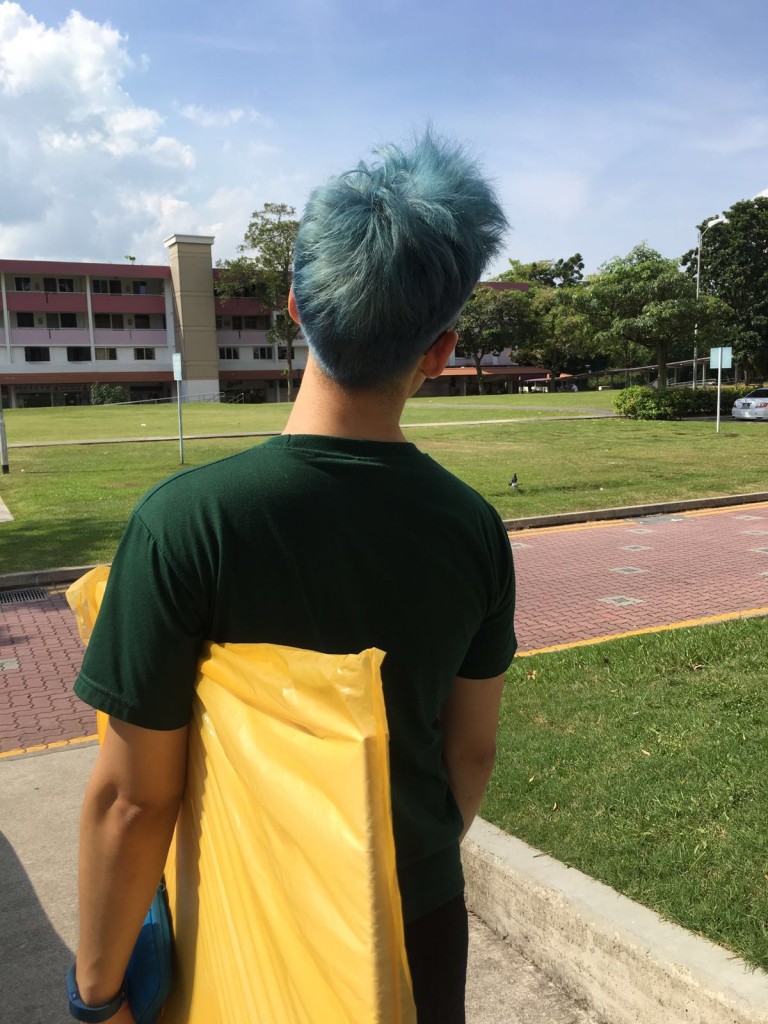 As I finish this piece, my hair is but a reminiscence of its heyday. Gone are the strands of blue, and I am left only with a few blonde patches surviving them. Much joy was given to me by the blue. Now, when I look back at my 2nd year, I have a story to tell. The story of how blue empowered me.

Marcus is a 2nd year Ponyan from Tembusu. In his free time, he studies medicine.