Outside the undifferentiated forces roar; inside we are very private, very explicit, have a sense indeed, that it is here, in this little room, that we make whatever day of the week it may be. Friday or Saturday.

Through such an utterance, in such a gesture, we ostensibly lay claim to a space exclusively our own. Yet the simple generality of calling a space merely as ‘my room’ belies the complex sense of possession that entails such a claim. For when we appropriate space, we inevitably assert an adumbration of personality, one projected, drawn and fixed in physical terms within the expanse and constraints of a single room. We demand then, an absolute specificity and individuality; a sheer, radical differentiation of our rooms from other similar — indeed, even identical — rooms, because it is explicitly one’s own. It is as unique, particular and exclusive as one’s name, for, just as how, even though we might share names with others, our names and rooms remain completely ours, because we recognise within them an inherent plenitude of subjectivity; a ‘mineness’ that remains as inviolate as one’s selfhood, or any such approximation of it.

Yet, perhaps such a proposition is excessively hyperbolic: after all, we don’t always guard our rooms with an aggressive territorial instinct; in fact, we often allow others to enter our rooms, sometimes with or without permission, and such instances never incur any violation of any sort. Yet, surely spatiality, like any conception of the self, is more than mere material distances or measurements; certainly there exists too a figuration of one’s room that manifests, perhaps metaphysically ‘throbbing’, in a singularly familiar manner, a conception that remains closed off from others, independent of others’ merely physical presence or absence.

And this familiarity possibly surfaces only because, as Jesslene so suggests in Tembusu, Living, space acquires meaning from inhabitation, even if one confers such meaning unreflectively. In any room then, perhaps yours, there are always intimations of meaning, from physical possessions, to, say, even a bedtime routine you perform every night in privacy — and even privacy itself inevitably entails familiarity with one’s consummate personal ‘space’.

And as such, one’s room is thus always replete with meaning, a meaning that moves beyond form or function, perhaps one that is only an immanent ‘mineness’ that cannot be articulated to or perceived by others. In their eyes, furniture and furnishings remain as mere miscellany from which only certain habits and traits can be determined; but yet, much like the obscure vagaries one elicits from osteomancy, the entire self can never truly emerge, nor can it ever fully be revealed through mere objects. One’s possession of space remains resolutely sacrosanct, where its familiarity abides like a safe harbour to which one can always retreat in any number of storms, where one is always free to retrieve the flotsam of the self drifting out in open life, to recollect, and reorganise, come what may.

But beyond tranquillity, however, there lies too disquiet, there lies too unrest. For to possess is also to seize, to occupy, to authorise, to exercise power — and power never comes without resistance. And so does a room resist inhabitation, albeit in subtleties… 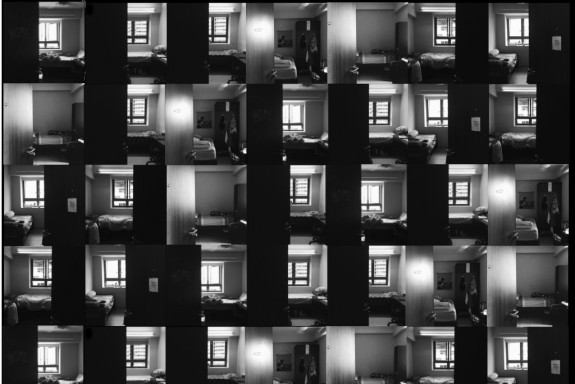 Suppose, there lay by the ledge of your room’s only window, a spot of bare concrete showing through the cracking paint, lying disconcerted, embarrassed. So exposed, it appears on the otherwise smooth surface like an unsightly scar on the skin. There: an inveterate blemish surely fashioned not by your own design, not conceived when you first envisioned your room. Whose then… whose fingers were those that picked on a raw scab of paint – how many months ago? In such intimate minutiae, history, both personal and impersonal, encroaches into a spatiality you have arranged around you. The past comes ‘throbbing’ under the skin with its own private echoes, its own intimate ghosts. And so, it has too perceived the scene, and then foretold the rest to you: that your space is merely but one such figuration of space, a momentary definition that exists in tension with that that once was, supervened too by that which is to be, when someone else comes to possess this space as his or her own. You are thus accommodated, accepted; but here you live and leave undifferentiated, one among the many.

And perhaps the same could be said about our dear home of possibilities. To seek for possibilities, one seeks too to possess, and one too must be endowed with potency to possess. But in such an attempt to possess Tembusu as one’s own space, are we not instead left weary, after wrestling with inherited traditions, struggling against systems, transcending limitations and negotiating injunctions from the past? And when possibilities are seized, projects realised, are they not too established with the risk of dissolution into an abstraction of ‘Tembusu: its people, its history’ — of what was done before, but failed to survive? And if they do remain, what space is there left for future generations of Tembusians? In turn, under whose shadows must they labour to attain ever-newer possibilities?

Certainly, history is a nightmare we strive to awake from, while the future is an unknown depth we can hardly fathom. We will not fall into determined patterns, but indeterminacy is equally daunting. And so, what we are left with are therefore only the lacunae between. Despite their insignificance, their transience, however, these gaps need not evoke only resignation. For it is also only within these spaces where one can inscribe the self, figuring like a punctuated caesura that both breaks and bridges the past and future. The recognition of contingency in spaces then, must thus be both empowering and liberating. After all, the nature and meaning of spaces is perhaps always malleable because it remains, howsoever briefly, wholly one’s own, within which one truly comes into one’s own. In these spaces we need not be squeezed out, we need not dissolve undifferentiated; we negotiate, we make do. We are but mere rivulets in the tumultuous tides of time, but we each come together with such force, such vigour.

And outside, the undifferentiated forces roar.