Googling Bukit Tabur in Taman Melawati, Gombak will reveal praises for its quartz ridge being a world-class geological site, treasured for its high scientific and aesthetic value. Standing at a height of 396m, the hill is no stranger to bad press, having claimed multiple lives with its precarious drops. With about nine major accidents since 2009 and two deaths in end December/early January, the local government has since implemented the need for permits to hike. It did not deter us, or rather, Zhimin as our Offtrek team of eleven entered via the Klang Gates entrance at 830am, starting our trek at Tabur West.

Zhimin had constantly reminded us to train, which most of us unfortunately didn’t (or conveniently forgotten to). The initial path was steep, making the first 10 minutes of the ascent one of the most tiring parts of the trek. Quite a few of us were left breathless when we reached the first designated rest point, and that was not even checkpoint one out of the eight we planned to complete.

The remainder of the hike was enjoyable as the gradient of the path eased. The open areas we reached each presented an unhindered view of the Kuala Lumpur skyline, the urban part of KL on one side and the natural part on the other. 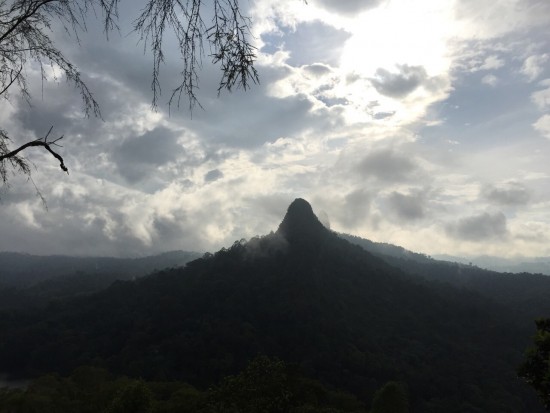 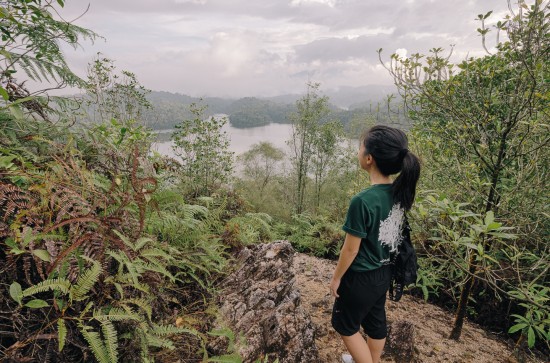 We trekked at a steady pace, with Zhimin guiding us at the front, selecting optimal paths for us to follow, and Daren sweeping at the back, exploring alternate paths himself. There were minimal interruptions except at rest points where we paused for water, and where Lynn and Gerald took most of our photographs. We chatted now and then, but otherwise it was moments of comfortable silence, occasionally dispelled by an outburst of laughter at Zhenxi’s jokes. We bumped into fellow trekkers, including one man in his 50s who seemed to have finished his climb bringing nothing and simply wearing slippers.

Mistakes were unforgiving here, for any fall down the vertiginous slopes will be inexorably lethal.  Thankfully, none of us made any. Minutes blended into hours as we continued up and down through different peaks, helping each other through steep climbs, spotting low-hanging branches and hazardous edges. We watched out for each other as we advanced through the narrow paths, climbed the rock walls, and skirted the jagged rocks.

The experience culminated at checkpoint eight, a blanket of uneven ground that were pretty much huge rocks of different heights. Upon reaching our planned final checkpoint, everybody stopped, looked, and took in the breathtaking scenery. The view was incredible (and optimal for boyband shots), and we rested and took more photographs. 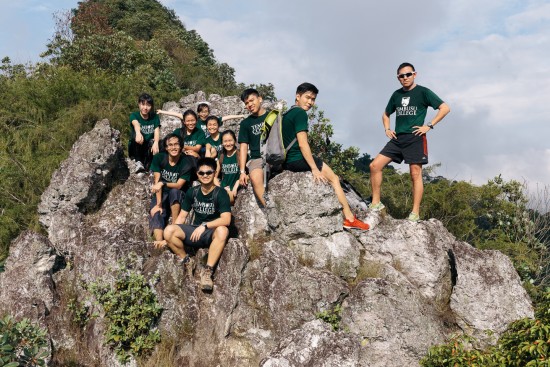 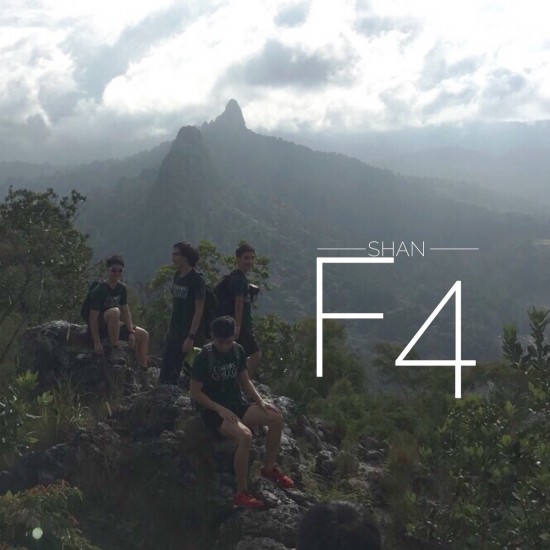 Sorry, I just had to…

Zhimin’s brother helped us with an initial exploratory survey a few days back, and advised not to bring everybody up beyond checkpoint eight. Zhimin’s plan was to get everyone to checkpoint eight, and then have the guys proceed to conquer checkpoints nine and ten. 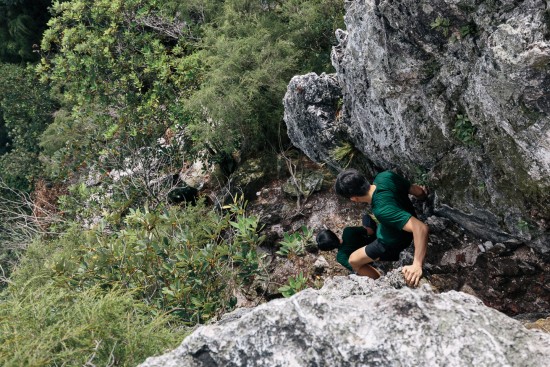 At the edge of checkpoint eight lies a precipitous descent requiring the use of metal handles and a rope as support. The footholds are far apart and the narrow paths are unfriendly, further compounding the challenge. With some effort and faith in the rope, five of us guys descended towards the famous checkpoint nine. The highlight of the trek for me was scaling a sheer rock wall here and seeing the rest of the team on the other side at the apex. More importantly, you can stand there and pretend you are Rafiki carrying Simba. With the most difficult sections accomplished, we traversed to our final location at checkpoint 10. The weather remained grey, with the clouds unfortunately blocking the sight to Genting Highlands, but otherwise offering a spectacular view. 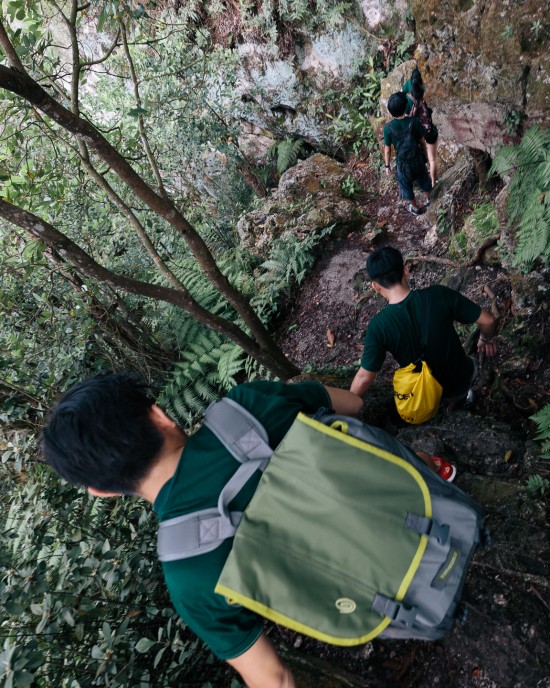 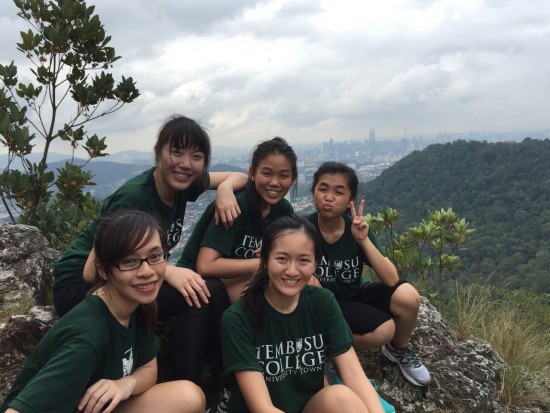 The ladies at checkpoint 8

After enjoying the scenery offered at checkpoint ten, we reunited with the rest of the group and retraced our steps back to the entrance. We completed the return trip in a shorter time, driven by and singing along to music churning from Daren’s speakers. About four hours later – with cuts, slight bruises, and a sprained thumb, but otherwise feeling triumphant – Tembusu Offtrek completed its primary objective.

The trek was the main highlight, but it was definitely not our only purpose for entering KL. 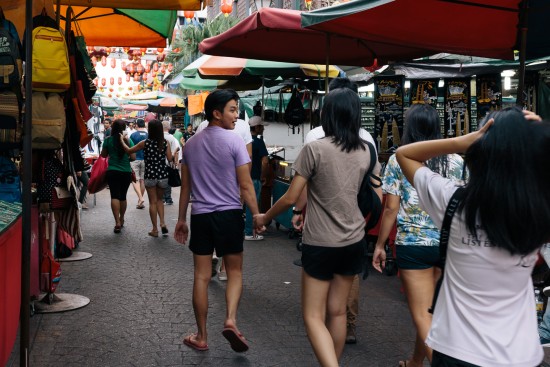 Roaming the streets of Chinatown KL

Ingesting calories, I suppose, is inherent in overseas travel, and despite initial misgivings, I threw away (almost) all notions of being at least moderately healthy. Although Zhimin laments at the lost opportunity to taste his favourite beef noodles – the stall was temporary closed – we still zestfully tore through the remaining KL favourites. Heaps of satay, stingray, ramly burgers and honey-infused char siew were just part of the cornucopia of food digested. And one of the highlights was of course,

Us: Joanna, do you know what meat this is? (pointing at the name venison on the menu)
Joanna: Yah, goat!

Topped off with a massage session and for some of them, copious servings of draft beer, we had an insanely fun time in KL.

But ultimately, it is being in the company of the Tembusu people that made the trip truly memorable.

From the multiple card games to sharing our experiences through meals and drinks, from watching each other blow bubbles with gum to simply chilling at our apartment’s swimming pool, the multitude of interactions is what coalesces to such a positive experience. 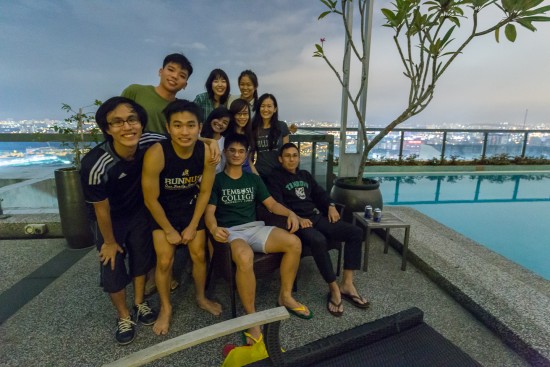 On the rooftop pool of our apartment in KL

Be it on the long bus journeys, walking through the streets of KL, or in our apartment rooms, the conversations and heart-to-heart talks reinforced my belief that I made a right choice in joining this trip.

So, thank you Zhimin for providing the opportunity and bringing together this amazing bunch of people. And thank you to this group of awesome people for bringing my first semester in NUS to such a satisfying close.

Hou Sheng is a year one Arts student planning to major in Psychology. Tries to eat healthy but he is in Shan. Spends his free time playing the guitar, reading and exercising.