The interview started with his customary ‘Hey hey!’, followed by an offer of food and drinks. Moazzam exudes Pakistani hospitality, something he claims he picked up from his mother. Besides having a steady supply of cream cheese and Coke, his room hides multiple bottles of Barbican- on the table, in the drawer, on the ledge. If there are two things that he likes, it’s Barbican and cars.

Not even a near-death experience could dampen his passion for cars, it seems.

Merely a year ago, he was involved in a car accident. Half an hour late for a wedding, he drove at 130 km/h at the highway with his brother and his cousin as passengers. They were on a bridge with an 8-feet deep ditch on the left and a steady line of cars on the right. Speeding along the lane, they suddenly realised that there was a stationary car parked along the road. Impossible to stop in time, their car rammed into the stationary car; with the metallic clang of chunks of car being forced to fit into each other, Moazzam’s car smashed right underneath the boot of the other.

A large portion of his personal savings went into repairing the car, and a huge amount of time went into reflecting on the fragility of life, but fortunately everybody escaped unscathed.

Then again, this is not the first time he felt like he was going to die. During his National Service (NS) days, he was stung by a scorpion in Sabah. Petrified, he clutched his finger so tightly that it turned bluish-black. Guess it didn’t help with his fear when he thought it changed colour because of the poison…

Even as a newborn the doctors found him almost strangled by his umbilical cord.

When he was a toddler of 1 or 2, he was rushed to the hospital for drinking petrol.

Given his sense of curiosity, it’s a miracle that he went through his childhood safely. As a child, he disassembled everything he could get his hands on with a screwdriver. He never said anything about re-assembling them, though.

Growing up, this curiosity translated into an urge for new experiences- exploring new places, meeting new people, doing new things. Speaking of activities, he wants to “try jumping down a building one day. Hopefully with a rope tied to my legs”. Laughter ensues, and he takes another sip of his Coke.

All these are very exciting, of course, but are they what makes him happy? What was he doing during the happiest moment in his life? 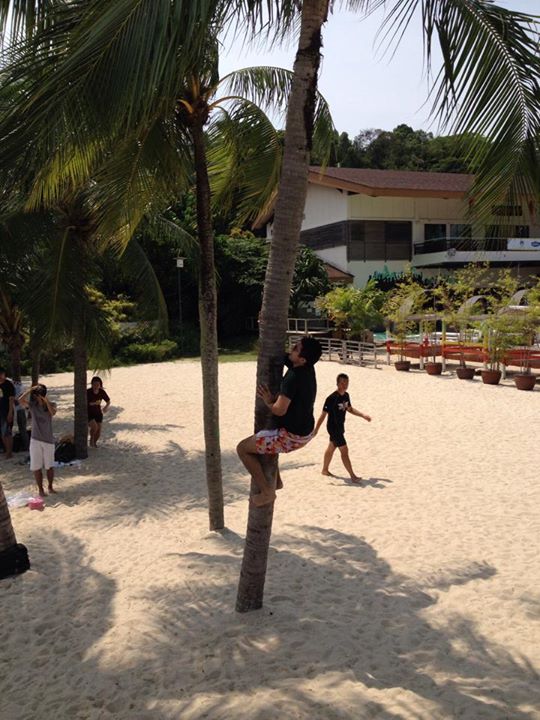 In this photo taken by Fedeline Angela, we can see Moazzam being himself…

He describes himself as a generally happy person- he’s the happiest when he’s surrounded with his friends and family.

Recalling an incident that made a mark in his life, he proceeds to recount his memories as a firefighter during NS. His team encountered a locked door case where a man called for help to break down the door to his uncle’s house. The man was supposed to visit his uncle a week earlier but he didn’t, and he hasn’t heard from his uncle for the past week. When they finally got into the house, what greeted them was a half-decomposed body. The man broke down and cried.

“This taught me how sad life can be if you’re alone.”

It taught him the importance of having family, friends, and people around you.

Moazzam is a dear friend of mine, and in many ways I can testify to his willingness to listen and the sound perspective he provides. Always the logical one, he will list all the possible alternatives and outcomes. His listening ear and rational head have been a lifesaver for me many a times.

As a friend, I am glad to have known him. As a resident of Tembusu, I have high hopes for his leadership.

The header image used in this article is taken by Jeremy Tan.