A gunshot rings out audibly amidst the muffled settings. With every successive shot, a cry of terror can be heard in the background, each one like a plea for help. In the terrible silence that follows, one is reminded of the tragedies of war, the cries of the innocent imploring helplessly against the backdrop of violence and murder[1]. 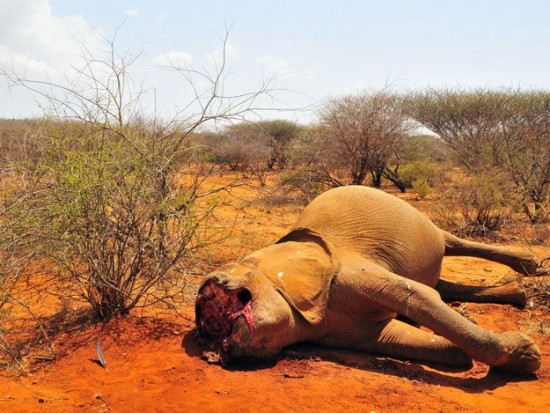 The carcass of Khadija, a mature female elephant killed by poachers near Kenya’s Samburu National Reserve (taken from National Geographic)

Except this is not an excerpt from a war. This audio clip was taken from the Wildlife Conservation Society a year ago, recording the sounds of an elephant attempting to flee from an armed poacher.

Elephant numbers have dropped by 62% over the last decade, leaving only less than 40,000 Asian Elephants in the world today. A more tedious expository into the facts and figures will only further validate our existing awareness of pertinent issues such as elephant-poaching for their ivory tusks, or even being made captive for the purposes of tourism, entertainment and illegal logging activities, and their consequent abuse. One need look no further than the smiling pictures of tourists in Thailand, clad in S$5 elephant print pants and standing alongside the elephants themselves in the dubious-looking conditions of a tourist camp, in order to witness the harsh conditions that elephants are placed in.

Spurred on by gaping holes in current legislation concerning illegal trade and animal tourism as well as larger social and political issues such as deforestation which affects the natural habitat of elephants and unfair business practices underlying the system[2], elephants will continue to be slaughtered and abused in the name of money and leisure, possibly facing extinction within the next 20 years.

But not all hope is lost. The conservation of elephants and the continued fight against elephant mistreatment is a global testament to the compassion felt by many towards this cause. Efforts led by the Wildlife Conservation Society, the Elephant Nature Park in Chiang Mai, and wildlife departments in Africa stand as substantial efforts in making progress to improve legislation and provide better alternative solutions for elephant conservation. Yet, change needs to come  with a quicker and greater force in order to beat the machinations of illegal elephant trade and time. The internet is currently the fastest platform for reaching out to and persuading others to take heed of the urgency of the situation. Awareness is often the first step to move the trend-worshipping masses. So surely it is time for us to lift our laptop screens and head for the nearest social media platform, type furiously our battle cries for war against this atrocity and broadcast it to the world, rallying troops of friends and comrades to pledge their commitment to this cause for the greater good.

But as noble as this seems, is it even possible for a mere group of students to enact change and sound out an audible cry for this cause? The Rector’s Shield team shows us that this is possible. I had the opportunity to speak to Sheeraja, one of the committee members, about this new initiative. Backed by Prof Tommy Koh, the College’s Rector, the Rector’s Shield aims to spread awareness amongst students about endangered animals and instill concern in students for the animals in question. As to why we, the Tembusu community, should care about the animals, Sheeraja’s answer is simple: we are living in a college that organises itself into houses represented by endangered animals.  However, we are accustomed to perceiving the endangered animals as mere plush toys – with soft fur, cute features, and overall cuddliness. This is slightly tragic as it desensitizes  a greater, bloodier issue that lurks beneath their endearing exteriors. It seems a strange notion that these animals should remain as simple mascots, mere plush toys, when more should be done about this problem. Thus, the Rector’s Shield will involve the efforts of the respective houses. Each year, a different animal will be selected from the pool of house mascots to be our main focus on a rotational basis. This year, houses will raise money for the elephant and plan activities to create greater awareness for elephant conservation. A Shield for Wildlife Conservation and Environmental Awareness will be awarded to houses that have demonstrated significant and considerable effort. The winner of which will be announce in the coming week.

So what can students expect to participate in for future conservation efforts? Sheeraja informs me that the team is currently generating ideas for a book on nature and animal conservation that will solicit contributions from fellow students as a pledge of the college’s commitment to conservation. On an educational forefront, the fellows have a part to play in this as well, as they have made plans for an animal conservation summer module that may be offered to Tembusians soon. As empathy is best generated with first-hand experience, the Rector’s Shield effort will also feature a trip to the Elephant Nature Park in Chiang Mai where students will help with the conservation work there.  This will be applicable to subsequent animals-of-the-year as well.

With the plethora of platforms available to Tembusians for helping these gentle giants, the tiniest of efforts by each individual – be it in participating in a symposium or volunteering at an endangered animal park – will come together as a collective effort that will have remarkable consequences on a global scale. Thus, as we sit in the comforts of our rooms, studying for our mid-terms/finals or trying to fit our swathe of activities into limited timetable slots, let us remember our united call to show empathy to the world beyond our rooms, and make a real response to the injustice dealt towards these animals.

About the Author:
Mary Ann shares an unrequited passionate relationship with classical music, art and philosophy, the three things that give her reason to live as well as reason against it. Her parents don’t really understand her and think she’s too artsy-fartsy for her own good. To their relief, she occasionally takes a break from all that jazz to spend time doing her work.