I went to a political rally for the first time last Saturday (September 5), the Singapore Democratic Party (SDP) rally for the Holland-Bukit Timah GRC at Commonwealth. I chose to attend their rally as I had heard a lot about the oratorical skills of Dr Chee Soon Juan, and wanted to witness it for myself.

Since it was my first time, I was going in blind, and the haze, which had an average PSI reading of 89, shrouded the rally in a literal air of mystery, with the floodlights giving off an eerie glow as I walked into the football field next to Commonwealth MRT station.

I perused the tents selling SDP merchandise and paraphernalia, while waiting for the field to fill up with supporters. Along the way, I spotted a man carrying a pole with all the opposition flags attached to it. I approached him, and asked him why he was carrying so many flags.

“Because I support all the opposition parties. Anyone but the PAP,” he replied, with a grin on his face. I later found out he was a 58-year-old bus driver.

As darkness descended upon the field, the crowd, which slowly swelled in size, was strangely calm. Most people near the front of the stage sat down on picnic mats, with some enjoying their dinner.

As the first speaker and emcee for the night, Surayah, an activist and soprano singer, started her speech at 7pm, the crowd took a little while to warm up to her, but went wild when she added: “Dr Chee Soon Juan is not the monster or psychopath that the PAP is painting!”

The second speaker, Sadasivam Veriyah, the SDP candidate for the Bukit Batok SMC, started off with a bang, saying that the PAP wanted to win “not to take care of your welfare, but their welfare,” which the partisan crowd lapped up with glee. 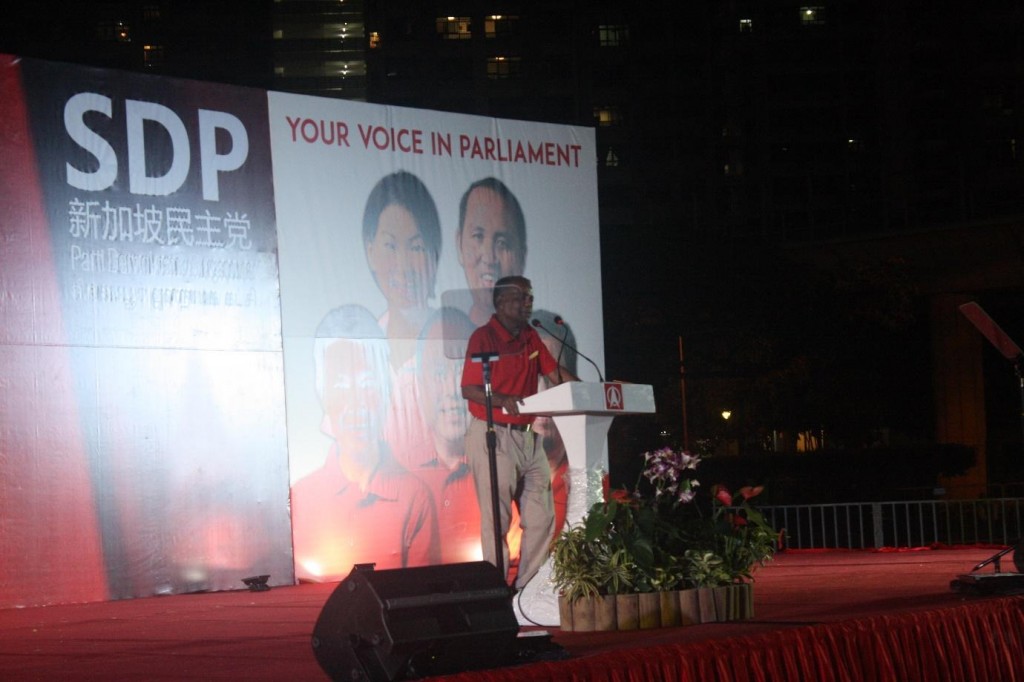 He talked about transport fares, and proposed a cut of 10 cents per trip, which drew cheers of support. He then talked about his time when he was in the PAP in the 80s, and touched on foreigners, as well as SDP’s much vaunted minimum wage system of $7 an hour. This drew noticeably less cheers. 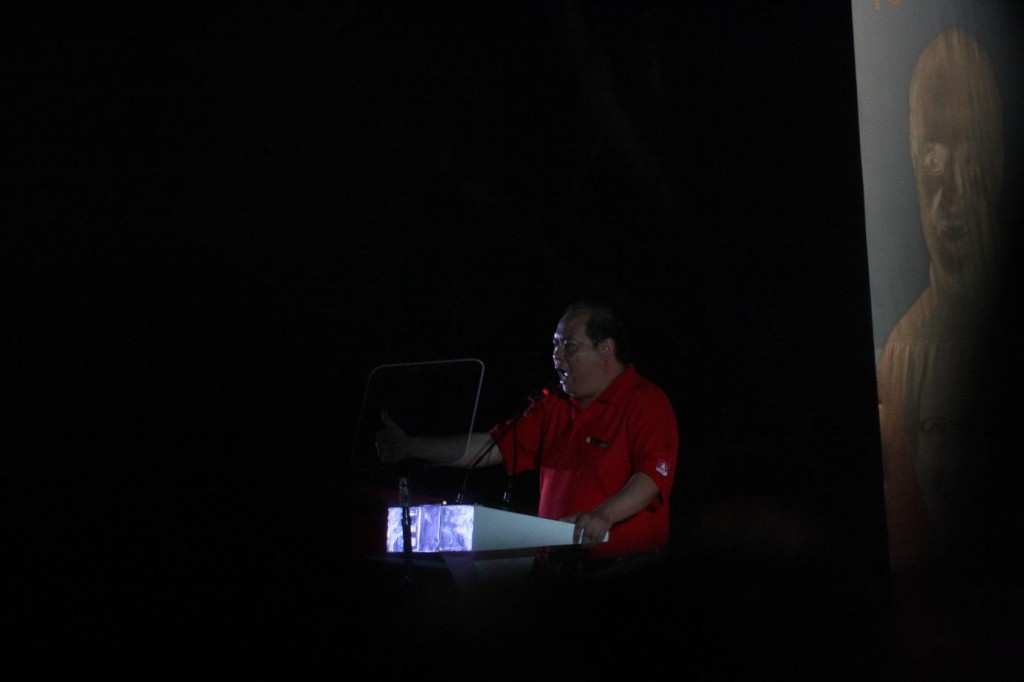 As the third speaker, John Tan, a SDP candidate for Marsiling-Yew Tee GRC, gave an animated anecdote, what stood out for me was two shouts from the crowd: 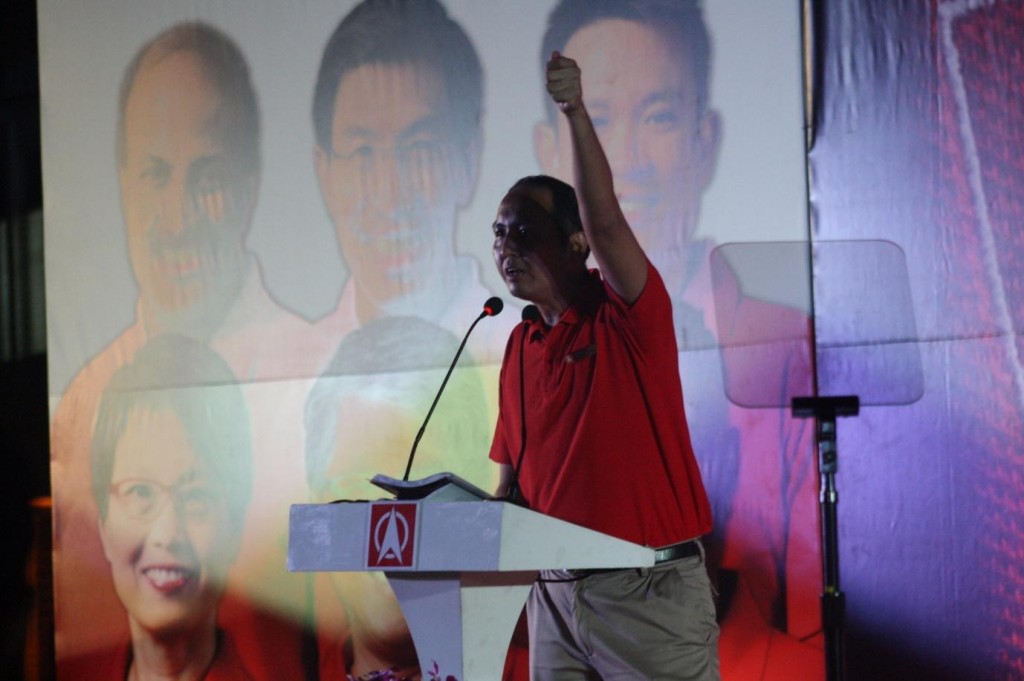 Bryan Lim, the fourth speaker, also a SDP candidate for Marsiling-Yew Tee GRC, spoke in Chinese, which I couldn’t catch, but the Chinese-educated amongst the crowd seemed really enthused by what he said. An elderly uncle beside me pumped his fist with gusto at the end, chanting “SDP! SDP!”

At this point, the crowd, which had steadily increased in size, was growing a bit restless at having to listen to candidates who weren’t in their constituency. That changed with the introduction of the first Holland-Bukit Timah GRC candidate, Sidek Mallek. 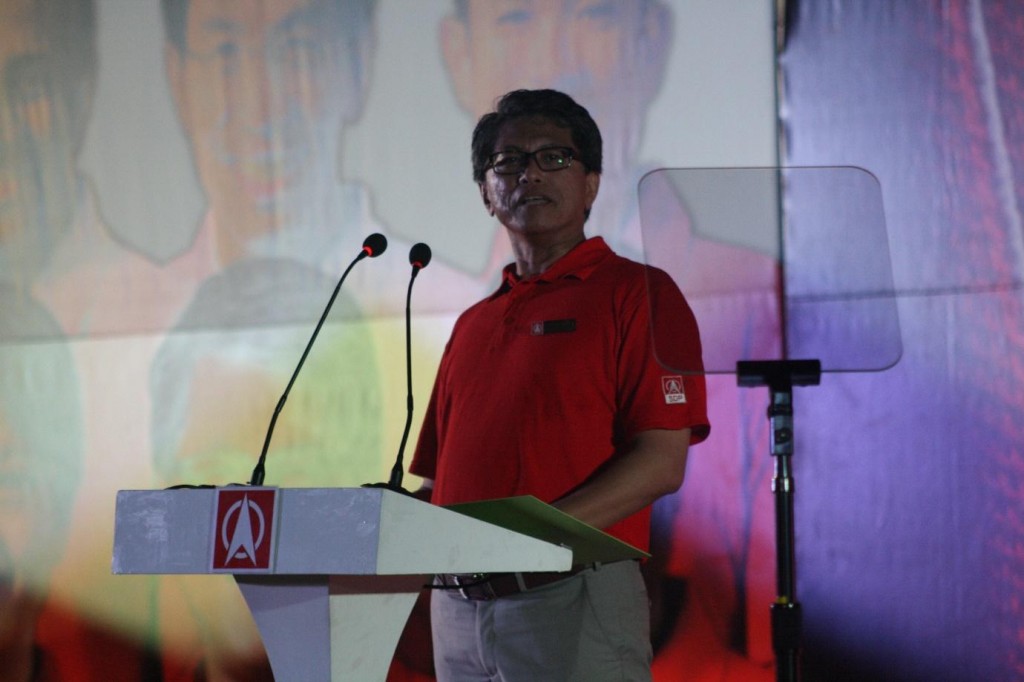 Mallek spoke in Malay, which pleased several members of the crowd, and put to bed any doubts people had about his ability to speak in his native language. He spoke about the SDP not being xenophobic, and played up equal opportunities for all Singaporeans. He ended with the shout, “Majulah Singapura,” to which the crowd replied, “Majulah SDP!” 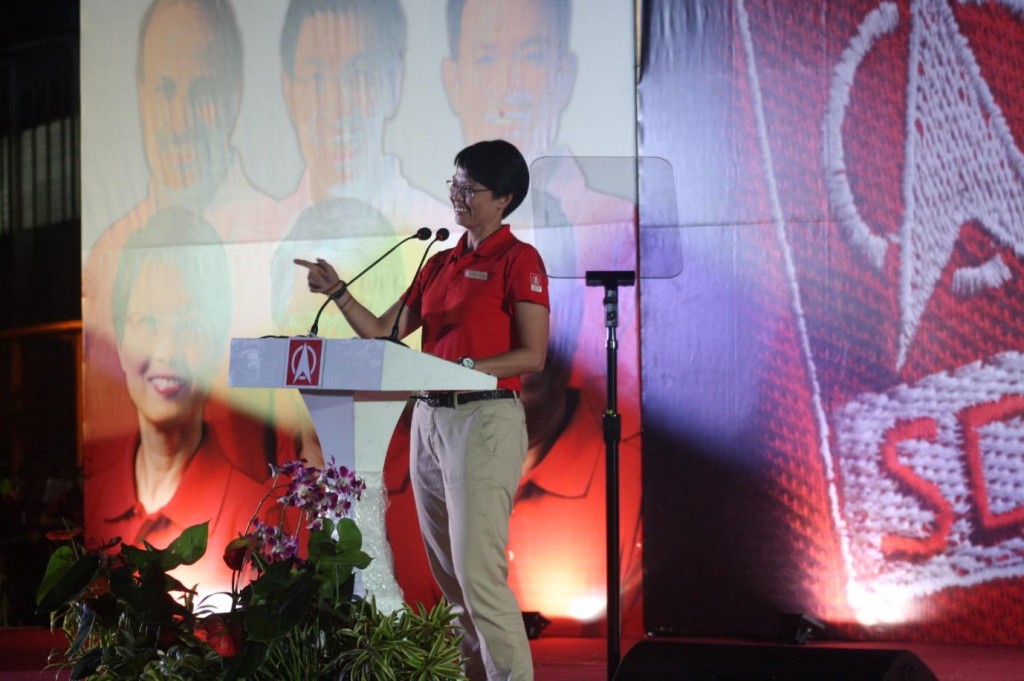 The next speaker, Chong Wai Fung, seemed amazed at the turnout, and asked how many people there were attending a rally for the first time. A sizable amount of the crowd raised their hands, to which she commented, “I’m flattered!” 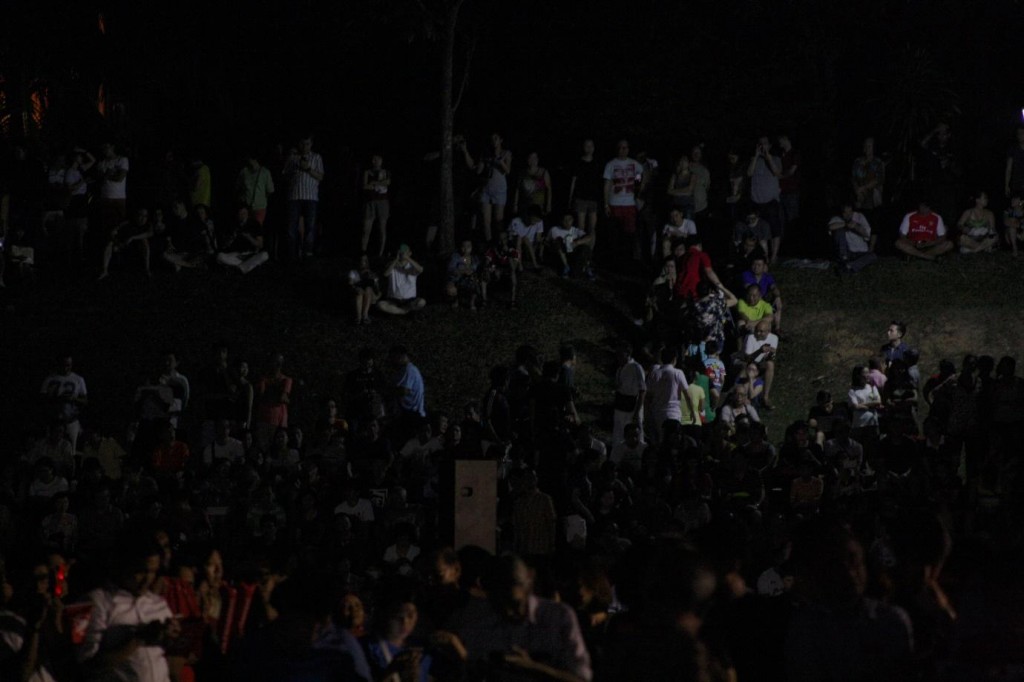 As the emcees led the crowd in chants of “SDP! SDP” in preparation for the next speaker, Dr Paul Tambyah, several members of the crowd grew a bit restless and could be seen shuffling off. 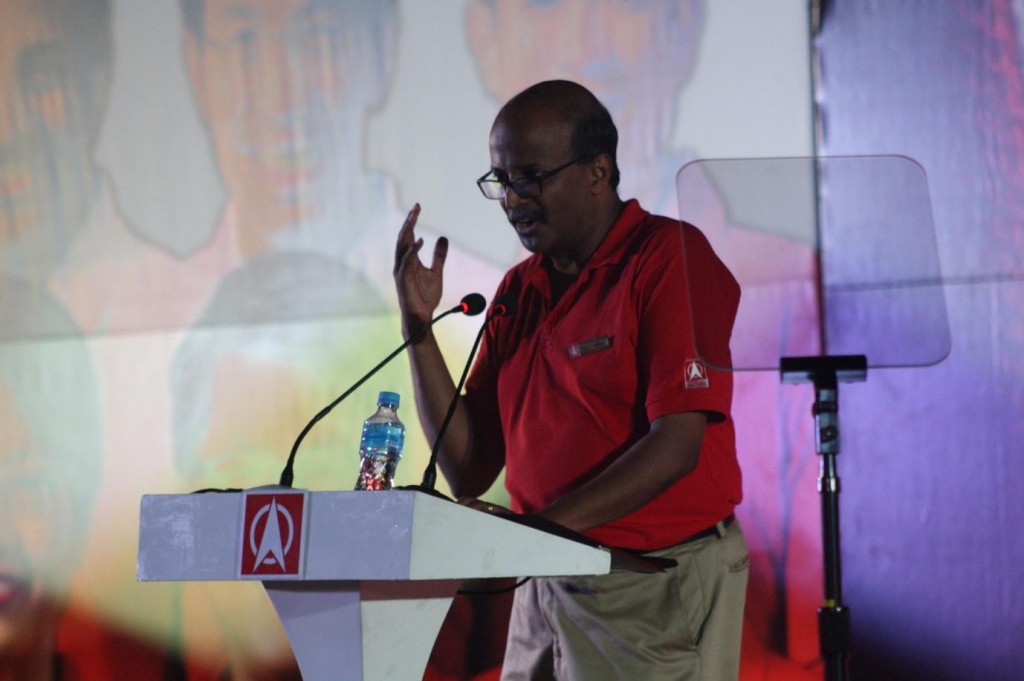 Dr Tambyah’s speech was markedly different from the rest’s, as he zoomed in on the topic of healthcare, which he had the most experience with, being a professor with the Department of Medicine at NUS. He mentioned how after he gave a speech about SDP’s healthcare plan in 2012, he was promoted to a full professor with tenure in NUS, ‘to everyone’s surprise’, which elicited laughs from the audience.

“We are adults, please tell the PAP to stop treating us like children,” Dr Tambyah said, which drew cheers from the audience, and when he mentioned Dr Vivian Balakrishnan’s name, the partisan crowd booed. 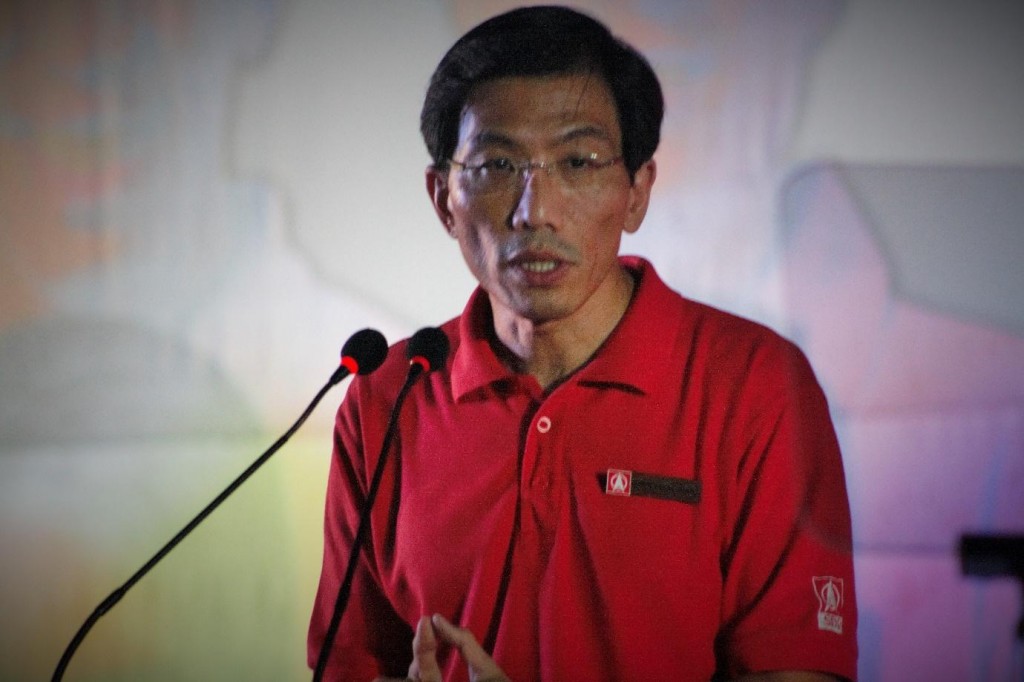 Finally, Dr Chee Soon Juan, the Secretary-General of the SDP, made his appearance. The crowd, which had been relatively docile until this point, rose to their feet, chanting “Chee Soon Juan! Chee Soon Juan!” To everyone’s amusement, a man shouted: “See you in Parliament!”

As he began to address the audience, a hush fell over the crowd. Next to me, a strange thing occurred. A group of people, whose view was obstructed by some of the people who had risen to their feet, asked people to sit down, which everyone complied with. It was so well-mannered and in good nature, that I wondered if I was still in Singapore.

Dr Chee was eloquent, charismatic, and knew how to work the audience. Rarely referring to his script, he went on to talk at lengths about how the PAP’s policies had only led to Singaporeans being stressed, and cited a lack of planning with their policies, especially the inflow of foreigners.

“I would rather be honest and not get into Parliament, than to lie to you and be in Parliament for all the wrong reasons,” he added, drawing whistles and cheers. While his oratorical skills were undoubtedly the best amongst all the candidates, there was a slightly awkward moment when he quoted ‘If’, a poem by Rudyard Kipling, as it went over everybody’s heads.

As Dr Chee ended his speech, the crowd rose to give him and his team a standing ovation, while several people surged to the front to get him to sign their copies of his book. I slowly made my way towards the MRT station, listening in to various conversations around me.

“I think I will vote for them, they got a very good plan!”

Slowly the field emptied, with the crowd basking in the post-rally glow. On my way home, I felt like I had truly witnessed a rare event. For almost three hours, Singaporeans not only listened to the political rhetoric of the candidates, they were politically frank, withholding none of their views. That was something rare to witness.

I can’t vote this coming September 11, but I chose to attend the rally out of curiosity, as well as a need to feel the sentiment on the ground. It was an eye-opening experience indeed. Whether or not you can vote, whether you support the PAP or the opposition, it is worth attending a rally today, the last day of campaigning, with no expectations or pre-conceived notions to witness one for yourself. After all, it only comes around once every five years.

All images by Isaac Neo.

About the Author
Isaac is a Year 1 FASS student, intending to major in Political Science. He wants to explore and understand the world, but is content with just surviving in university for now. He loves the works of Haruki Murakami, and finds the magical realism in everyday life.