On the evening of 12 October 2017, Tembusuians were treated to a three-hour showcase of rhetorical prowess. Rhetoric, in a sense of “the art of speaking or writing effectively”.

Dr Janil was speaking to Tembusuians as part of Tembusu’s public policy interest group Polity’s “In the Eyes of…” dialogue series.

Dr Janil is a rising political star. First elected as Member of Parliament on 7 May 2011, he was appointed as Minister of State on 1 January 2016 and promoted to Senior Minister of State on 1 May 2017. He is also Chairman of OnePeople.sg, a national body championing racial and religious harmony in Singapore.

Throughout the three-hour dialogue session, Dr Janil made his mark on Tembusuians’ minds with his enthusiasm and oratory skills. He articulated the government’s stance on hot-button issues – replete with candour and humour – eloquently.

Some may find his humour comical while others may find it condensing. His jokes may either tickle or rub someone the wrong way. To me, some of his jokes were off-colour, while some were on-point. I appreciated his candour, but not necessarily his humour. 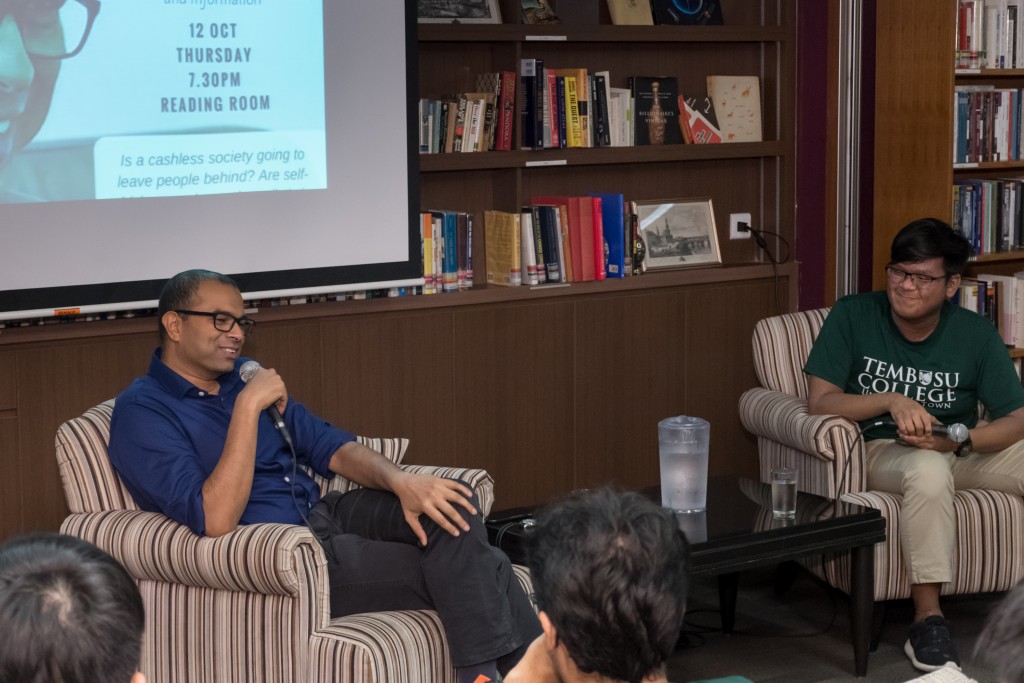 Dr Janil Puthucheary sharing a laugh with the audience.

As might be expected, Dr Janil was quizzed on the controversial ascension of Halimah Yacob to the presidency. Dr Janil first clearly laid out his position, that the government made the changes to the Elected Presidency in the context of multiculturalism being a multi-faceted issue. He articulated the five points in the government’s position:

Dr Janil acknowledged that from a meritocratic point-of-view, race has nothing to do with the abilities of the President to discharge her duties.

Nevertheless, Dr Janil described the changes as “strengthening” our multiculturalism and explained that the singular aim of the changes was to put in place a mechanism to ensure minority representation, which could change over time. 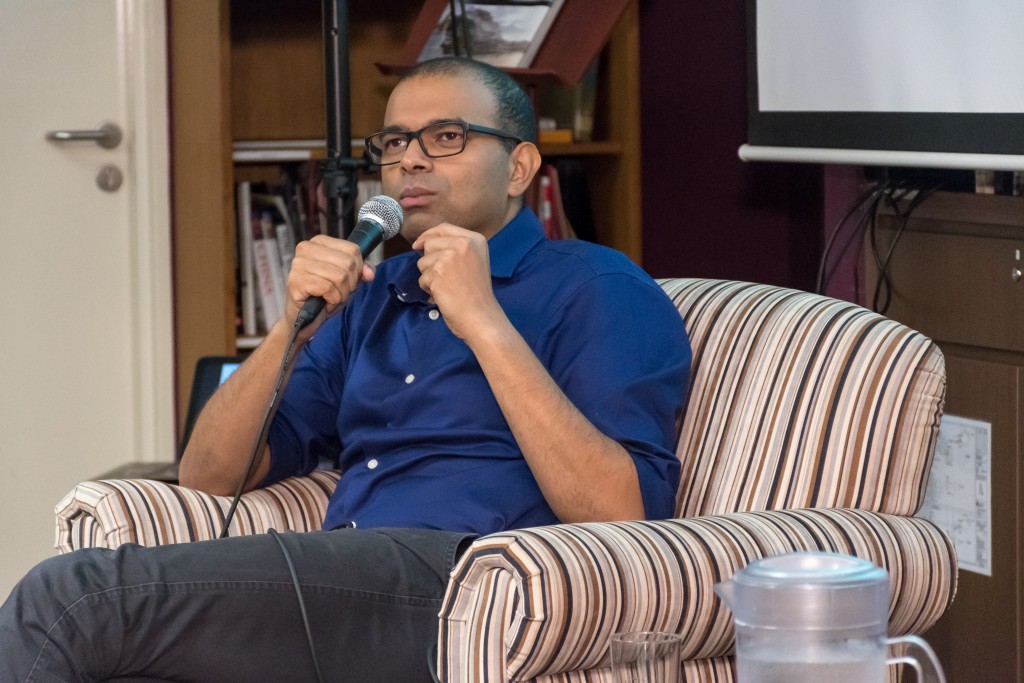 ‘Not a conspiracy theory.’

“The idea that we would spend political capital, two years, change the Constitution, just to block one person is ridiculous.”

Dr Janil emphasised, “It was not a conspiracy theory.”

Dr Janil was questioned in hindsight what could have been done better to improve the optics of the Elected Presidency.

He said, “Significant policy changes should not be done in a time of distress”. He pointed out that as Singapore’s economy matures, it is the norm for the economy to grow at a slower pace (from about 6 percent annual growth in the decades past to about 2 percent annual growth now). And if the economy tanks and times were hard, unemployment would affect racial communities differently, he explained.

On the lack of election, he remarked jokingly if the discontent was due to missing out on a public holiday. In this instance, I thought his sense of humour (laughing at, instead of laughing with) conveyed a dismissive attitude and came across as patronising. A friend who also attended the dialogue with Dr Janil was more blunt and unforgiving, retrospectively calling out his remark as “coffee shop talk” and “gutter politics”. A fellow Treehouse writer posted this on Facebook:

Watching a spin doctor up close, I am pretty amazed in a good sort of way. Every country needs them.

I can only wish to be as good as him in identifying the various strands of an argument, diagnosing whether it can be defended, and writing off those you can’t as fallacies.

Dr Janil refuted the charge that the changes were rushed through, saying, “For a change to a law, two years is a long time.” He pointed out that, in fact, plans for the changes started after the 2011 presidential election when the Election Commission wrote to the government on the eligibility criteria.

On the charges of conflict of interest given the lack of an imposition of a time bar for a political party member to run for the presidency, he posed how does the passage of time eliminate one’s historical ties to a party. He said that the financial sector generally imposes a time bar for a key appointment holder for a different reason as it is for analysis of financial transactions. While he acknowledged that not having a time bar is not good for the optics, he asked, “Should we be doing things for optics?”

“How much do you want the optics, the politics, the presentation to drive our agenda?”

Dr Janil said the changes to the EP were “politically risky but morally right”.

When questioned why not have a reserved prime-ministership, Dr Janil pointed out that there is an electoral block and that it is purely a matter of internal party choice. There is also the GRC system to ensure minority representation in parliament, he said.

Dr Janil added there is “plenty of space” for civil society and that is his reason for doing the Channel NewsAsia documentaries on race and religion – to demonstrate the “OB” (out-of-bounds) markers are “way out there”.

In response to a question on the perceived international legitimacy of President Halimah given the critical reports of her “election” in Western media, Dr Janil posed, “So how was President SR Nathan treated?”

“There are a lot of alleged informed commentary going around, please don’t be so naïve to believe all of them. They all have their agenda.” 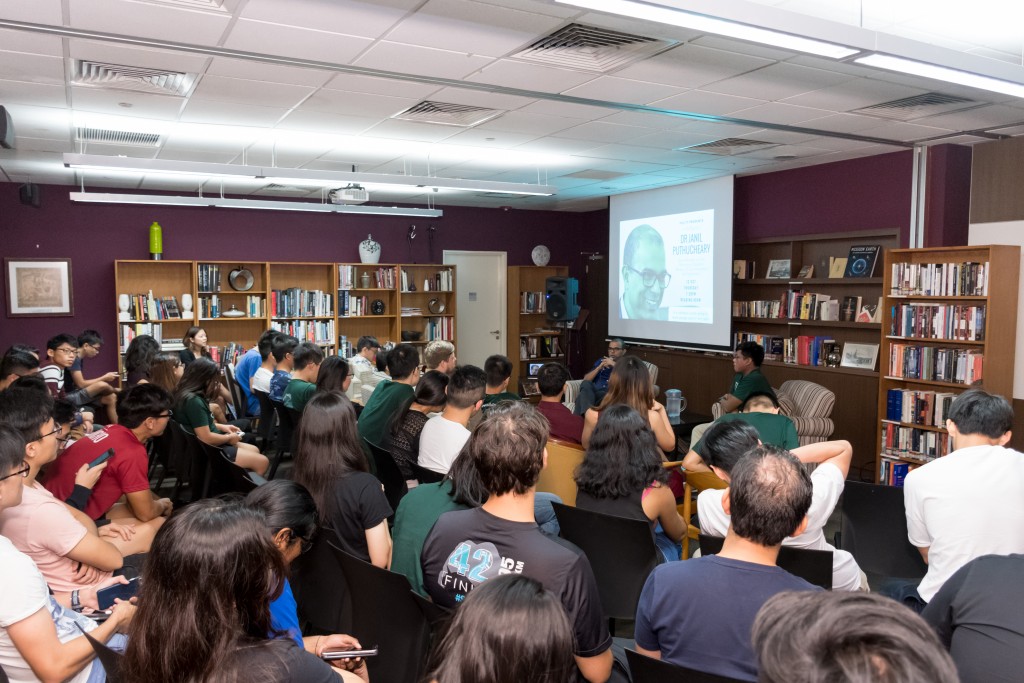 When asked if being a doctor in a hospital or a politician is more stressful, he said the two jobs are “qualitatively different; just completely different”.

As a doctor, his stress comes from wondering if he had delivered the right treatment. But as a senior physician with 20 years of experience, he said he had a coping mechanism.

In contrast, as a junior politician, he said he has to deal with “angry mob of students, grassroots constituency, people who believe in conspiracy theories”.

When asked what his public persona is, he replied it would be “navel gazing” to think about his persona. He said he would have to divorce from his philosophies as a scientist and that there would be no way to be objective.

He said he tries “not to get caught up” with how people perceive him. “Is persona important?” he asked. He said, more importantly, there is a “need to engender trust”.

It was getting late, and the moderator was about to draw the dialogue to a close. Dr Janil quipped, “Oh I’ve got time, I suppose it’s not past your bed-time.”

Dr Janil is also the Minister in charge of GovTech, the Government Technology Agency, which is part of the Smart Nation and Digital Government Group under the Prime Minister’s Office.

In light of the recent cyber-attack on the United Kingdom’s National Health System (NHS), Dr Janil was asked if Singapore’s Smart Nation push might expose the Republic to cyber-security vulnerabilities. Dr Janil said as that specific cyber-attack was limited to the UK, “we are doing ok”. He shared that during his time as a doctor in KKH, the hospital would practice manual workarounds as part of contingency efforts. Dr Janil elaborated that the government is beefing up efforts on cyber-security on the capability (Cyber Security Agency), law and military (Defence Cyber Organisations) fronts. He added that cyber-security is important to Singapore’s economy: Singapore needs to maintain its status as a trusted data centre.

Finally, it was time to end the dialogue and present Dr Janil with a token of appreciation. Still, in character, Dr Janil remarked, “It’s a thumb drive! Did you not hear what I said about cyber-security?” 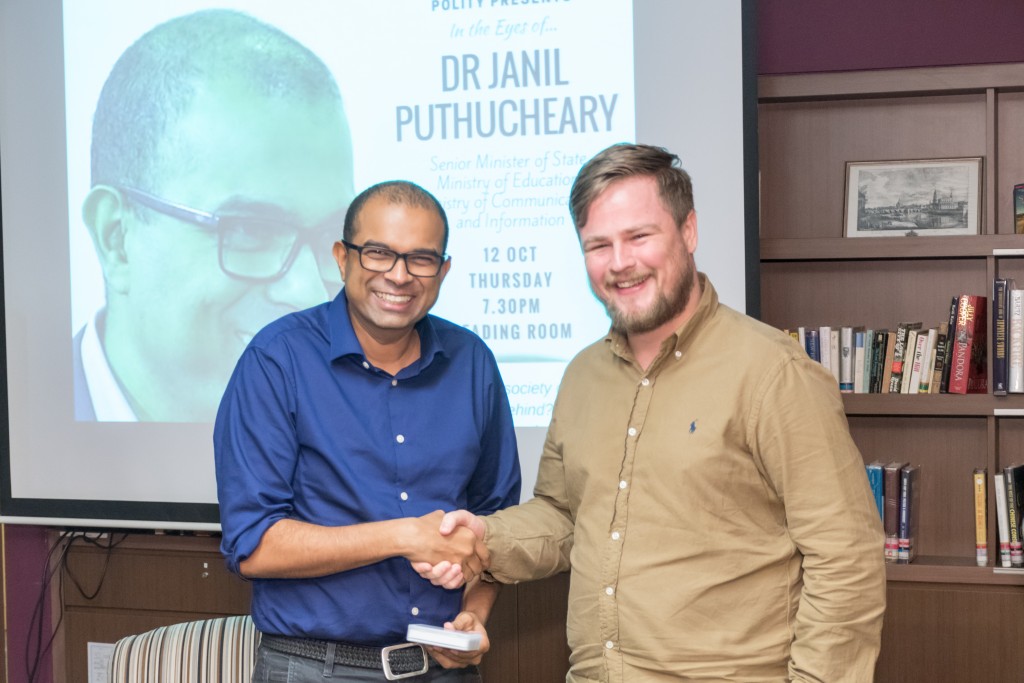 Bryan Kwa has a keen interest in current affairs and is a Political Science major. He mulls over the relationship between political institutions and the negative liberties of humans. The ‘invisible hand’ of the market fascinates him and he also ponders about the nexus between industry and political power. He dreams of upholding the fourth estate: posing hard-hitting questions to the powers that be and holding them to account.